We had severe wind today but by golly, we were going to have a pumpkin carving and BBQ no matter what! Sparky is nuts about Pumpkin Master carving kits and wanted the grandkids to have a shot at carving a "master" pumpkin......The kits are GREAT at making you look like a master carver, turning out really cool pumpkins! We'll show you later, but first things first..... The awning toppers were in trouble! 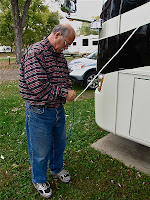 We waited all afternoon for the winds to break so the kids could come to the campsite. Wind gusts continued up to 45 m.p.h. The wind was so strong! My table decorations were blowing all over the place...waa-a-an-n-h! The topper over the biggest living room slide was stretching to the max. Eldy decided to make another bungee cord/rope tie down like he did for the bedroom slide. He hooked two bungees to the two ends of the rope, threw it like a lasso over the top of the slide, and on the first try, was able to get the rope and the bungee over the full length of the topper, and down the other side. Then he attached the bungees underneath on the slide bars. 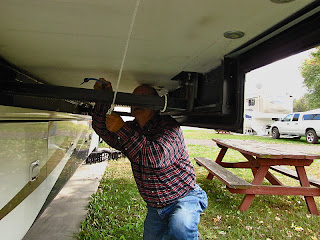 Even with the bungees and the rope holding down the topper, it was still stretched to the max. 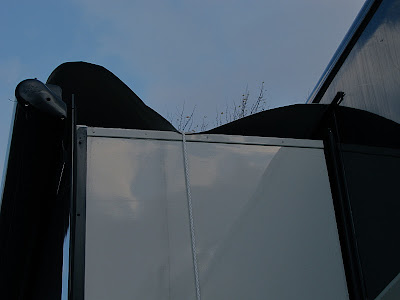 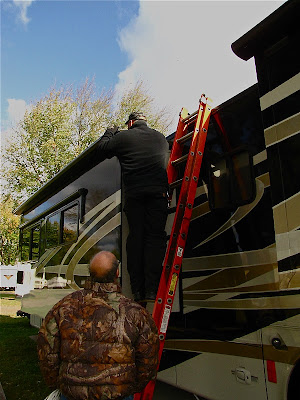 The excess really worried us, especially after we tried to bring in the slide and the canvas remained all the way out. So we called Coach Net, the RV Roadside Service that we paid for, and they sent out a mobile service called Michiana Crossroads Services--a heavy truck/trailer and RV mobile repair unit. Rod Barrett is the master mechanic who came out to help us today, and he was excellent.  He arrived within the hour, and by the time he got here, the spring mechanism on the awning topper roller recovered a bit from the constant wind, and during a brief period of no wind, the awning topper retracted itself into a more normal position! Basically, by the time the tech service guy arrived, the problem had fixed itself! He checked things out anyway, tension seemed ok to him, we ran the slide back in and out, and the topper performed the way it was supposed to! Geesh! It was like--deja view all over again just like the car refusing to make the noise yesterday for the mechanic! 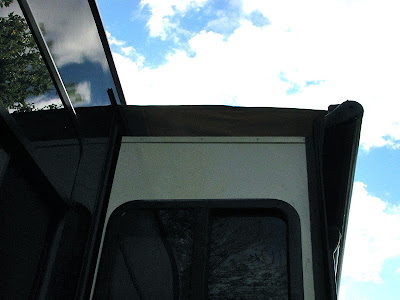 Now that the topper is behaving itself, we kept waiting for the wind to die down, but it remained gusty even late this afternoon...Change of plans! Sparky packed up some of the table decorations and we headed over to Brian's house, Eldy's son....we'll have our fall fest over there...Hopefully, we'll carve the pumpkins outside, BBQ, and have a campfire later! We'll see you later!
Posted by Jeannie and Eldy at 11:30 PM