This highway road that we traveled to get the changes in climate from the Arizona desert to the Canadian-like forests is called the "Sky Islands Scenic Byway" because it gets its name from such biological diversity as the Arizona desert floor to the Canadian like pine forests. By the time you get to the top of Mt. Lemmon, the surrounding mountains are like "islands in the sky." 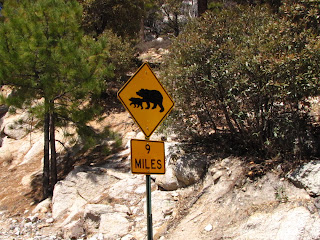 We've seen all kinds of signs throughout our travels---moose signs, armadillo signs, cattle crossing "open range" signs, and my favorite--"Watch for animals" signs (geez, that's a lot of help! What kind of animals? deer? roadrunner? prairie dogs?) and panther crossing signs...today we saw our first "bear crossing" sign...watch out for bear the next 9 miles, but we didn't see any bear! 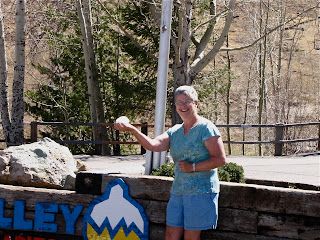 This beautiful highway is one of the only paved roads leading to the top of Mount Lemon, the southernmost ski resort in the U.S. We did not see any ski activity, and only a little bit of remnants of snow. But I got excited to see snow in Arizona! And I even made a snowball and threatened to get Eldy with it, until he pointed out the "No snowplay" sign at the resort....must be quite a few people get the itch to have a snowball fight if they are transplants from somewhere else, like me! We were hoping to have lunch at the restaurant at the top of the mountain but it was closed on Mondays and Tuesdays, so we went looking elsewhere.


We saw many, many serious cyclists on the highway climbing up to the top of Mt. Lemmon, and coming back down. This is a major training venue for professional cyclists apparently. I can't even imagine the dedication and stamina it takes to ride a bike from 3,000 feet starting at the BOTTOM to the top--9,000 feet, but they were doing it!  On  the way down, we passed a lone female cyclist who was boogying down the mountain, doing at least 40 m.ph.h.! Yikes! 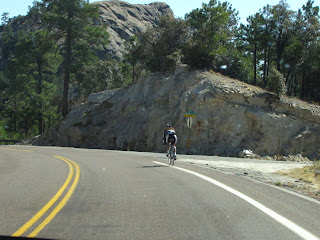 Partway down the mountain, we saw a little community nestled in the foothills of the mountains. There were lots of log cabin houses and a lodge. This area was called Summerhaven. They had a really cute little restaurant called the "Cookie Cabin & Pizza"...it was great! 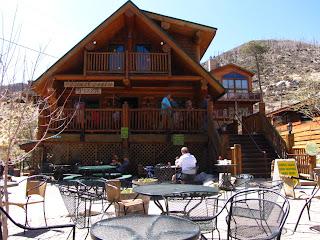 This drive was about a three hour drive from the start of the byway to the finish, but you could easily spend another couple of hours exploring all the overlooks and taking time out to photograph the fantastic scenery...see the little ribbon road down below? That shows you how high up we are.... 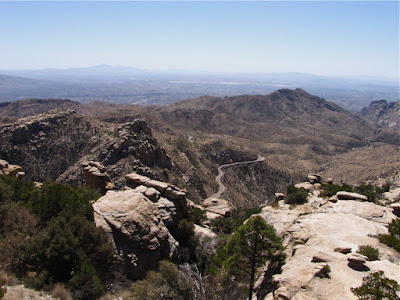 Wherever we go, there's always a risk taker who wants to get out and look over the edge of some precipitous canyon or rock ledge...usually, it's me! But this time, it was someone else. And we usually see somebody's parent nearby, if it's a young kid, saying, "Ok, honey, that's far enough! C'mon back! You are making me nervous!" This young woman's mother was a nervous wreck watching her daughter go right out to the edge to look down...made me nervous, too! 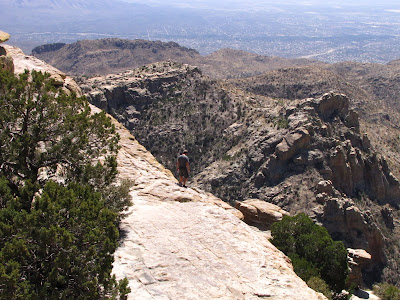