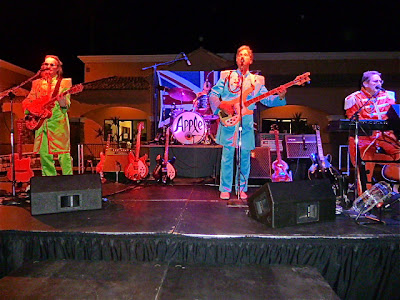 Palm Creek knows how to throw a good end-of-season party! Since MANY of the residents are leaving in the next two weeks, they had a farewell party. They had a great band this evening called "Apple". They were a Beatles sound alike band and they were terrific! They also had a beer wagon...2.00 a beer, wine cooler, and pop for 2.00. Many tables and chairs were set up outside for the residents..tablecloths and all. Dinner and dessert were served earlier and then the band played from 6:00-8:00 and kept the residents hopping up to the dance floor outside. It was a beautiful night and warmer than it has been the last several nights. The park is beautiful at night with all the palm trees lit up with little white lights every night. 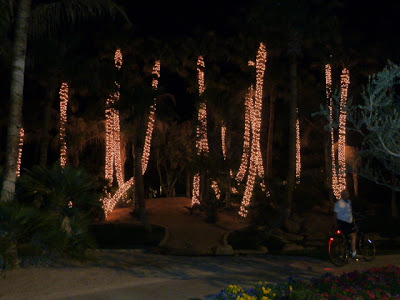 We were very comfortable outside sitting at the table. We didn't dance much because Eldy has some kind of tendon inflammation on his heel. So Nurse Sparky has been having him ice it up and taking ibuprofen.

I have to say, he's not very good about following nurse instructions but as the pain is getting a little worse, he's decided to follow his nurse's recommendations a little more closely.

Earlier, I took a pickleball lesson for the first time...I had already bought my racket, knowing I would love it and I did. Palm Creek has great instructors available, and a unique round robin setup where you can get lots of experience playing several times a week. You don't always have to have a partner, the round robin setup lets everyone play with a variety of partners. You start out at a 2.5 beginner level, and monitors and instructors are available courtside for tips and instructions and to suggest when you are ready to move to the next instructional level. Having played tennis and racketball all my life, I'm ready to progress! Now I just have to get some games in to improve my skills. Pickleball takes a little getting used to as far as how hard to hit the whiffle like ball. Scoring is a little complicated, but the best way to figure it out is to take a lesson, then get out and play! As soon as Eldy gets his heel in better shape, he'll be right there with me.

We've got a scenic drive planned soon...we'll let you know when and where....see you on the road tomorrow!
Posted by Jeannie and Eldy at 11:32 PM

Email ThisBlogThis!Share to TwitterShare to FacebookShare to Pinterest
Labels: party at Palm Creek