This is about as close as I'm gonna get to being a Jimmy Buffet "Parrothead". Although I really like Jimmy Buffet, I probably won't go to a concert any time soon, nor will I be making a fantastic, crazy hat to wear at one of his concerts...so here's the next best thing: 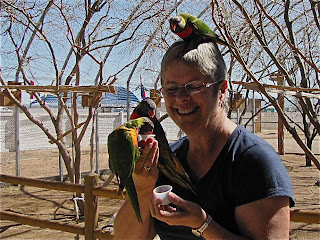 This was at a great place just down the road from Arizona Hideaway Campground on I-10, right near Picacho Peak State Park....it's called the Rooster Cogburn Ostrich Ranch. It seems like this would be more for families with children, but I'm a kid at heart, so I just had to go see this for myself...For 5.00 a person, you get to go in and feed animals such as ostrich, deer, donkeys, and lorikeets (those beautiful birds that are all over me). That's 'cuz I'm so sweet! (You sure are! says E.) Aw-w-w-w, thank you, honey! Actually, it's because I'm holding some of the sweetest nectar in the world. The lorikeets see you come in and in a matter of seconds they are all over you. And if you don't get the top off the little cup of nectar fast enough, they help you take the lid off with their beaks! They can be VERY aggressive! 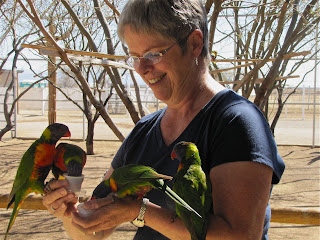 Feeding the ostriches is a little tricky. They tell you the method to use, which is slowly and calmly to raise your arm up high with some of the pellets in your hand, so the ostrich raise their necks and stretch out to take it from your hand, but these birds were GREEDY and almost fought over getting the food, so they LUNGED and I panicked...I missed seeing the feeding advice posted on the sign so my method was--
RUN from feeding tray to feeding tray (on the top of the fence) down the line, THROW the pellets in the tray, and hope I didn't get pecked by the ostriches. They started at the first tray and went almost as fast I I did down the line. They have no teeth, but boy, can they peck HARD! I went through a cup of pellets in NO TIME! I missed the trays some of the time and they scrambled to get the ones that dropped. Eldy was much more patient in how he did it, so he was more successful in making his food supply last a little longer. If you don't want to be eyeball to eyeball with the birds playing "Dodgebird", you can pour pellets in feeding cups at a lower level. 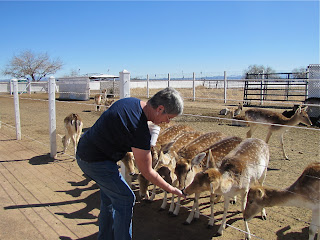 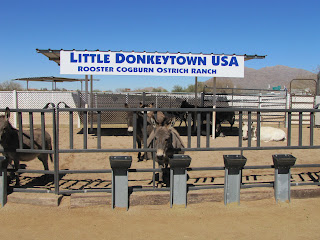 The same pellets are the ones you feed the deer and the donkeys with, but I was most interested in the lorikeets. They like to play with your hair, earrings, whatever you have on. It was a really fun experience and for 2.00 more, I could have gone another time into the bird enclosure, but I couldn't get Eldy to go in a second time. It made him a little nervous to be a target for a possible little present from the lorikeets, I think! One of the birds stuck his tongue in my ear---ew-w-w-w-w-w! You can also go for monster truck rides on certain days of the week. They didn't offer that this day.... 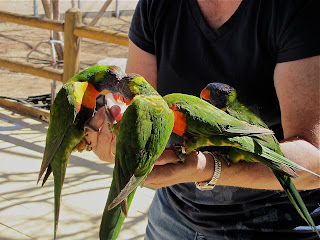 They sure are beautiful! I guess they shi** like the nectar they drink...in a stream as they fly. Luckily, we didn't see any of that, we were just told that if you wanted one as a pet, this is a drawback to having one in your house, uncaged. Gee, why would you do that? I dunno.....but just a forewarning in case anyone gets the idea they'd like to have one of these at home....Eldy took photos while I fed them, but they still landed on him and pulled at his sunglasses string. We were done in just a few minutes, but could have spent more time just watching the birds. There is a little souvenir store there with ostrich eggs for sale--man, they are HUGE! Also tee shirts and some other stuff...then, the Picacho State Park is nearby, just a minute or two from the ostrich ranch. There are some great trails to hike there, and you can hike to Picacho Peak if you want...we didn't do that today, but some other time we might. The park was going to be closed by the state of Arizona, but nearby cities rallied together and contributed to keeping the park open.  Hope it continues to stay open for a return visit next year!

Tomorrow we move to a different park in Casa Grande, called Palm Creek RV Resort. This is quite a place, we'll tell you more about it tomorrow. They are offering quite a few specials so we are going to take advantage of them while we are in the area.....see you later!
Posted by Jeannie and Eldy at 7:45 PM