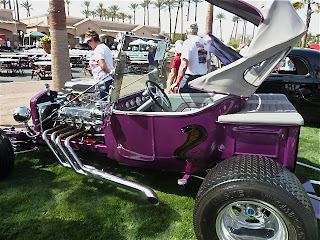 Hey, guys, what, you didn't care for the sewing blog?  Ok,...here are some muscle cars for you, engines and some classics....Forty cars turned out for the seventh annual "Good Ole' Days" Palm Creek car show...beautiful weather, and beautiful cars.....tons of people. The show was from 10:00 AM to 2:00 PM...50-50 raffle, food, entertainment, great way to spend part of a Saturday! 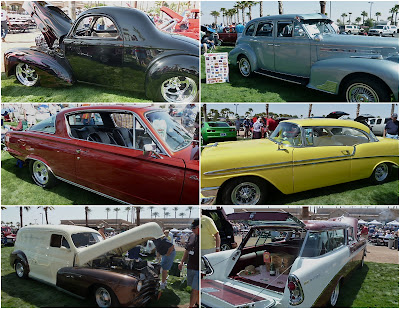 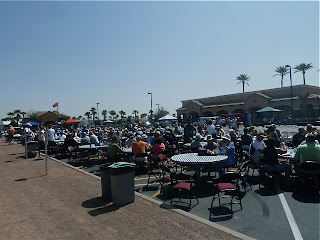 There were special cash awards--Budweiser's Choice, Mayor's Choice, People's Choice, Most Car Club Entries, and one for the "Good Ole Days Theme".  I saw one car that had an old fashioned car hop drive in tray hooked onto the window. That would be a great one for the "Good Ole Days" theme! There were great shirts for sale and a few other vendors. They have great hamburgers here....the burgers were so good they ran out before we could get any! They also served beer and wine today at the car show...I'm telling you, this is a fun place! Great turnout as you can see from the crowds.....

If I knew my cars better, I should have done a "Guess the make and model car contest" and given away a prize, but you'll just have to enjoy the photos and reminisce about what kind of car you drove in high school! I drove an Opal GT little sedan that my mom got for me so I could drive to my first paying job as a lifeguard in Lake Forest, IL back in 1968. How about this Mustang? Ni-i-c-e!
Or this 1965 Chevy SS? 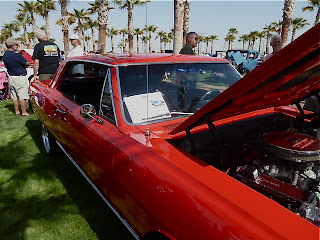 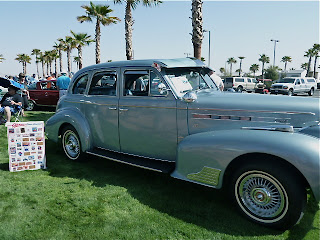 Eldo drove several... He says his very first car was a 1955 green Ford Fairlane, then he had an uglier than dirt Studebaker Sportsman (he doesn't remember what year it was) , a a 1958 green Chevy Impala, a 1963 maroon Chevy Impala, and a 1965 Buick Skylark Buick convertible. (Sparky wants to know, how come so many cars, dude?) Eldo says, remember, these were cars that cost a working teenager about 100-150 dollars at the time so he went through the cars like women went through pantyhose! 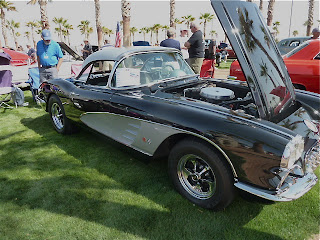 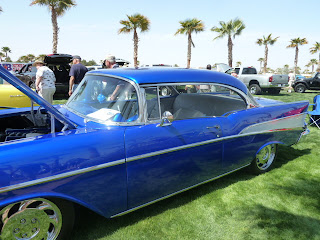 What kind of car did YOU drive in high school? 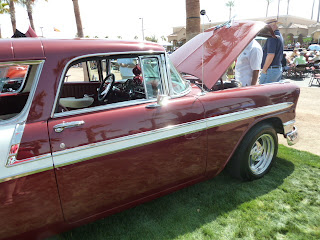