Boy, did we get suckered into something we had NO IDEA what it was all about. I had heard there was a golf cart rodeo late in the day yesterday, so I decided to check it out and take photos of the people in it. I didn't know WE were going to be in it until we got there. All of a sudden, I'm sitting, blindfolded as the driver of the golf cart and Eldy is the navigator. I cannot see a darn thing, and he's going to be instructing me around an orange cone obstacle course as the driving school instructor, Dennis Hill or in our case, Nick Russell, the head honcho of the rally, points to Eldy which way to go through the course cones. Eldy had to follow Nick's pointings to get me through the cones.

I said, "WAIT a minute! Do you have liability insurance? Are you SURE you want me to be the driver?" That didn't get me out of the driver's seat, so I tried again..."HOLD ON! I give better directions and Eldy follows them better, I wanna switch!"  Nope, nada, sorry, the women have to drive, and the men have to tell them where to go...." HA HA...Eldy is looking nervous at this point, at least I think he is, because he knows that I AM AN EX-STOCK CAR DRIVER (at age 40, placed third in the Powder Puff at Plymouth Speedway in Plymouth, IN--seriously!) and Sparky is not called Sparky for nothin'! She is not the SL-O-O-O--W, take it easy in a golf cart kinda gal...I tried one last time..."WAIT A MINUTE, GUYS!" I holler out, still blindfolded. "I HAVE ONLY DRIVEN A GOLF CART A COUPLE OF TIMES!  WHERE'S THE BRAKE?" But then I heard...... "You-- are-- being--- TIMED".

And those were the magic words, folks. That's all it takes to get Sparky's competitive edge juices flowing..I took off like a bat outta hell...I jammed that gas pedal as soon as Eldy said go forward, I jammed that gas pedal as Eldy said, "Now RIGHT, HARD RIGHT! HARD RIGHT!" By the time I was told to go left, go right, go straight, no, no, hard left, hard right, NOT SO FAST! SLOW DOWN! I started getting a little disoriented. I decided what the hell and did a donut --360 spin to get off the damn cart. I'd had enough! What I didn't know was I almost ran Nick Russell over in my haste to get off the course and follow my own path...(which she ALWAYS does anyway...says E.) Now Nick is a tubby kind of guy and the only time I think he would run fast is to chase down his wife, Miss Terry, for a big kiss.... I ripped off the blindfold and had I not gotten crazy with the donut swing around and finished the course properly, we probably would have had the best time... Nick was panting and sweating, and I wondered why--all he had to do was walk around the course cones and point to Eldy which way I was to negotiate the course! Course I didn't know I had almost caused him cardiac arrest by deviating from the course and jammin' the gas pedal, aiming right towards him! I said, "Nick...does this mean I won't be in the rally next year?" And he says, "10-4, good buddy!"  And then he adds, "If you were, I'd be TASTEFULLY dead!"  HMPF! 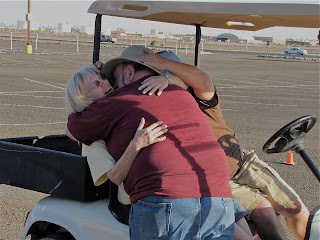 Then, Dennis, the RV driving school instructor, (a terrific teacher, by the way, and everybody would benefit from his classes) got blindfolded and his wife, Carol, got into the golf cart next to him. Eldy got to guide them through the cones. Dennis looked like he was peeking. Nick said, "Dennis, are you cheating?"  "Nope!"  "Can you see, Dennis?"  "Naw..." "Can you see ANYTHING? Are you SURE you can't see?" Dennis insisted he couldn't see a thing...so Nick grabbed Dennis's wife, Carol, tipped her back in a big swoosh, and smacked a big kiss on her! (Dennis wasn't peeking....he passed the test, but it looks like he suspects shenanigans from the way everybody is laughing hysterically, he's grabbing Nick in protest)....Dennis proceeded with ultra caution through the course...so much caution, that the jibes started coming...."Dennis, we have dinner reservations at 6:00 tomorrow night. Do ya think you could drive a little faster?"   "Dennis, I've seen a glacier move faster than that!" and on and on...we laughed and laughed...It was great fun!  It was even funnier to see the husbands POINTING which way to go and gesturing wildly when their wives weren't quite turning fast enough or the right way... (By the way, Dennis drives like a little old lady....SL-O-O-W!) which is what he says to do in his driving school instruction classes...)
Nick's rallys are just really great entertainment...Nick and his wife, Terry, and their crew of volunteers do an awesome job of organizing and running a great rally....we'll definitely see them next year....hats off to you, Nick, your wife,Terry, and Greg and Jan White--good friends of Nick, the main ones I know of that help this rally be such a great success every year.....we had a wonderful time....see you down the road!
Posted by Jeannie and Eldy at 10:30 PM