I saw my first roadrunner today! Cool! More about that in a minute. First, welcome to Jim and Dee from Tumbleweeds....it's great to have new blog "neighbors". After you've been blogging for awhile, you feel like a part of a community, just like you were in your former neighborhood community. Who's reading whose blog starts to overlap and the circle continues to grow...We are starting to get to know everyone better through their blogs and travels. We love it! 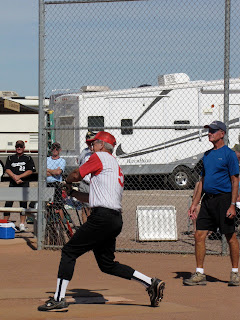 We biked over to the softball field to see the final tournament play ending today. The Palm Creek Rattlers (OUR home team) were playing another team for the final championship. They won today! I don't know much about softball, having never enjoyed playing it, but there are league age brackets and experience brackets from what I understand. If you love the sport of soft pitch softball, there's a league for you! Many of the guys on the field were in their 70's!  A pitcher for one of the other teams was pitching today and he was 82!!!!!  Awesome! Eldy is thinking about joining it for next year if we come back. (Uh-oh! says Sparky...I see injuries in the making, here. Looks like Eldo has been bitten by the weekend warrior syndrome. You know, where the old athlete in you awakens from a deep sleep and says, I can do this!) I'll bet Eldo can! I know, I can be his trainer! (Uh-oh! I'm not sure that's a good idea, says E.)

It was a BEE-YOU-ti-ful softball field...just as green as green could be, like an oasis in the desert. After watching the guys hustle and run around in the hot sun, I heard somebody say, "Roadrunner ALERT!"  BEEP, BEEP! Of course, the birds don't say that, but I almost did! I turned around and there was a very pretty roadrunner. When he saw me about to take his picture, he turned his butt to me and started waving those L-O-O-N-G tail feathers back and forth, back and forth--swish, swish, swish!" as if to say, "WELL! Think you're going to take my picture, hunh? I'll give you my best side, my butt!" I finally got him when he turned sideways. He preened himself a bit...Then soon, he walked off at a brisk pace, er, race walked or whatever it is that they do on the ground....he didn't fly....of course he ran very fast! Beep! Beep!

We really enjoyed the game today...great facility...great hamburger stand--they cooked fresh hamburgers on the grill for the game watchers today...very reasonable prices...Eldy talked to a guy in his seventies today who plays all over the country all year round...incredible!  He says the field at this park pales in comparison to some of the softball diamonds in other resort parks around the country....whoo-eeee...glad the economy is healthy in some places, at any rate!  We'll see you tomorrow..my turn for Zumba classes again....I'm working out the kinks after the last class I took a couple of days ago!