Where Did the Day Go?

Eldy went to visit old school chums this morning, and Sparky stayed home to have a day to herself to get lots accomplished. HA! Good intentions, anyway....She was hoping to start her tee shirt quilt.....But lots of stuff got in the way that needed attention....A pine needle basket with damp needles that needed to be used up today before mold gets a hold and starts growing in the next day or so.....Here is the start of her third one.... 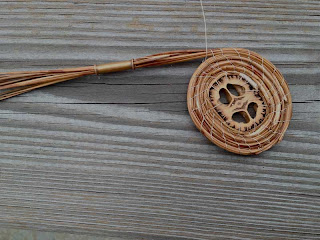 Pickleball lesson and practice for a couple of hours, more sitting and watching than playing, but that's ok, Sparky is still trying to learn how to keep score.....Came home and worked on the pine needle basket for awhile...Concentrating hard, when Sparky heard, "GO NOTRE DAME!" She looked up, saw a couple in a red truck, gave them a thumbs up, and called out, "Where are you guys from?" as she noticed they had a Notre Dame license plate on the front of their truck. We had been wanting to catch these guys in the red truck since they had a Notre Dame plate on the front. The guy says, "That's our hometown. We're from South Bend/Mishawaka." Sparky starts to walk towards the truck, saying, "Me, too!" when the guy takes off his sunglasses.

"RUSS?????? Is that you???????" It was Russ Kintzele and his wife, Barb. Russ taught at the same elementary school that Sparky did, North Side Elementary School in Mishawaka, IN, before it was torn down and a new school built on the old site. Russ has been retired for about ten years, his wife about five, and they are at  Sun 'n' Fun for the rest of this month and February! They are from Mishawaka, IN. It was like coming home and seeing a long lost family member. North Side Elementary was a tiny little school, the staff very close knit and like family. It was really really great to see them today. They stopped and chatted for about an hour and finally, it was time for them to go. They were headed to Venice Beach to look for shark's teeth. :-)  They have found a LOT of them on their last visit, like EIGHTY! The secret is to use a special little basket/shovel for sifting through the wet sand. It's called the Florida snow shovel.   :-) 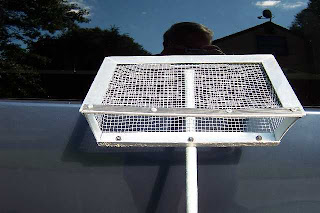 You can find them at Walmart in Sarasota for about 18.00, he said. But you could use a colander, or just your bare hands, we just thought the Florida snow shovel was a great idea. We're going to get together again with the Kintzeles when Eldy can be here to meet them. They are terrific people!

Eldy met HIS school friends in North Fort Myers today...They chatted up a storm for over three hours, catching up on everything! Bob and Sue Jimison are from Colorado, about 30 miles northeast of Denver. Sparky REALLY wants to go to Colorado this summer, and Bob and Sue want us to come. We were going to go last summer, but the wildfires kept us from heading that way. Apparently, they are not getting the snow this winter, and are worried it's going to be another very hot summer with wildfire prone conditions. We hope not!

For supper, we checked out Sarasota Ale House located off the Bee Ridge Road exit. It was delicious and very reasonably priced. How about a 12 ounce prime rib special for 12.99--including coleslaw and potato?  Sparky had 35 shrimp, cole slaw and baked potato for 9.99.  It's a sports bar and noisy, with LOTS of TV's. It's a chain...But the food is good! So recommended if you like places like that......

It was a wonderful, happy day for the both of us to be able to connect with old friends again....See you tomorrow!
Posted by Jeannie and Eldy at 11:25 PM