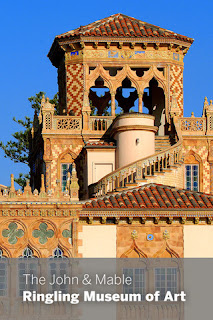 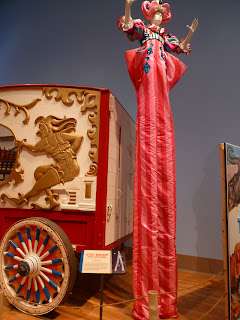 It was going to be rather cold today...Kerry only had one more day to visit, so we decided to go to the Ringling Art Museum in Sarasota.  It was rather pricey at 25.00 a person for an adult, children under 12 are free, but we felt it was well worth it! Note: On Mondays, it's FREE to get in to the art museum, not sure about the circus museum, but Kerry wasn't here on a Monday, so we had to bite the bullet and pay full admission. Sparky didn't do enough research on what you get to see for the price of admission, it was a little confusing once we got there. There's the circus museum, the Ringling's summer home mansion--the Ca' D'Zan, and a fine art museum. The gardens and grounds are on 66 acres of bayfront and have 13 historic banyan trees, a waterfront Promenade (walkway) and Mable Ringling's Rose Garden. The Ringling's house is the largest historical mansion on the west coast of Florida. The art museum has a collection of European, American, and Asian artworks along with contemporary and modern art. The link above to Ringling website will help anyone interested in seeing this. There's also an app--Ringling Museum Guide for iphone and one is available for Android.

You definitely need to go even if you don't like the circus. Sparky really doesn't like circuses, and REALLY doesn't like clowns, but after touring the museum today, she really became interested in the whole circus thing.

BUT-- we toured just the circus museum today....and we could have spent HOURS looking at everything. It was fascinating! It was colorful! It was visually stimulating! The museum has the "Wisconsin", the Ringling's private railroad car, beautifully carved parade wagons, rare handbills and art prints, wardrobe stuff, and all types of circus equipment. 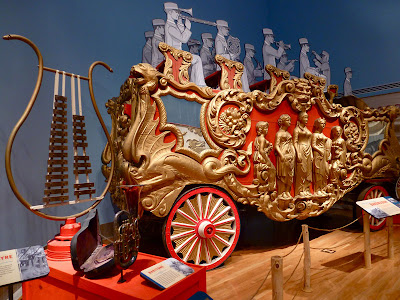 They also have a store there. Grandma Sparky, Kerry and the baby had a great time in the store. Three kids were in there, squeezing rubber clown noses in front of the baby, and he was laughing heartily. The little girl said, "I think he needs one of these." Kerry voted not to get one, it had a dangerous string on it. The little boy was fascinated by the baby's "Cars" socks. 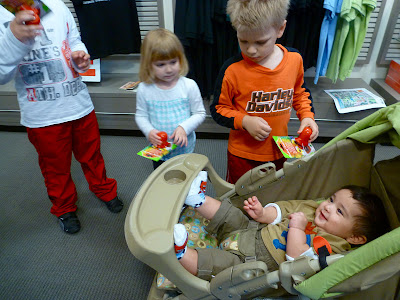 Did you know that whiteface clowns are the oldest type of clown and have the highest status among clowns? They are usually the serious character in a clown skit. You can watch a video of a clown applying his makeup, explaining what he's doing. 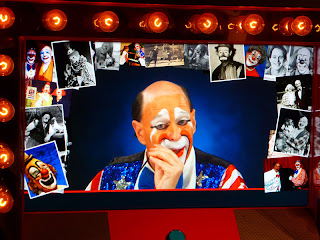 There are character clowns who embody an every day ordinary sort of person like a tramp or a grandma. The most familiar type of character clown is the hobo or tramp. Emmett Kelly was one of the most famous tramp clowns of his time--"Weary Willie" from the depression era. 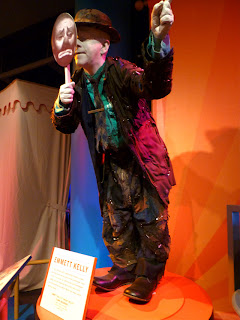 One of the most amazing exhibits is an entire room set up in miniature to 3/4 inch to the foot scale full size circus. It has eight circus tents, 42,000 objects in a 3,800 square foot exhibition space. It's called the Howard Brothers Circus Model and was designed by circus historian Howard Tibbals. It shows the Ringling Circus when it was at its largest size. You file into the room and it takes you on a tour of the circus coming to town, complete with audio and visual cues as you are looking at the exhibit. 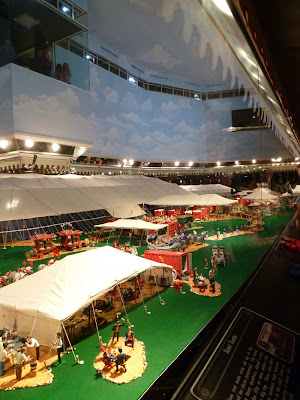 All around the room as you walk the perimeter of the circus are plaques that explain from start to finish the arrival of the circus trains coming into town, the setting up of the tents, the shows, the parades and everything that goes on behind the scenes. It was VERY interesting to read how much preparation was made in advance, how the circus "city" was fed, what went on behind the shows, etc.

Continue exploring the museum and you will find out all about the different functions of advertising for the circus---how the posters and signs set the stage and revved excitement for the coming circus by using outrageous exaggeration and alliteration. The circus was a highlight/event of the year for many communities and towns all over the nation....

How the spectacle display was the opening feature of the show...beautiful costumes, elaborate floats, exotic characters, elaborately costumed animals and performers hinted at the excitement to come in later performances. Elephants were made to look like lobsters or butterflies, or swans with elaborate costumes with hundreds of thousands of beads and sequins. A single elephant blanket weighed up to 200 pounds, and used 75 yards of fabric. 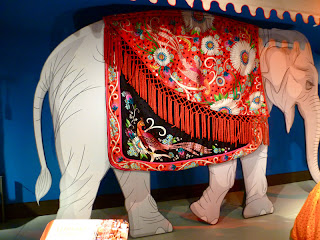 You can walk the wire....a real wire the width of the cable that the high wire performers use. Of course, it's on the ground, but fun to try and keep your balance anyway! You can be part of a circus poster, see if you can fit into a clown car, and read all about everything circus. It was wonderful!

You can walk through the miniature gallery hall..... 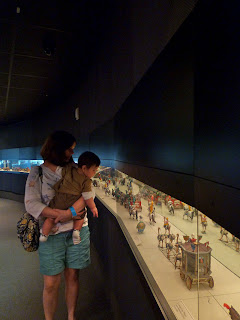 There were cool galleries of music and lights....Sparky's little grandson LOVED it and Sparky did, too! 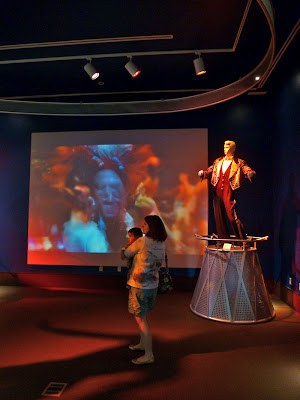 Gosh, this was a cool place....Sparky wants to go back to see the Ringling's mansion, and the fine art museum as well......This is a place not to be missed!  The colors, the decor, the way the museum is laid out, it just is a wonderful visual and auditory experience for all ages...We sure enjoyed our visit today!

We'll see you on the family's last day...It was quite a day! Stay tuned for more fun at Sun 'n' Fun!