After catching up, cleaning up our Christmas decorations and getting our breaths back from a busy week, we headed over to Lido Beach to check it out. It was a very narrow beach, not a whole lot of sand and there were lots of people there since it was a holiday week. 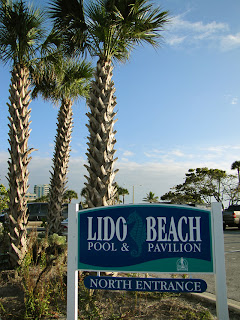 We stayed briefly...long enough for Sparky to check out an entire crab washed up on the beach, something she had seen only once or twice before, and decide that the beach was not as pretty as others we have seen in the area. It was just your typical touristy beach, not as amazing as Siesta Key Beach. 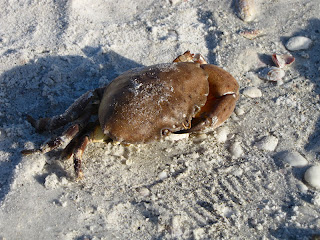 Then we headed over to Sarasota Park. Sparky heard steel drums! It sounded like it was coming from O'Leary's Tiki Bar nearby. We HAD to check that out. Sparky LOVES steel drums, Eldo does, too....It turns out that on Tuesdays and Sundays, Frankie Catalina plays steel drums at the beach bar. So we stopped for a beer for Eldo and a strawberry margarita for Sparky and listened to Frankie play for awhile. He was very good! He plays at O'Leary's on Sundays and Tuesday nights. And on Friday nights, there's a great reggae band. O-o-o-o-h, we're gonna have to check that out! 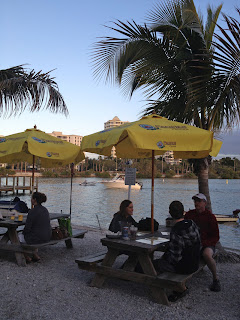 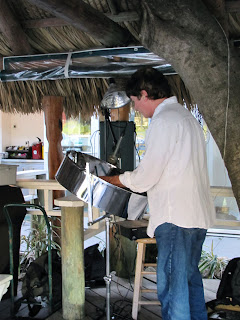 At a table in front of us, were three ladies and a guy, all who were wearing IU tee shirts and sweatshirts. Sparky graduated with a B.S. and a M.S. from IU, so she says to Eldy, "I'm gonna say hi to them before we leave." They proceeded to exchange pleasantries with the neighbors across from them, and Sparky heard them confirm they were from Indiana. Sparky gave them a shout out--"Yay! Fellow Hoosiers!" and they laughed, so we ended up talking briefly from across the tables. Sparky told one of the gals she loved her IU tee shirt, it was one of the coolest I.U. basketball shirts Sparky had seen.

As they got up to leave, the gals came over to our table, and darned if the lady with the cool basketball shirt hadn't taken it off, (she had on another shirt underneath.) She handed the basketball jersey to Sparky. She says, "Here, I want you to have this. Wash it, wear it, and enjoy! I'll get another one at next week's basketball game."  "WOW! ARE YOU KIDDING ME? REALLY???"  Sparky was FLABBERGASTED. Sparky never bought herself a tee shirt or sweatshirt while she was at I.U., not sure why, but she didn't own a single I.U. item. She had just gotten done telling Eldy she regretted never having something from I.U like a shirt or sweatshirt and here the lady gives her the shirt off her back! What a wonderful gesture! There was no way that they could have heard that comment, they were sitting too far away. They left before we could think about getting a photo with them......But here's the shirt! Now Sparky finally has an I.U. shirt, forty years later!  Makes you want to pay it forward...Now that's Hoosier hospitality at its best! Sparky will definitely look for an opportunity to do something nice for someone in the near future. 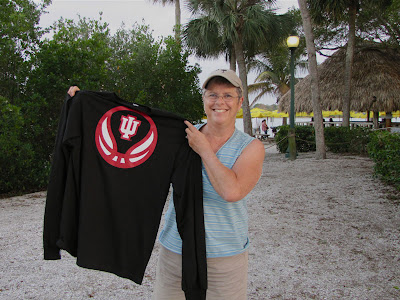 We enjoyed our little exploratory visit to Lido Beach and O'Leary's Tiki Bar and Grill today....