We WERE going to go to the Gasparilla Pirate Festival 2013 in downtown Tampa, but decided too much traffic, too crowded with over 300,000 people expected to attend, too much standing around in the hot sun and not enough knowledge about best places to park, best times to go, and how to get around the city (despite a lot of research) so we talked ourselves out of it. Sounded like fun, though. A pirate ship lands at 11:30 this morning, and the pirates "take" the city after the mayor is "forced" to hand over the keys to the city. A big parade at 2:00 PM this afternoon, it's THE event of the year in Tampa, and has been since 1904. What a tradition! BUT, for the aforementioned reasons, Sparky and Eldo decided let's go bike ridin' instead! So we did!

We recreated the bike ride Sparky did a week ago with the Rusty Spokes bike group from Sun 'n' Fun . Parked the car at Mote Aquarium, turned right towards the bridge, headed over the bridge and 7.5 miles down the road until the Lazy Lobster Restaurant. AHA! You KNEW there had to be a food payoff in there somewhere, didn't you? :-)  Yep, Sparky talked that restaurant up so much to Eldo, that we just had to stop and have lunch to see if it was just as good as last week! But first, the views....Beautiful golf courses,  fantastic azaleas, flowering bushes and bougainvilleas in bloom, AND the palms, too! 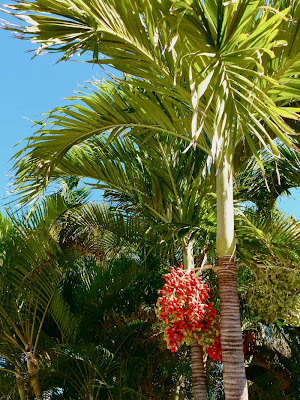 And we stopped at the Longboat Key Beach once again to rest and enjoy the beautiful sunshine and low seventies weather. Not a cloud in the sky today.... 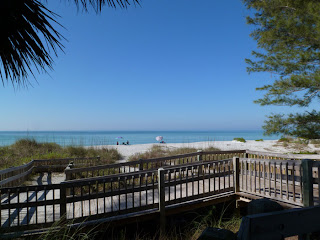 The first time out the route to the Lazy Lobster, Sparky missed the historical marker about the WWII bombing ranges that were in this area on Longboat Key. In the 1940's, bombing targets were set up along Longboat Key. Later, skip bombing was tried. This is where the bombers would fly at low altitudes and slow speeds, drop a couple of bombs set with delay fuses, and when they hit the water, they would skip and skim the surface like when kids try to skip stones. The bombs would bounce off the side of the ship and detonate, or bounce over the target and miss. A lot of pilots were lost in the Gulf of Mexico on these skip bombing training missions because they didn't pull up their planes in time.
Once in a great while a 50 calibre shell casing turns up on Longboat Key beaches from these training missions.

Well, lunch at Lazy Lobster was fantastic again...Sparky had the burger with mushroom glace sauce, potatoes au gratin and green beans, and Eldo had the fish and chips which was excellent, he said. And we had dessert--a homemade cheesecake that we split. Yum! This restaurant is HIGHLY recommended! 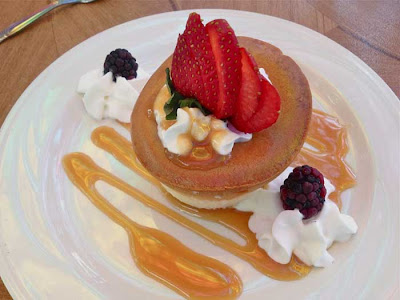 Spark just LOVES the patio atmosphere with the beautiful water fountains, the palm trees framing the patio and the colorful umbrellas adding some shade at Lazy Lobster! 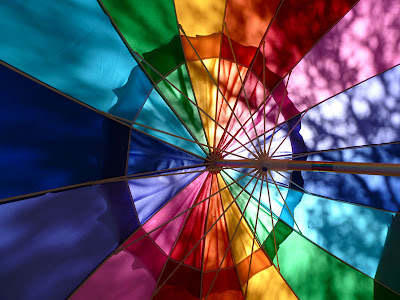 After lunch we wandered through the little shopping center and saw a small Italian restaurant with outdoor seating.... 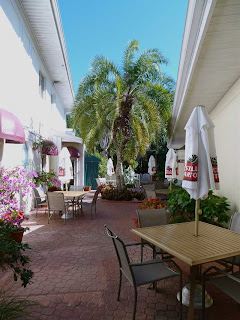 And a gift shop with some wonderful stained glass incorporating large seashells in the designs...Beautiful! 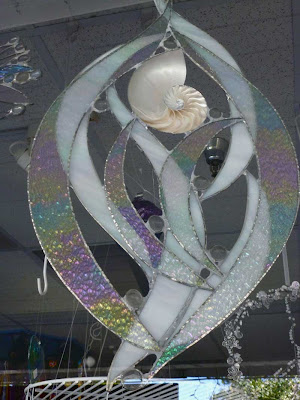 A lovely day in paradise....They just keep coming and coming.. No rain in sight till next week possibly......Until next time.....
Posted by Jeannie and Eldy at 11:46 PM