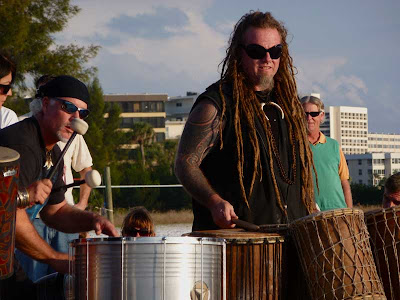 Sparky said she wasn't going to talk about drum circle any more, we've shared a BUNCH of times that we've gone....But yesterday was the PITS!  It was a debacle, (Sparky just wanted to use a big words that had the "d-d-d" sound to it, explains Eldo.) It was a debacle-a sudden collapse and downfall- of what could have been another great experience for the TONS of people that were there as observers. But it wasn't, and here's why..... 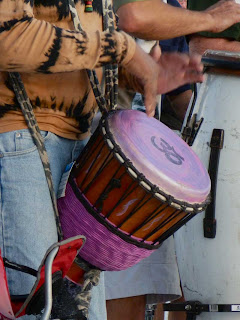 The snowbirds are now here....The beach was busier, there were LOTS more people coming to the drum circle that have never heard of it before....We sat next to two sets of couples on each side of us that have been coming to Sarasota for YEARS and this was their first time to see it. There's so much to see and it's so fun to people watch! Kids have a great time.... 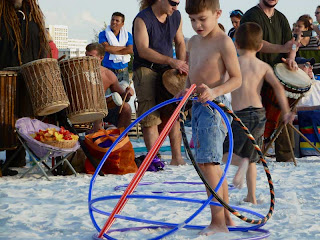 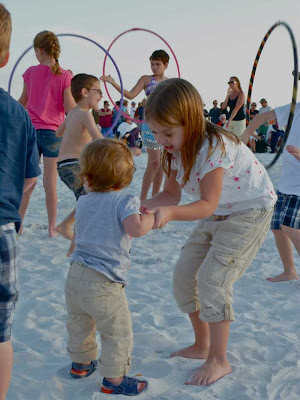 Adults have a great time "letting it all hang out".....This gal had THE MOVES! 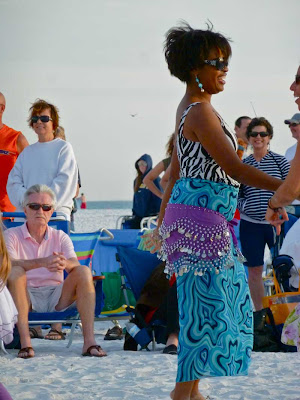 This gal had the spirit! She was passing out flowers to wear in your hair... 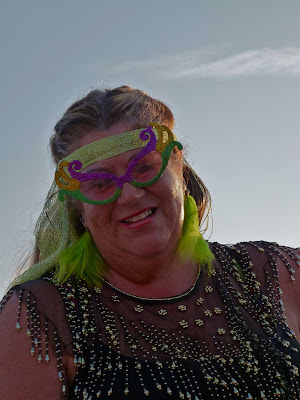 What people don't know is, there is a lot of significance to the drum circle participants. It's a way of bringing rhythm to a community of observers and performers..There are artistic dances that are done that mean a lot to the regular performers. 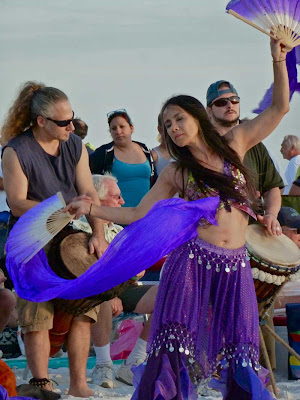 The performers work very hard to artistically present themselves to the public, these being both the drummers, the hoop dancers, and other performers. There's usually a gentleman with a bowler style hat that chants, uses feathers and does his "thing" before the drumming really gets going. We think he is performing some words and actions in honor of bringing the drumming community together with the public, or he's celebrating and thanking Mother Nature for yet another beautiful day in paradise. We're not sure exactly what that's all about, but he's a central figure in the whole event.

About an hour before sunset, the preparations begin. There is a lady who makes a special "altar" each time before the drumming starts. 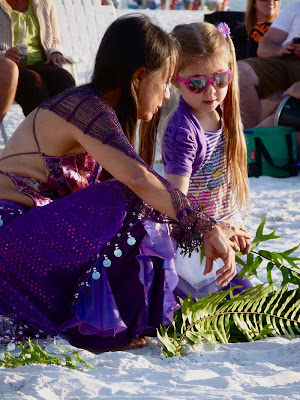 A very big circle is drawn around which the performers and drummers hope the public will sit OUTSIDE the circle and leave the inner circle for the regular artistic dancers and ANYBODY who wants to move to the beat. 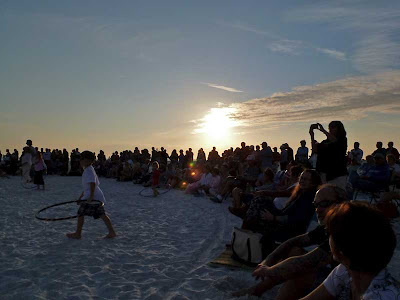 What's been happening the last three times we've gone, is people who don't know any better are not respecting the circle. It's pretty obvious when you first get there that observers are sitting all around the OUTSIDE of the circle. And when you see some of the wonderful hoop dancing, and regular dancing and understand that there is something special going on in the inner circle, you would think that people would stay on the outside and watch, 'cuz there's so much to see! And if you were a good observer, you'd see that if people want to dance, that it's OK to get inside the circle and do your thing! But it's not ok to just stand around and gawk inside the circle.

Lately, the last three times we've been there, the circle has started deteriorating very rapidly. Mothers come inside the circle and plop their little kids down to play, dump trucks and all. Adults come inside the circle to get a close up photo of the drummers, then just stand around and talk inside the circle to their friends. They start blocking the view of the people behind them who have patiently arrived an hour earlier to be able to sit around the circle. (Guess who that is?) We think the circle crashers just think it's a bunch of drummers on the beach since many of them probably haven't experienced the whole thing before and just come into the circle, not realizing it's something special.

There are some general, unspoken rules of drum circle decorum, and here they are:
1) Respect the inner circle. It's for performers and dancers of all ages.
2) Respect the performers' need for space. Hoops are large, swords are sharp! 3) If you want to drum, know that the regular drummers have the honorary central positions at the back ring of the circle. They WELCOME drummers with little or no experience, but it's probably not a good idea to park yourself in front of them, like these two fellas did. They were not in rhythm with the regulars and were not experienced. And they didn't have a clue, either! 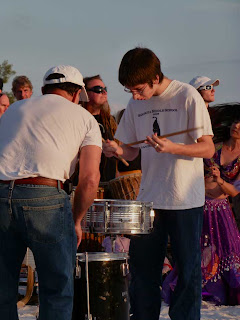 4.) Spread the word about respecting the inner circle!

Sparky couldn't help it, but she started to get annoyed and frustrated about the crowds moving in. Here it's just starting.... 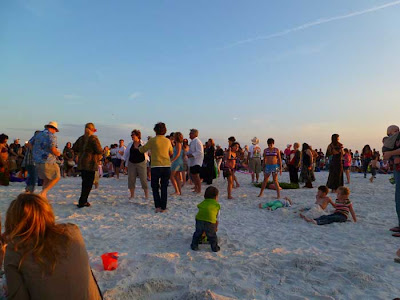 And when she gets annoyed/frustrated with other people's behavior, teacher mode takes over, much to Eldo's chagrin and embarrassment. Sparky didn't think, she just acted. Up she jumped and went over to a bunch of thirty-something young guys and tried to explain that it was a performance circle. The guys just thought she was being a B****, and weren't very conducive to hearing anything Sparky had to say. Sparky went and sat down.  Later, a group of people came and stood right in front of us and didn't have a clue that they were blocking our view. Sparky asked them to move, politely. They did...But it was hopeless. The crowd continued to move in....They didn't even pay attention to the sunset, and that's an integral part of the whole drumming circle thing with the blowing of the conch shell heralding the beautiful sunset.

And finally, after yet another couple came and stood in front of us, and parked themselves there, we left, discouraged.......We're not sure we'll go back to Siesta Key Beach again this year...It's gotten too big and with no means of crowd control, it's just not the same any more....Best time to go is in December and early January, before the crowds get so big, we guess.......