We went to the beginner pickleball lessons at Sun 'n' Fun this morning. What the heck is pickleball, you ask?  It's a great sport that is taking off everywhere around the country, particularly Arizona and Florida, but it's spreading to all parts. People say it's a cross between playing badminton, table tennis or ping pong and tennis. Sun 'n' Fun has a LOT of pickleball courts, the exact count, Sparky is not sure. Not only do they have outside courts, but they have really nice indoor courts, too. There must have been close to fifty people who showed up for the beginner lessons. We had forgotten just about everything we had learned back in Arizona a couple of years ago. We've "dinked" the ball around now and then, where you bat the ball back and forth close to the net, but really hadn't played a game until today. Here's our equipment.....The rackets are like oversized ping pong rackets, and the ball is a smaller version of a wiffleball. You play to eleven points.

Pickleball is a great game for seniors played on a shortened up tennis court about the size of a doubles badminton game with a lower net than tennis so you don't have to reach as much, run as much and you usually play doubles. That makes it even less possible that you will injure yourself doing something reckless. Remember that last statement..... 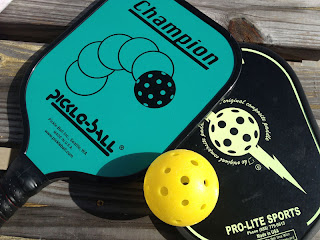 Sparky knew Eldo was competitive and really old school, but realized he was even more so, when in starting the first serve of a practice game, he wanted me to switch so the "a guy would be serving a guy". What that really meant was, "I don't want Sparky to lose the first serve of the game, so let me serve." Sparky said, "Heck, no! I've got the ball, I'm gonna serve." And she promptly lost the serve point. Oh, well!

It was really fun....But Sparky has a heckuva time with the scoring. It's very unusual to her...Not only do you have to keep track of both sides' points, nothing new there, but whether you are server one or server two and when to switch servers and when to switch court position while serving. You change to the other serving court on your side when you score a point on your serve. When you don't get a point on your service, you stay put. In pickleball, you get a second chance if your side is serving and the first server on your team messes up so that adds to the confusion as well. Got that? Sparky doesn't--- yet. With Sparky's short term memory troubles, she kept forgetting the score constantly, but everybody was good natured about it. Sparky said there was a reason she was a special ed teacher for 34 years!

Did we say Eldo is competitive? Yep, we did. Did we say this is a game where you are less likely to injure yourself? We did, UNLESS you are Eldy..He's a weekend warrior....He lunged for a ball a little too far in front of him and took a nosedive to the floor. He literally skidded/slid to a stop in front of the instructor.  There was a collective GASP! from the crowd. It was a pretty spectacular slide! The only evidence was the skid marks left behind and a little bit of a pulled muscle behind the knee. Duly noted skid marks: 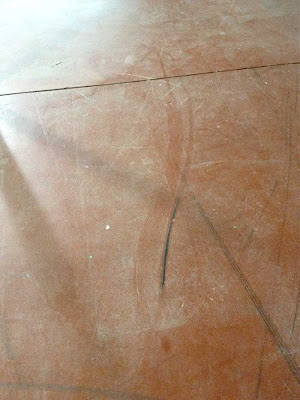 And duly noted is Nurse Sparky's orders to ice the knee.....Poor Eldo! Can't be a weekend warrior without some practice and warm up first! 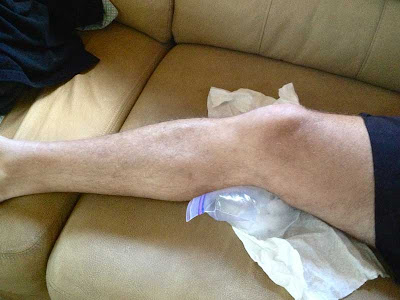 But he's ok...just a little swelling...He says it doesn't hurt. Wait till he gets up tomorrow, there are going to be a LOT of places where he's hurting! Nurse Sparky is gonna be pulling AM duty and barking orders. "Ice that knee." "Get yourself down to the hot tub."  And the biggest one..."Quit complaining! You're gonna be ok."  :-)  Just kidding, Eldo is not a complainer. Right, buddy?  Hopefully, there will be more games to come. Eldo really enjoyed himself today despite the fall...Sparky did, too!

Lots of stuff going on in the next few days...There is so much going on, that we will be having trouble deciding which event to check out! Tomorrow, it's a flea market and possibly a museum of art and whimsey. Sparky needs to get back in the pool and try out her new barbells.  So many activities, so little time!
Posted by Jeannie and Eldy at 11:32 PM