Sparky's Under the Weather

Well, it was going to happen sooner or later...Sparky got sick. She hasn't been sick in two and a half years that she can remember. She caught a cold from SOMEBODY and it's a doozy....So not much of a blog today while she tries to doctor herself up with cold/sinus medicine. Eldy is close behind with a little cough of his own, but hopefully he won't get as bad as Sparky. Eldo likes Alka Seltzer Plus for colds, but Sparky is stubborn about taking medicine and hates that stuff, so she's not going to take that....She'll take something else. Sinuses hurt, knees hurt, feet hurt, everything hurts. Sparky feels like she has been run over by a truck. WA--A-A-N-N-H! (That's Sparky whining, explains E.)
So, it's back to bed she goes for awhile, and we'll check back in on her later today..... 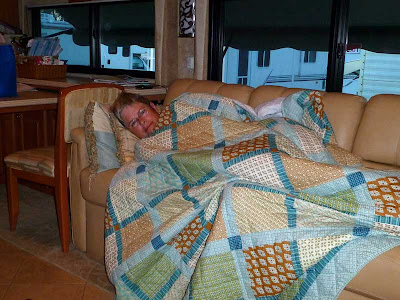 OK, it's later...She's BA-A-A-C-K! She decided to get up and go to swim exercise class, maybe that would make her feel better...It did a little bit, so then Sparky decided to head over to the rock shop for a bit, to polish some more stones...Sparky's on a roll now, she might have a cold, but she isn't going to let it keep her down!

At 1:00 this afternoon, Sparky and Eldo went over to the new bocce courts to see what that is all about. Sun 'n' Fun has instituted brand new bocce courts and had some reps from other resorts come over to explain the game today. The courts look really nice, but it's not a sport that interests us at this point. The interest is certainly there because the parking lot was completely full of bikes and golf carts. This cart is getting ready for the parade in a day or two. 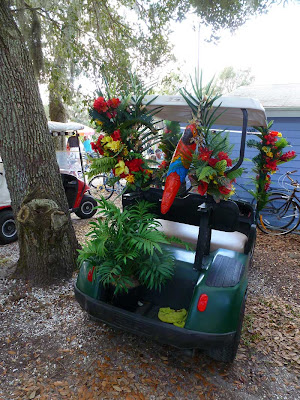 It was a quiet rest of the day....We had originally planned to go to Ocean Blues this evening, a great bar/entertainment venue in downtown Sarasota, to hear a great rock and roll guitarist who came to the U.S. from Lithuania last year. We saw him last year when we were here. His name is David Smash and he's terrific! But we were both feeling so punk that we ended up staying home. We'll catch him another day....

Instead we went down to poolside, it was "Martini Night" and listened to the impressionist singer  Sun 'n' Fun hired, Marke Bush. The martinis were great, the impressionist, not so much. He got off to a rough start, there was a time mixup. The crowd got there at 7:00, he wasn't ready to start till 7:30. Sun 'n' Fun people LOVE to dance, and get out on the dance floor any time there is music. Several times people got up and started dancing in front of him. He repeatedly asked them to move to the side so people could see him do his thing. Then, during a Stevie Wonder singing impression, some lady sauntered to the front of the stand where he was singing and started suggestively dancing in front of him. She was sort of joking around, but he got mad, shut off the music and repeated that if people wanted to dance, they needed to go off to the side. We felt that an impressionist show was not the place to get up and dance and that offended him, rightfully so. You can't do your best impersonation with some woman jiggling her boobs in front of you, that's for sure! Things just didn't seem to be going well with the show and as it continued,  he was having trouble getting the audience participation he needed. He was very frustrated and it showed. We didn't stay much longer after that.