Python Challenge 2013 and Other Fun Stuff

Record highs continue for the Sarasota area.....Even though it's too hot for Sparky, it's been pretty pleasant with a nice breeze almost every day. In her younger days, Sparky would have been to the beach every day, soaking up the sun. But not any more, Sparky has to worry about skin cancer after years and years of baking and frying in the sun. So we don't go to the beach hardly at all. Eldo is not a sun worshipper either, so we are in agreement on that one. Don't get us wrong, we both love the beach and the ocean. We just don't want to sit in the sun all day! But we're thinking about having a "beach afternoon" with our Sunbrella sunshade. 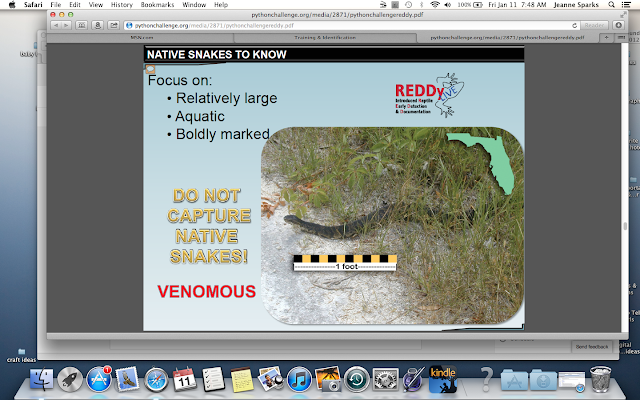 We heard on the news this morning about the python hunting challenge. They even have a website for it! Python Challenge 2013. It's a very interesting website. Everything you ever wanted to know about Burmese pythons--how to recognize them, how to humanely kill one, (a shot to the brain which is pretty tiny), stuff like that. If you've been reading the news, Burmese pythons have established themselves in southern Florida and are causing havoc with the eco system. They are eating bobcats and opossums among other animals, and have no known predators in Florida, so they are flourishing. The idea of the contest was to lower the numbers of pythons through a month long hunting contest. You want in? All you have to do is pay 25.00 and take an online training course which consists of mostly looking at photographs of pythons and native protected Florida snakes to learn the differences between them. So far, 500 people have signed up for the hunt, and more are coming....

The month long contest is attracting hunters from 32 states and there is a prize of $1500.00 for the most collected pythons, and $1,000.00 for the longest one. The largest python captured last year was 17 feet, 7 inches, and weighed 165 pounds! Now there's a way to earn some extra money while traveling! But not for Sparky and Eldo.  Nothing like bringing amateurs with machetes, clubs and guns to an environment such as the Everglades, where some of them will be hunting. Bet a lot of these hunters will find out pretty quickly this is no glamorous hunt...It's HOT down there and the mosquitoes will eat them alive if they don't get lost first! But guess the contest sponsors are going to provide GPS training and additional snake I.D. training once they get here. We bet a lot of the snake hunters end up going home quickly!

We went hunting for a different species today...the elusive BARGAIN at the Red Barn Flea Market in Bradenton. The entire market/plaza is open for four days a week through April. The days of operation for the entire market during the winter season are Wed., Fri., Sat./Sun. from 8:00 AM to 4:00 PM.  They don't say how many vendors they have, but it's pretty big...We think the flea market at Webster, FL is a lot bigger. What's nice about the Red Barn, is they have an air conditioned building that houses the bulk of the flea market. They also have a really nice produce section. We thought the produce was much nicer than Webster. But overall, we were very disappointed. 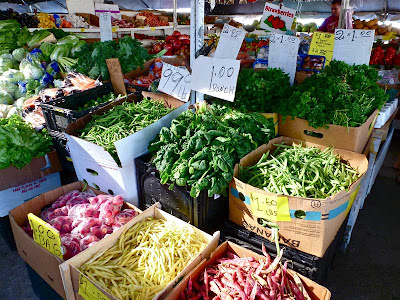 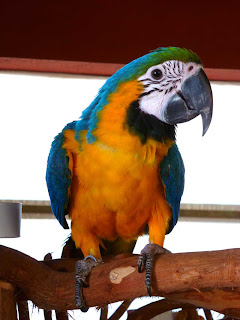 The market looked very dated and had a very old tired worn out appeal as far as the merchandise. The same old cheap stuff from China dominated...purses, jewelry, tools, clothing, sports stuff and memorabilia. Sparky stopped at one booth where the owner imports dresses from Hawaii, and they were very pretty. The handcrafted paper beads necklace and earrings caught her eye.  Food kiosks and snack booths seemed to be almost as prevalent as the merchandise. You can find a wide variety of "stuff" such as birds and bird supplies, (think macaw and parakeet stuff), golf and lots of miscellaneous junk.


They say one man's trash is another man's treasure, but this person's site left us wondering if they sell anything, it was so messy and dirty! 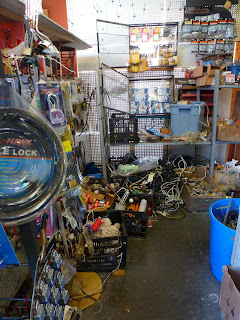 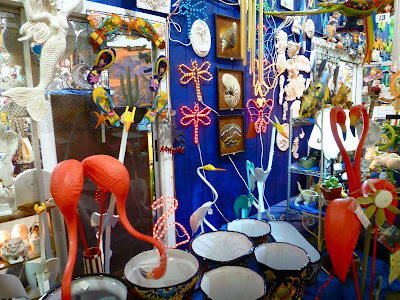 everything from air brushing tee shirts to wigs and wood creations. In there somewhere were some handcrafted, made in America things, but they sure were hard to find!  Sparky's favorite store was the seashell store with some cool things she had not seen before...like the "sea cookies"....They look more like sea "buttons" to her. 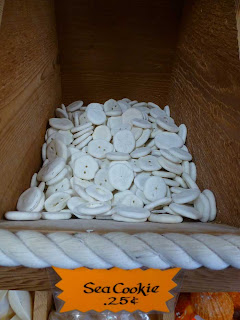 Sparky loved the sand dollars and loves the symbolism and stories people share about them...(It's religious in nature. In case you are interested, here is one link that tells about that. Symbolism of sand dollar) 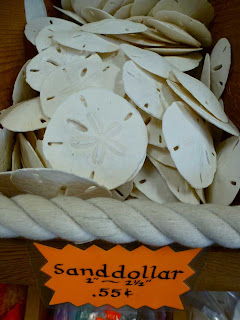 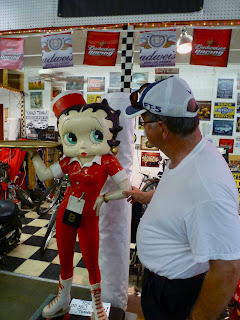 Even with Betty Boop there, it just didn't have the same fun, bargaining atmosphere as the Webster Flea Market, in our humble opinion. We probably won't head back to Red Barn any time soon, unless we think of something we need like "fit-over" sunglasses. They had those, too. Sparky did pick up a few polished stones for wrapping for jewelry pendants, (1.00 each) a pair of hemostats for jewelry making (2.00), a mirror for the baby busy board (1.00) and that was it.

Sparky is still under the weather with a bad cold and cough so that's all we managed to do today.....She's wishing she had gotten a flu shot earlier this fall. Guess the flu is really picking up in the Tampa area....and many other places as well. But best to wait out the remainder of the season, it's about half over, and for sure get one next fall.