Time to Shake Your Booty and Get in Shape!

Sparky is talking to herself, don't cha know?! We went to the Sun 'n' Fun Lifestyles Open House today at the park. They had just about all the activities offered at Sun 'n' Fun demonstrated at information tables. There was everything from a mountain dulcimer group that you could join.... 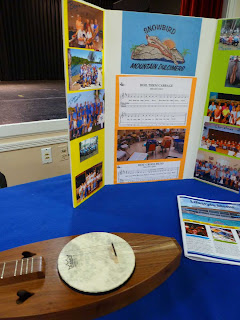 to all kinds of card games, photography classes, acting/singing, school volunteering, scrapbooking, woodworking, jewelry making, cruises, softball, volleyball, ping pong, lawn bowling, bocce ball, golf, cycling road trips (with a restaurant break in between!), Zumba,  to a gal teaching hula hooping....She makes her own hula hoops from irrigation tubing! Sparky remembers talking to a hoop dancer at the drum circles at Siesta Key who lost 70 pounds in two years just by hula hooping. Sparky signed up to take the class.  :-)  Sparky will have trouble keeping the hoop up, but Michelle, the instructor, talked her into what a fun class it was. Sure--everybody will be laughing at Sparky trying to remember how to hula hoop, but bets she won't be the only one having trouble and she will be laughing, too! 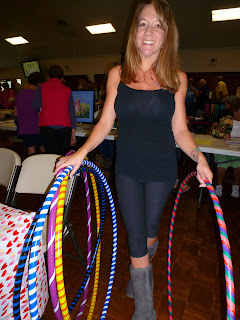 They have a new archery range at Sun 'n Fun and they provide all the equipment, you don't have to go out and buy anything--compound bows, too! Sparky's head was spinning from all the days/times/ and events offered. What to do when and where? What a dilemma! 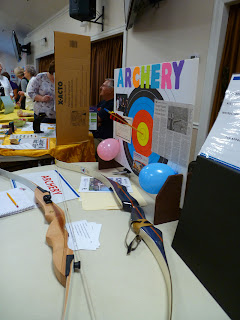 And there's pickle ball....Sparky and Eldo are going to refresh themselves with a beginner lesson and try to play again. We have the paddles and the balls, now let's get going, Eldo! Pickle ball is really fun! In case you haven't read about it, it's a cross between tennis, pingpong and badminton on a shortened up tennis court. You reach less, run less, but still get a great workout! 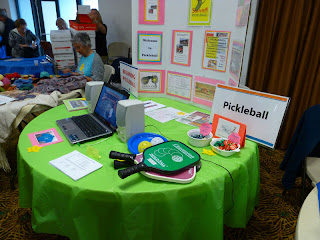 Sparky talked Eldo into getting a "body analysis" along with herself.  The park had a sophisticated body analysis machine--the InBody 230-- (an over $6,000 machine). Step right up, place your feet in the tootsie slots, hold the "handlebars" out to your side, and the machine gives you a complicated readout of everything you DIDN'T want to hear---Sparky will confess to a few numbers just because she will....If she says it publicly, maybe that will spur her to try harder at eating better and working to get more exercise. Nothing like a little full disclosure to embarrass oneself into taking action. HA! That has NEVER worked with Sparky so maybe we'll skip that....

But it was VERY interesting what we learned about our weight today. You get quite the readout from the machine. On the printout, it tells you among other things where and how your muscle mass is proportioned.  You get a percentage info of total body water, dry lean mass and body fat mass. Sparky has above average skeletal muscle mass, which is good. You lose bone mass as you age. Sparky is maintaining. All Sparky's biking and hiking have helped maintain the skeletal mass. Maintaining your muscle mass helps protect against fragility. BUT-----

Sparky has too much body fat mass, which is BAD. Sparky's BMI (body mass index) is 29.5. It could be lower. But if you have a lot of muscle, then a higher body mass index is not necessarily bad. Percentage of body fat--  36%. Yikes! Sparky needs to get down into the 28% and below range. Sparky needs to be eating way less! Sparky needs to be paying more attention to calories! Sparky needs to quit eating double stuff vanilla Oreos! Well, she has, but there are other things that need changing, (like a Coke a day habit? asks E.) Not ready to give that up, yet. Sparky is stubborn on that one, although a long time ago, she remembers losing 20 pounds in about six months simply by not drinking pop. BUT--the older Sparky gets, the more stubborn she gets about going ahead and eating what she wants to  and not letting it dictate her life. Sparky LOVES food and that's probably never going to change! (RATS! says Eldo), who could care less about where his next meal is coming from, which is probably a good thing since Sparky hates to cook!

Eldo is in the "over" average range on everything, too, except for skeletal muscle mass, we had very similar profiles...so we both need to work on ourselves. We'll try harder....little baby steps can make a big difference over time. We had stopped taking baby steps and slipped back into bad habits since we've been in Florida. Time to renew our efforts!

See you at the gym! (Maybe.....  :-)  OH--P.S. Does anybody know where Sparky could find a wheel like the gray one in the top right hand corner of this home made busy board for babies? Sparky is making one for her little grandson, and needs a wheel that turns with a handle. Thank you for any help on this! 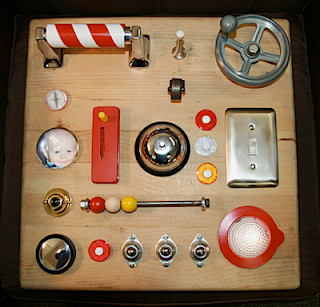