If you thought Eldy was cooking something up, you'd be WRONG! Sparky cooked up a trip to Myakka River State Park for us last night to see the Sauce Boss--Florida's one and only blues/slide guitar player and chef, Bill "Sauce Boss" Wharton. Bill plays the blues and cooks up gumbo at every show!  How fun is THAT? 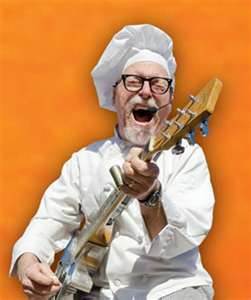 Tickets were 15.00 a person, and worth it!  There was a nice crowd in attendance, and many people have attended Myakka's events before and seen the "Sauce Boss".  Bill is a fun guy, and performs mostly his own songs, singing the blues in a gravelly voice, playing the slide guitar with all kinds of emotion that only a great blues player can do. He's a one man show complete with switching out of cool guitars, jokes, playing a washboard vest, providing his own drum beat and of course, cooking and serving the chicken gumbo! He mixes it and cooks it right on the stage. This concert was a benefit put on by the Friends of Myakka to help the park with their budget. 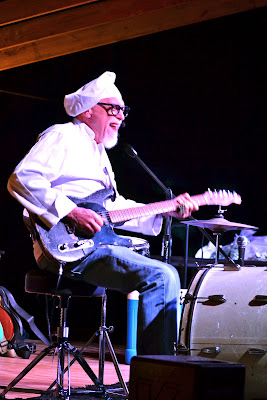 Sparky fixed a simple picnic supper. Apparently, gourmet suppers were more the norm for attendees who have been to Myakka's entertainment venues before. Chocolate covered strawberries, wine, cheese, chafing dishes, chili, hors d'ouvres, even buffet tables were in evidence! There were all kinds of cool picnics going on....and BIG FIRES...Evidence that the night was going to get a LOT cooler! 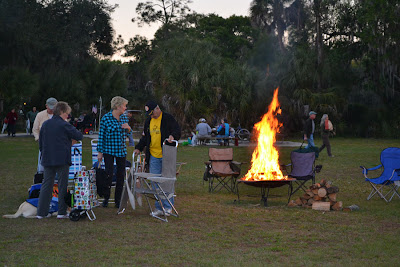 It did, and Sparky froze despite a flannel shirt, jeans, a fleece jacket and a little blanket!  However, we enjoyed the show this evening and look forward to seeing what other events will be at the park in the future.

Tomorrow, the pirates are taking over Tampa! But we've decided to pass on the Gasparilla Pirate Festival--too much traffic, too much congestion, and hours and hours of standing around waiting for something to happen, like the ship docking at 11:30 AM, and the parade at 2:30 PM. At 8:00 this morning, the lines for adults to get a pirate's face painted on them were at least 50 people long. It's gonna get CRAZY downtown! With all the heavy emphasis on drinking responsibly repeatedly shown on the local news channel, we have a feeling there is a LOT of drinking going on. One giant party! We decided to pass this year. Maybe next year, when we know more about how to get around Tampa.  See you later!
Posted by Jeannie and Eldy at 11:13 PM