The park is thinning out just a tiny bit, all the families with kids went home so the kids could get back to school. This week is Homecoming Week at Sun 'n' Fun, so now the REST of the seasonal residents are heading back into the park for the remainder of the winter season. Boy, do they have the activities for Homecoming Week! These are just a few of many more activities planned for everybody coming to Sun 'n' Fun this week and for the residents coming back "home".

College National Championship Football Game Tailgate Party--a pound of chicken wings for five bucks, Irish nachos, 5.00, one dollar hot dogs and the game on the BIG screen....Eldo might have to go check that out!

Blast from the Past--breakfast at Boondock's Restaurant on the premises--2 pancakes, eggs, sausage and coffee for $2.50!

Bocce Grand Opening--Sun 'n' Fun has put in new bocce courts and is promoting Court Bocce, which is another form of the sport. They are going to have Court Bocce reps from other resorts come and show people how to play. Eldo might go check that out....

Impressionist Marke Bush--he's quite the singer, too!

Tribute to Elvis--Dwight Icenhower--Don't you just love some of these performers' stage names? He's considered to be one of the best Elvis impersonators in the country.

Blast from the Past--$1.50 beer a couple of nights this week!

A parade with floats, a band called Tropical Ave Band--from Frank Sinatra to Black Eyed Peas is playing for a free dance. An RV show, more karaoke, and a Sun 'n' Fun talent show....It's quite the lineup this week!

Wanna know what chores RVers do? Well, Sparky has to wash the tile floors regularly, because we don't take our shoes off inside the door. We should, we track in enough dirt to make almost daily cleaning necessary! We cleaned the Fantastic Fans, those little ceiling box fans that really move a LARGE volume of air in a motorhome. They also suck a ton of dust and dirt through the screens. Sparky cleans her screens with a toothbrush, but really needs to use a larger brush for a more efficient cleaning procedure. Eldo did some laundry today....Sparky is mostly responsible for the inside, and Eldo for the outside, it just seems to work great that way. (Be sure you mention I do dishes when you cook, offers E.) Yep, and he doesn't have to do them all that often, because Sparky doesn't cook a lot, just some! :-)

Sparky worked on fixing some problems with the 2009 Honda leather interior, if it's really leather, we are not sure. We thought it was. This is what's happening to the leather/vinyl interior on the arm rests in the front seat. This is the passenger side where Sparky rests her arm occasionally, it's the arm rest on the door panel. 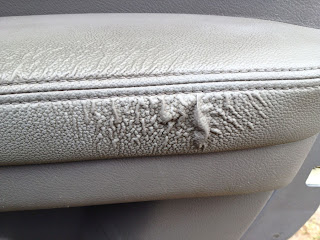 Here's the driver's side. It's a lot worse...Sparky glued down the loose edge today, not knowing how else to tackle this weird disintegration of the fabric. 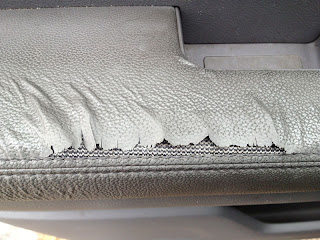 What's even weirder, here's the passenger seat where Sparky commonly rests her hand on the left side of the seat as she is sitting....It did the bubbling thing at first, then abraded itself down to a different texture. Sparky is wondering just how caustic the oils in her skin in her hands must be to cause this kind of chemical reaction or wear to the fabric! Either that, or it's just substandard vinyl instead of leather. Not much we can do, we should have put some kind of protectant on the fabric early on and maintained that protection regularly, but we didn't. We thought about seat covers a long time ago, but the seats have a heating element in them, and we didn't think we should cover the seats. 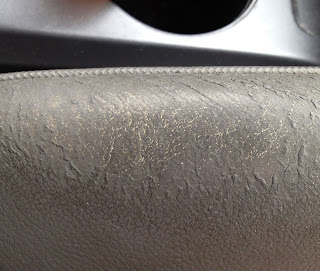 And, we battled the sugar ants, those teeny tiny little brownish reddish ants that show up in certain locales, like Florida. Sun 'n' Fun appears to recognize the problem as we saw signs in the cottage rentals  talking about not leaving ANYTHING out, and making sure containers were tightly closed. We're finding these little boogers swarming any time a CRUMB drops! Ugh! But at least they don't bite. We're spraying which seems to be helping...and using bleach. Bleach interrupts the communication of pheromone trails that lead more ants to the site of whatever they have discovered. ("yippeeeeeeee! a crumb! C'mon, fellas! Come and get it!")  Maybe we need RAID!

Grocery shopping rounded out the list of chores today...

And Sparky got started on a project for her little grandson, which is NOT a chore....Here's a clue.... 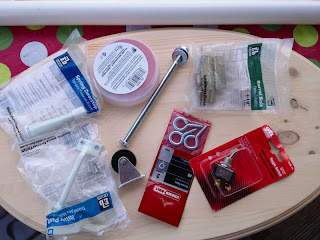 Stay tuned and in a couple of days, we will show you the final project.....  See ya later!
Posted by Jeannie and Eldy at 11:31 PM