The Latest News from Sunny Sarasota and Thereabouts

Are you heading to southwestern Florida? Watch out for Burmese pythons! The pythons that populate the area near the Everglades are getting so out of control that Florida is holding a python hunting contest this month. A grand prize of $1,500 goes to the person who kills the most pythons, and $1,000 goes to the person who gets the longest one. Hey, Eldo...here's a way to make some extra money so we can stay at Sun 'n' Fun longer!  (HA! That is the most harebrained scheme I have heard from Sparky yet! says E.)  OK, Sparky will keep looking for other ways to earn some extra money while traveling full time in the motorhome...She was just joking anyway...We both HATE snakes...You almost can't put a Burmese python in the same category as a snake you run across on a bike trail, can you?

The latest on vultures....They are attacking cars at Everglades National Park as well as here at Myakka State Park. The national park is distributing "vulture kits"-- bungee cords and tarps for people's cars to help protect them from damage. The vultures are stripping the rubber molding off windshield wipers, shredding sunroof seals and other vinyl/rubber/plastic parts. Scientists are not sure why their appetite is expanding to non-roadkill, but it is.....They seldom eat it, they just attack it! Here's an article about the vultures from the Miami Herald...

What other news do we have for you?  Not much...Sparky is back to exercising in the mornings at the swim class with the styrofoam bar bells for an hour. 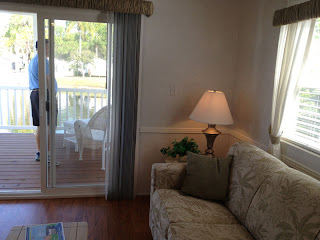 Around noon today, we went to an open house for a new 2012 Chariot park model---JUST FOR THE HECK OF IT! No, we are not settling down at Sun 'n' Fun and becoming residents.We just wanted to see what a new park model looks like and find out the costs of ownership in this park. The cost of the park model was 84,000 for a one bedroom, one bath, fully furnished model. Whewee! We found out some interesting things from the sales agent...Florida has a law that says park models can't be over 500 square feet. If it's 501 square feet of living space, now it's a mobile home and can't be in an RV park. There are no 14 foot wide, two bedroom park model at Sun 'n' Fun. Florida says that make it a mobile home and now you can't be in an RV park. You also can't live in your park model year round. Sarasota county law says you have to be out of it for three months to stay at Sun 'n' Fun. Sort of like the Canadians!

If you want two bedrooms, you have to get narrower and get a 12 foot wide park model. BUT, they put lanais (screened in porches) on the really nice ones so you get about another 400 square feet of living space attached to the house. Sparky would jump at the chance to have additional living space for the same price as buying a LOT in some nice RV park.
The ones we looked at today had really nice railed porches on the back side of the house. The houses are built to withstand category 3 hurricane winds, but they've never had a hurricane hit Sarasota, at least not since the '30's. Sparky knows better to say than never say never. 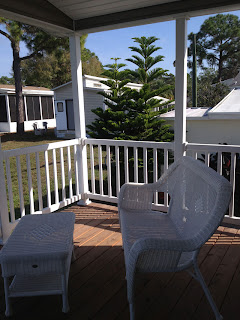 By the way, you don't own the land your park model is on, you lease the space under it. That's true for a LOT of snowbird parks in Florida. So there are fees every year to keep your park model on a piece of Sun 'n' Fun property. Sparky wouldn't want to live in Florida in the summer months anyway. She wants to be back up north!

Since we have a full house payment on the RV, we just did some wishful thinking. Down the road about ten years, we might be able to think about something like that. So for now, we're full time travelers...We are happy with that! It was just fun seeing how we might settle down some day to a summer location and a winter location. And besides, it took Eldy ten years of researching the RV lifestyle before he ever bought an RV, so we're in full time mode for the long haul. But Sparky is going to start buying lottery tickets, tee hee hee.....Or maybe we could look at some used ones...Hm-m-m-m...

Just kidding, Eldo, and readers! We're not coming off the road for a LONG time....At least not to get a house, we have one!  (She had me worried there for a minute! says E.)  We'll see you tomorrow....