(What a great job of alliteration in your title, Sparky! laughs E.) And if you remember alliteration from your school days, YOU WIN!  (a pat on the back! :-) Today was a little sad....Kelly was the first one to have to get back home and get to work...She left early in the morning...Sparky and Eldo were up bright and early to say goodbye......Kelly had a long drive ahead of her...Fifteen and a half hours back to Virginia....Bye-bye, sweetie....it was great having you here and you were absolutely wonderful with your little nephew....This was one of the few times he was tired and fussy. But he LOVED his auntie Kelly.
Here are a couple more with Sparky's little grandson and his Aunt Kelly.... 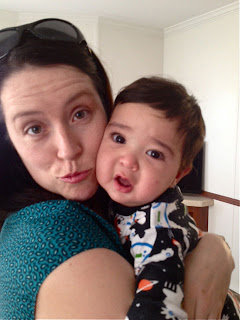 And one more....
We just discovered that on the last day that Eldy's kids and grandkids were here, that Sun 'n' Fun had been running a fun event every day in the afternoon at the indoor pool this week...there were water walking balls....Trevor really got the ball rolling, heh, heh, heh..... 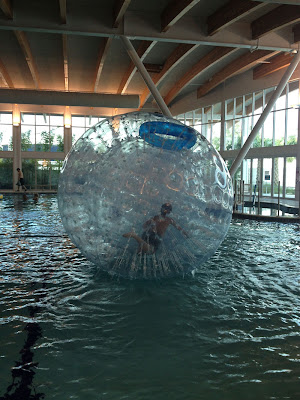 They also had inflatable "Skidoo" type wave runners for the kids to use, and something called the "Wibit"....It's an inflatable obstacle course. It was really cool! 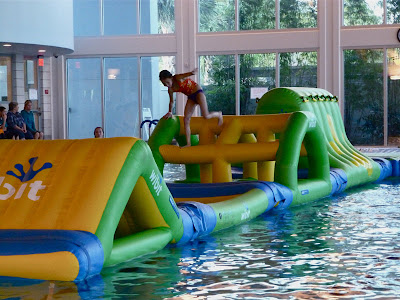 Trevor and Connor must have raced through the course about ten times each! Over and over and over they climbed, swam and ran...There are side ring walls you have to power your way across, a pool with narrow side rails to slide or walk across, a ladder to negotiate, a slide to climb up and slide down at the end....It was a blast watching them have a blast!
At the end of the day, we were worn out!  But wait----there's more--- a pajama party poolside in the evening...a d.j., a bed set up for photo ops....And yes, Sparky is wearing her p.j's in public! Eldo--(NO WAY!) Eldo doesn't own pajamas, heh, heh, heh....He sleeps in his underwear. (SPARKY!----T.M.I.! Too Much Information! exclaims Eldo.) 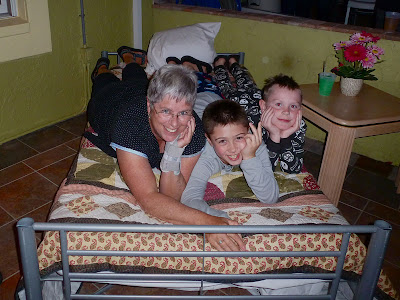 Kerry and son made it to the pajama party for a little while, but the sound was a little too loud for him...So they had to leave a little earlier...It was bedtime for little B. 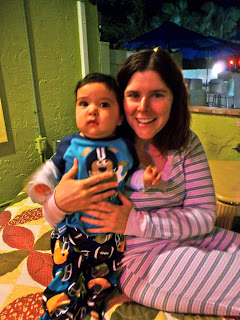 Eldo's daughter, Kristi, danced up a storm with Sparky...We got our groove on to LOTS of funky music geared towards a younger crowd because of all the teenagers in attendance this evening. Sparky is gonna have some sore knees tomorrow, but it was worth it!  Kristi had the smooth moves....(Just like her old man, says E., proudly.) Eldo and Eldy's son and daughter-in-law watched and tried to take photos, but they didn't turn out.....That's probably a good thing!

We had a terrific day today and this evening, but tomorrow, all the remaining family members have to head home...Sniff, sniff..... It's been a fantastic week!