Sparky's on the Mend!

Well, the weather has straightened itself out...From a very cold front that blew in, one day, and quieter than what the weatherman said it would, we're back to normal temps in Sarasota for this time of year...seventies during the day, fifties at night...Weather is looking really great for the coming week...and Sparky is feelin' pretty good after a week and a half of nasty coughing, phlegm, and sinus troubles. So-o-o-o-o....She went on the Rusty Spokes Bike Club group's Longboat Key bike ride today...The weather started out with sunny and a dusting of clouds...high sixties, gentle breeze, perfect day for a ride.... 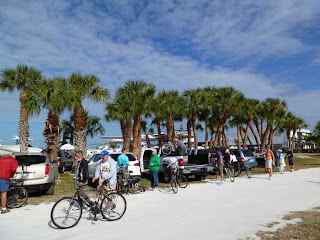 Thirty-four riders headed out from the Sun 'n' Fun parking lot and drove over the the Mote Aquarium, our starting point for today. Then we headed out over the bridge to Longboat Key. Sparky met a gal named Joanie from Grand Haven, MI and Joanie had a great pace going, about 12 m.p.h. That's about Sparky's speed, so Sparky drafted her most of the way there and back, of course, chatting all the while. Nice to meet you, Joanie! Hope we run into you again at Sun 'n' Fun!

Nice views along the way...Nice wide sidewalk for cyclists, or choose the roadside bike trail. 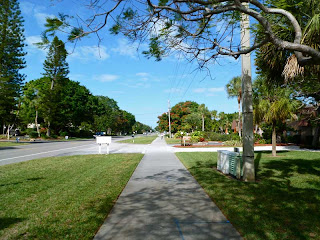 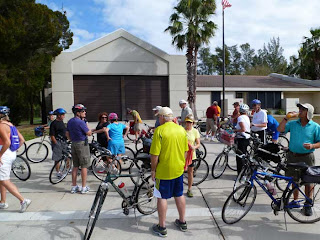 And the other, stopping along the way at one of the local beaches for a break.... 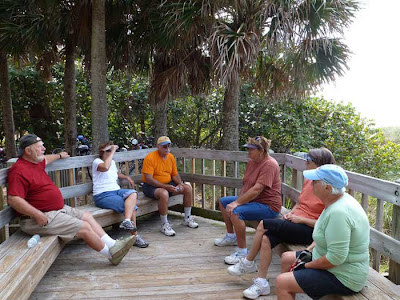 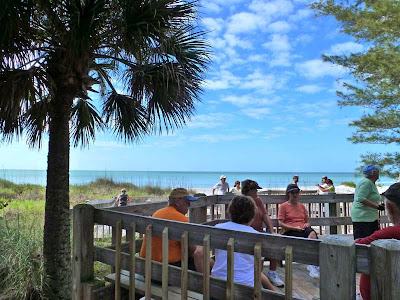 Who is that woman with the Fit Over Foster sunglasses?  :-) 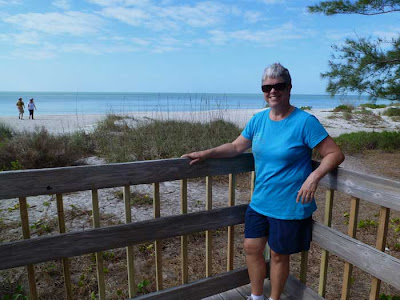 Then, time for lunch midway through the ride! Sparky LOVES this group! Almost every planned bike ride with the Rusty Spokes biking group has a planned food/restaurant stop. Today, the stop was the Lazy Lobster Restaurant in Longboat Key. WOW!  What a place! Great atmosphere! We ate out on the patio....a really cute part of the restaurant, with lots of colorful umbrellas....Joanie sat with Sparky and another couple from Pennsylvania that had just started traveling and Sun 'n' Fun was their very first campground stop. It's downhill all the way from here, guys! :-)  Just kidding, there are many, many wonderful places to stay besides Sun 'n' Fun. They are on a journey to explore our beautiful country after they leave Florida. Sparky apologizes for not remembering their names....We had a great talk about camping memberships, where to find bargains. Sparky did a little tourism promoting for Sarasota. They hadn't heard about the drum circle at Siesta Key Beach, the Saturday morning Farmer's Market, etc. If you're reading guys, go see the Marie Selby Botanical Gardens while you are at it! 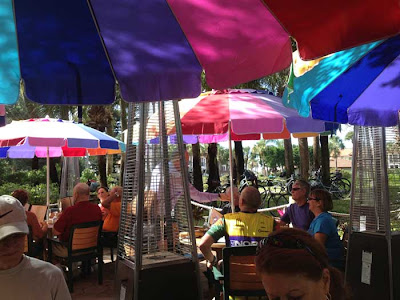 Was lunch ever good!! (Can you tell she liked it? laughs E.) Sparky had some kind of burger called the "Amelia"--ground kobe beef and tenderloin with a sweet tasting cremini mushroom sauce, potatoes au gratin that were out of this world, and really, really fresh green beans. 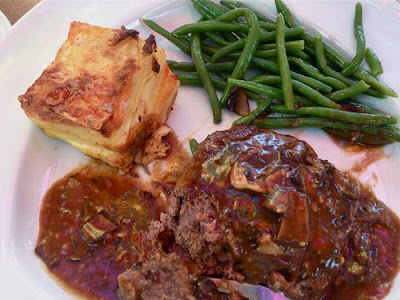 Everyone's food at Sparky's table was excellent, and everybody was talking about how much they would like to come back to the restaurant for dinner and try it again. There's a second Lazy Lobster Restaurant in Sarasota as well, in the Lakewood Ranch area.

After lunch, we were all ready for a nap, but it was back on the road again, retracing our steps back to Mote Aquarium, adding another 7.5 miles back, for a total of 15 miles today.....Sparky's knees are complaining a little bit, but it felt GOOD to get back on the bike for a nice long ride today....In two weeks, the biking group hits the road again for the Legacy Trail that runs from Sarasota to Venice and they are planning another great restaurant stop along the way. Sparky is IN! Hm-m-m-m-m...that puts us into Sun 'n' Fun into February. Looks like we are just going to have to stay another month, Eldo! We've got some RIDIN' to do! And some tread millin', some hot tubbin' and some ZUMBA, and........He gets the picture. He's on board with staying another month......YIPPEE-E-E-E-E!