Sparky Does the Hula Hoop

Remember when we said Sparky signed up for Hula Hoop class? Well, today was the day, and it didn't happen. Although Sparky has some pretty smooth dance moves on the dance floor and she can shake her booty with the best of anybody, she was not able to capture the proper hip and body wiggle to keep that hoop going. Nope! Zero! Nada! She tried and tried but to no avail. The class was FULL of hoopers, Sparky bets there were at least 20 hip grandma types in there, trying to loop the hoop. Granted, she was not the only one having trouble, but after 15 minutes of working up a sweat picking the hoop off the floor and trying again and again, Sparky gave up. It was too crowded and the constant clatter of Sparky's hoop crashing to the floor was just a bit too much. And after 15 minutes, only a couple hoops were crashing besides Sparky's....It was embarrassing! On to other things....

But that's ok, Sparky has lots of other things left to try here at Sun 'n' Fun...Zumba (one of the few classes that charge a fee--6.00 a class), tai chi, circuit spar class and the cycle spin class she CAN do....And there's the water aerobics class Sparky has been doing at least a couple times a week. This week, it's beginner pickleball lessons, a refresher course for Sparky and Eldo. We have met a nice couple, Gary and Edie, who enjoy pickleball, too, and we'll be playing for fun and exercise with them soon.

We did a little browsing at the University Center mall area today to pass a little time this afternoon...Sparky tried to get Eldo to buy this lime green outfit, but he wasn't having any of it. I told him the best golfers, like Ricky Fowler, wear bright colors to bring them luck. He wasn't buying that OR the outfit! 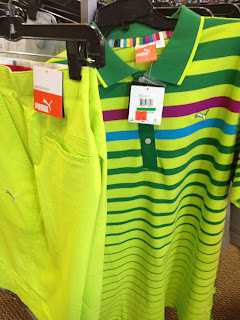 Sports Authority had some WILD colors for golf for guys that's for sure!

Sparky picked up a styrofoam bar bells and swim belt kit by Speedo for her water aerobics class for about 41.00 at Sports Authority. YOU can look like THIS if you use these things religiously!  HA! Maybe 45 years ago when Sparky was in college.... 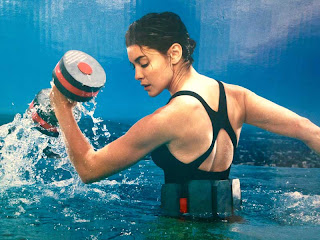 But Sparky will settle for slightly more definition in the arms and legs by using these.....

As the day progressed, Sparky started feeling miserable again...Time to come home and take a little siesta in the lounge chair in the 87 degree heat but in the shade. A new record for Sarasota today...Ugh! says Sparky, but it will cool down a little in the next few days...Whew! Sparky thought she was going to have to try and convince Eldo we needed to pack up at the end of the month and head NORTH. (THAT ain't gonna happen! exclaims E.)