A friend of Eldy's sent him this cute story...one that anybody who RV's and/or has spent time in an RV park model/RV community can relate to....Thanks, Mike!

"RETARDED" GRANDPARENTS
Written by a third-grader , on what his grandparents do.

After Christmas, a teacher asked her young pupils how they spent their holiday away from school. One child wrote the following:

We always used to spend the holidays with Grandma and Grandpa. They used to live in a big brick house, but Grandpa got retarded and they moved to Florida . Now they live in a tin box that has wheels, but its strapped to the ground. They ride around on their bicycles , and wear name tags because they don't know who they are anymore.
They go to a building called a wreck center, but they must have got it fixed because it is all okay now, they do exercises there , but they don't do them very well. There is a swimming pool too, but they all just jump up and down in it with hats on. (In Sparky's swim exercise class, everybody wears hats and sunglasses!)  At their gate, there is a doll house with a little old man sitting in it. He watches all day so nobody can escape.
Sometimes they sneak out, and go cruising in their golf carts. Nobody there cooks, they just eat out. And, they eat the same thing every night - early birds. Some of the people can't get out past the man in the doll house. The ones who do get out, bring food back to the wrecked center for pot luck. My Grandma says that Grandpa worked all his life to earn his retardment and says I should work hard so I can be retarded someday, too. When I earn my retardment, I want to be the man in the doll house. Then I will let people out, so they can visit their grandchildren

*************************************************
Sun 'n' Fun residents love to have "state" functions....A group will organize something for any and all residents from a certain state. We've seen pizza parties for New York, pot lucks for Illinois, and today, there was a buffet luncheon for Hoosiers! Good ole Indiana residents got together at the Boondocks Restaurant, the on site restaurant at Sun 'n' Fun. There were about 70 in attendance...a great turnout! A little trash talk on I.U. vs. Purdue erupted momentarily, but everyone behaved themselves and took to ribbing each other a bit more before settling down to lunch. Sparky and Eldo won a checkered flag fleece lap robe as a door prize...That will come in handy in the next day or two as temperatures plummet to the sixties for a day time high, but only for a day. 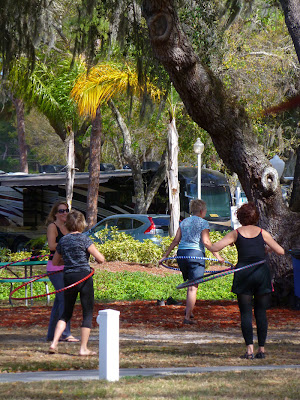 Sun 'n' Fun residents love to have fun. The hula hoop class that Sparky so miserably failed was held outside today in the 80 degree temperatures. Sparky is not so sure she'd be as courageous as these gals were to go outside where everyone could see how well they were doing with their hoops--or NOT!

And that's it for today....We didn't do anything else but take it easy, do laundry and Sparky crafted the rest of the day.....We've got some things coming up, so stay tuned!
Posted by Jeannie and Eldy at 11:55 PM