Why are There so Many Sharks' Teeth on Venice Beach? 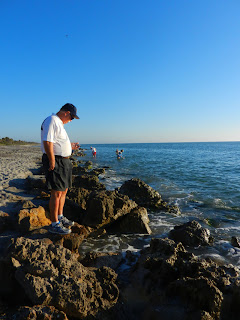 The coast of Florida, particularly around Venice Beach, is known as the "Sharks' Teeth Capital of the World". Why? Because it's the best place to find them, that's why! Sharks used to be much more prevalent in the Gulf of Mexico and so this area is rich with fossilized shark teeth. They wash up in droves--SOMETIMES-- onto the local beaches in Venice after high tide or a storm-- IF you are lucky enough to be there. Most times, you'll need to scour the shallow trenches of rock shelves with your hands or a special little net to "pan" for shark teeth, almost like panning for gold. The prices for shark teeth in shell shops are not cheap, so finding them yourself is a whole lot more rewarding and FREE! Sharks' teeth keep showing up in this area because there are so many varieties of sharks, they have several parallel rows of teeth, they continually fall out and are replaced in as short a time as a week, and in a lifetime, sharks can have had as many as 25,000 teeth! The way the ocean currents run seems to favor the shark teeth getting dropped off with the tide changes and thus being discovered here. Even with the tourists coming year after year after year to scour the beach looking for sharks' teeth, the teeth continue to be found.

We headed to Venice Beach today to look for ourselves...We saw a couple dozen people late in the day today, "panning" for shark teeth...They had special little nets that they were using. Sparky stopped to talk to one of the people, a lady, looking for shells and teeth. She was a very nice lady from Michigan, of all places. She was so helpful on telling us where there were good places to look at the beach. Venice Beach is so popular for shark tooth hunting due to name dropping in the local tourist literature, that it is hard to find any a lot of the time. But she was kind enough to give Sparky a tooth! Sparky thought they would be white, and the newer ones are. Most of the time, the fossilized ones are very dark, and range in shades from brown, gray, and blue to black she said. They look like mini boomerangs. 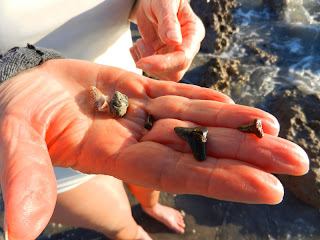 Apparently, scuba divers can find bigger teeth diving in about 15-20 feet of water off Venice Beach and supply the local shell and tourist shops with ample sharks' teeth. Just off shore, in about 20 feet of water on underwater sea ledges at Casperson's Beach, just down the road, is another place to find sharks' teeth on a regular basis.

Sparky mentioned how much she liked dolphins, and were there any to be seen along the beach? Oh, yes, she said. She proceeded to tell a great story about two years ago, when she was visiting Venice Beach. She saw a dolphin swimming a ways out in the water. She waded out a little bit to get a little closer to see it. It came swimming right up to her and pushed a fish at her! She was so shocked and it happened so fast, that before she could grab a camera or try to maybe throw the fish back at the dolphin, it swam back out to sea. She said the dolphin came in so close to shore that it had to really work at swimming out of the shallow water to get back to the deep. Wow! Is that ever cool?!
Venice Beach is a very cool beach with a rocky shoreline.....Lots of interesting shells to see, lots of shore birds....The shorebirds sure are posers! Pelicans LOVE to fish off the jetty. 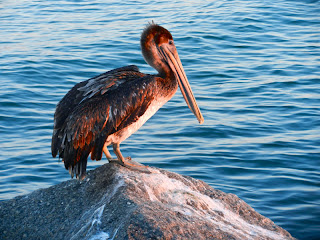 We enjoyed seeing all the different kinds of birds, even if we didn't know some of their names...They acted like they were very used to people and that perhaps they were fed on a regular basis. The egrets were fun to watch, wading and making their way around the rocks on the shoreline. 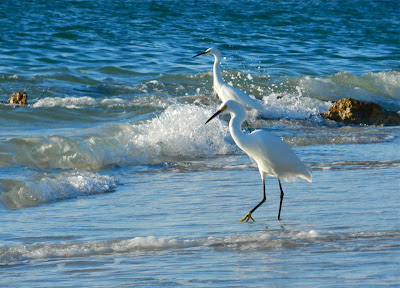 We do know this one is a Great Blue Heron. 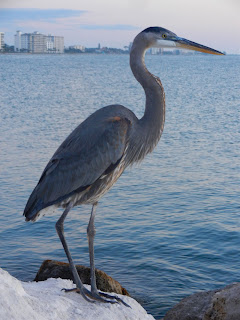 We watched the sunset from "the Jetty". It's a popular place for tourists to see it, but the fishermen weren't about to move to let you get a nice photo of the sunset. So there were many other great vantages points besides the Jetty--from the beach, the Humphries Park at the Jetty, and across the channel. 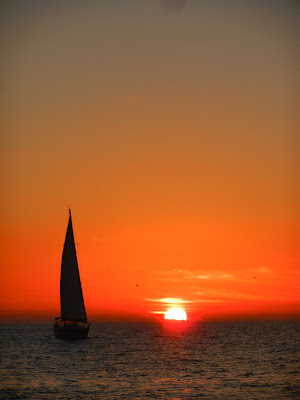 We saw a fisherman catch THE ugliest fish we had ever seen! He called it an oyster fish....There are better photos on the internet, but this one was at least colorful! 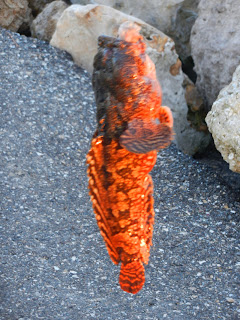 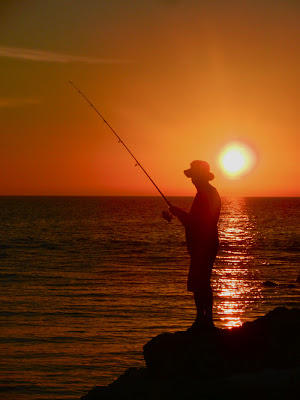