Back to Caspersen Beach in Venice, Fl to try and find some sharks teeth.  We visited Venice Beach first and found it to be so plain and ordinary, that we went back to Caspersen, the southernmost beach of Venice. It has a LOT more birds and shells to look at. Sparky found neat rock outcroppings where teeth might be found, and with the waves rolling in, she should have gotten lucky,  but not today..... 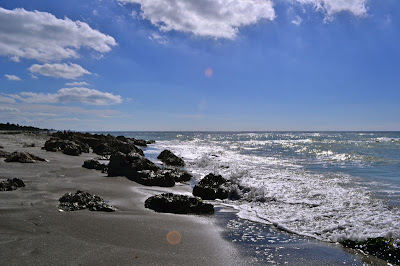 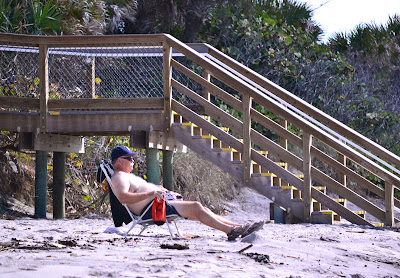 Sparky did some photo snapping of birds.....These little guys were all over the rocks at the beach and in the seaweed hunting for insects. 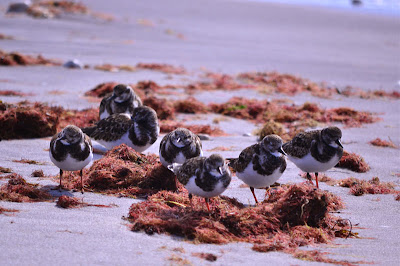 We noticed we started coughing when we got to the beach. Apparently, the red tide/red algae was affecting us. All the seaweed at the beach was reddish in color, suggesting red tide in ample evidence. Other people were coughing around us. Red tide can affect humans by causing respiratory distress if you are sensitive to it. We were on a dolphin watching trip one time last year and were coughing occasionally on the boat. Red tide was a problem in the area we were in on the boat tour and here it was, bothering us again. We didn't stay too long today at the beach because of that and worry about getting sunburned. We didn't bring down the Sunbrella shade tent today.

Sparky saw some cool conglomerate rocks cemented together with seashells.... 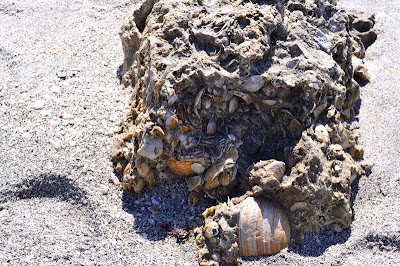 We went off to see Venice's pier as we headed back towards downtown Venice. You have to go through Sharkey's on the Pier, a local restaurant, to get out to the pier. They are hoping you will stop and eat first, a pretty good strategy that probably works 80% of the time. It looked like a fun place with a great view of the Gulf.  Prices were kind of high, so we didn't stop to eat, but instead enjoyed the sights on the pier, like this egret waiting for fish tidbits. 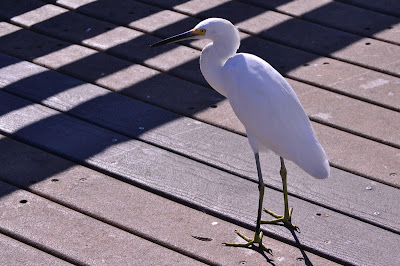 The pelicans were busy flying out in the gulf today...But there were plenty of shorebirds to see up close. Can you see the expression on the little bird's face? (Maybe he's annoyed because Sparky is taking his picture! suggests E.)
I think this is a royal tern? He certainly looks regal.....Or kinda like a Groucho Marx bird! 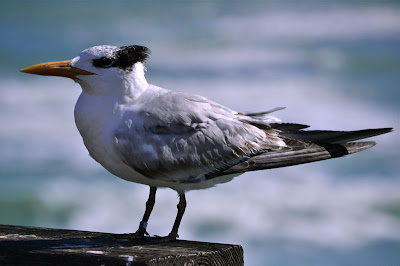 After the pier, we headed to downtown Venice, where there were lots of cutesy shops and boutiques, and lots of dolphin and turtle sculptures. 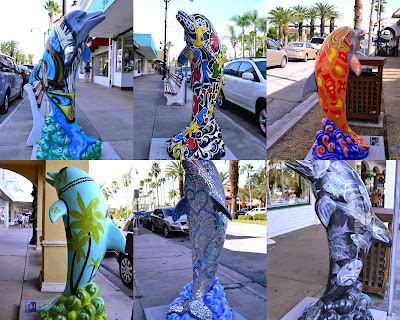 There were more than these pictured and they seem to be centrally located in town. Sparky just caught a few of them today..... 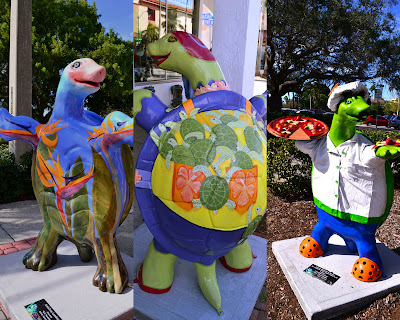 We enjoyed our little trip to Caspersen Beach and Venice today....If you don't mind a dark, sandy beach,  Caspersen Beach is a great place to bird watch and search for shells and sharks' teeth. If you don't find any, just head to Sea Treasures and Pleasures on downtown quaint Venice Ave. for LOTS of sharks teeth. You can get a whole bag, about 20 of them for 3.00. Sparky thinks that will be on her list next visit to Venice.