We drove over to Myakka State Park on the Myakka River and lake basin today. It's made up of the river and two shallow lakes. It's just a few miles down the road from our park on I-75. It's one of Florida's oldest state parks. WOW! What a park! We headed down the seven mile scenic drive through the middle of the park and saw all kinds of stuff. Wanna see an alligator? We saw this big boy sunning himself just below the bridge. 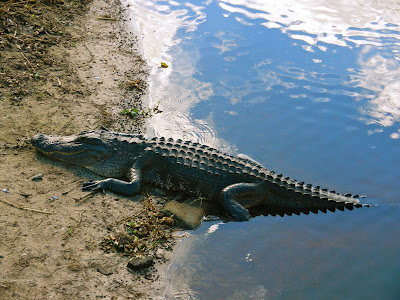 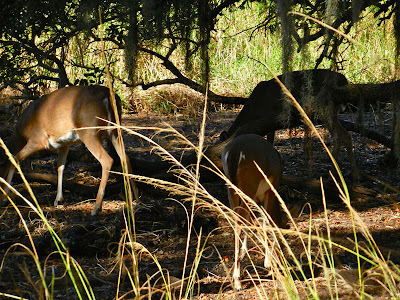 Check!  Want to see some wild turkeys? Right on the scenic drive once again.... 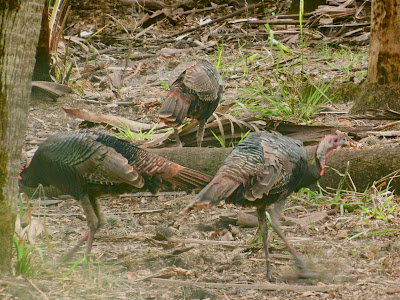 Want to see some cool roseate spoonbills? Sparky's favorite birds...Stop at the Birdwalk, a boardwalk that is prime area for seeing all kinds of birds. We saw a whole flock of spoonbills there, kinda far away, but Sparky caught them with her puny little zoom point and shoot camera. Check! 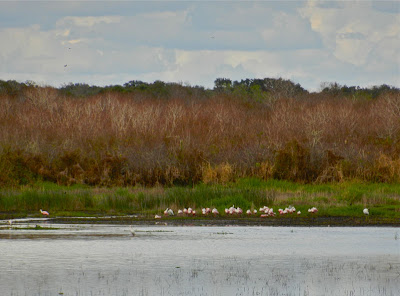 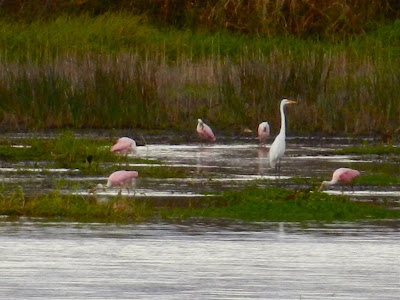 The Myakka River flows through 58 miles of wetlands, prairies, hammocks and pinelands. No wonder we saw so much wildlife! Eldy saw a SNAKE--some kind of BIG, dark blue snake as we were walking back from the bird boardwalk, but it wasn't an indigo snake. All he knows is, it moved FAST away from him and he moved FAST away from it! Wanna see a snake? Forget the photo! Check!

Wanna see some vultures? No, you don't! They are a really big problem here.... 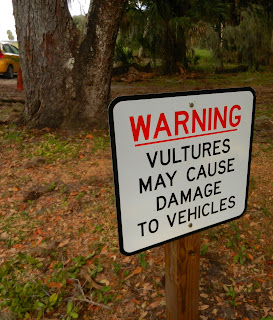 They flock together at the beginning of the day and at the end of the day. We saw a huge flock of them in a field as we were driving through the area near the tram and airboat concession stand. They like to eat the rubber and vinyl on cars and trucks, particularly the vehicles parked near the lakeshore at the end of the parking lot. Rangers fire air cannons in mornings and evenings to try and disperse the birds. They recommend you sprinkle black pepper on your car windshield, tie trash bags on antennas so they wave in the breeze, or don't park your car there at those times!

Want to climb the 74 foot Canopy/Walkway tower and bridge? It's a walkway through the treetops! VERY, VERY cool! This is an 85 foot long walkway bridge suspended 25 feet above the ground and extends 100 feet through the treetops of an oak/palm hammock to the tower. 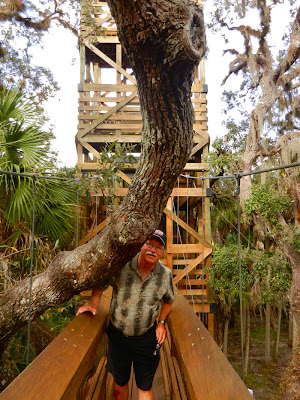 There's a whole other world out there in the canopy treetops and a terrific opportunity for nature study. over 20 canopy walkways have been built worldwide. How cool is it that Florida has one? It's like an outdoor laboratory! 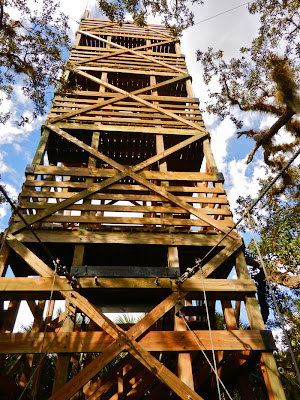 There are quite a few canopy/walkways in the U.S. and Canada. We're going to have to check some of these out! 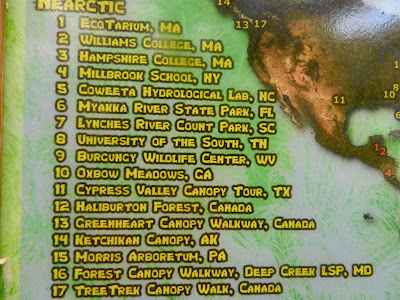 There are informational signs along the walkway and tower, telling you all about the canopy habitat. And when you get to the top, WOW! 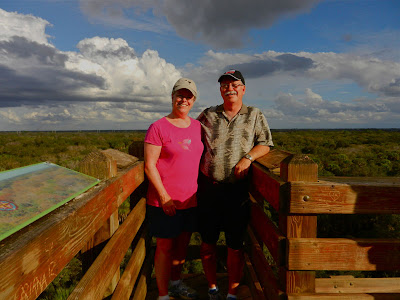 There's not a lot of room at the top for very many people. You'd have to wait for your turn to get to the top on a busier day....The stairs are very narrow and so it the space at the top. It literally gives a new meaning to the term "tree hugger"......We could have reached out and touched the tops of many of the palms and air plants growing on our way up and back down the stairs....Here, we are almost to the top. The tree canopy is BELOW us! 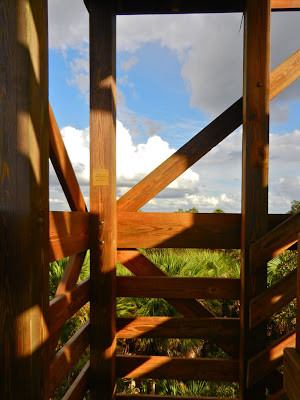 Looking down through the tower structure was pretty cool, too....It's a beautiful tower and very secure, even if it did move a little in the wind and with people climbing up and down. Yikes! 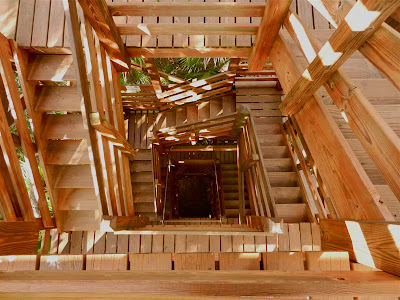 There was a little cloud hanging over our heads at the top, and it started to gently rain...And then..... 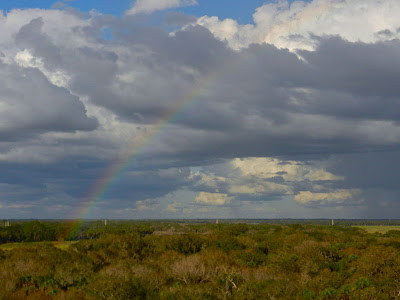