Eldo and Sparky are watching the weather very closely..The weather woes are everywhere ELSE but here in Sarasota..We're getting a cool down for a few days, but that's the worst of it....Sparky's daughter, Kelly, heads out Friday from Virginia for the long drive here.. She'll stop part way down as it's too far to drive in one day. Eldy's son heads out tomorrow from northern Indiana where the weather is looking MUCH more nasty. Eldy's daughter flies out Sunday from Indiana to Tampa, and we're hoping that the flight cancellations have smoothed themselves out by Sunday so there aren't any delays there. So we wait to hear the progress of the kids as they make their way south......

Today, Sparky polished rocks down at the rock shop and got a gift from the gentleman, Reg, who runs the rock shop on Thursdays. Sparky admired a navy blue rock and Reg said, "Oh, that's a sodalite....It polishes up really pretty. Here, you can have this piece." He gave me quite a generous sized stone to make into whatever Sparky wanted to!

Here is an example of sodalite polished and made into a pair of earrings.(photo is courtesy of the internet)..The stone is so beautiful and it's in Sparky's favorite color--blue. Sparky is probably going to do a wire wrapped pendant after the stone gets polished and buffed. 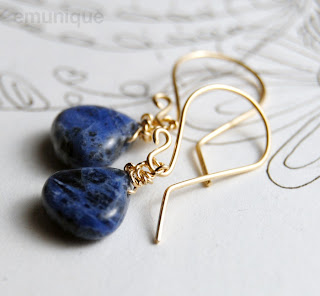 Sparky had her swim exercise class this morning, and then polished rocks for awhile down at the rock shop. While she was doing that, Eldo rode his bike for 30 minutes. Then Eldo took Sparky over to Maximus Park, that beautiful park in St. Pete's Beach where the cool disc golf course is, to get more long needles for her baskets. We didn't play disc golf today, we had some other errands to do.

So, we came home, headed over to bingo at Sun 'n' Fun Bar and Grill, and we WON!  A tin of cookies, no money...phooey! Boy, did they have huge jackpots...Two coverall bingo games of 150.00 and 206.00, and the average prize for a variety of winning cards was 40-50.00. Sparky got within TWO squares of covering the entire card on the 206 dollar jackpot. RATS! 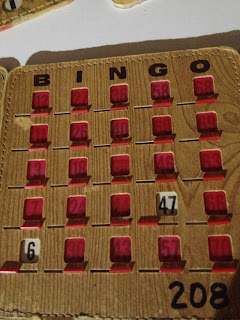 Because she didn't win, Sparky had to attack the tin of cookies to make herself feel better....They were half gone by the time the bingo ended. 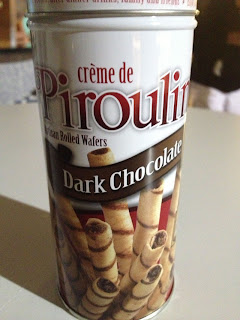 Eldo thinks he'll be back for bar bingo next week...heh, heh, heh.....It's cheap entertainment, four cards for 10.00 and the odds of winning are a lot better than playing the lottery, that's for sure!

Tomorrow Sparky thinks she is going to check out the Marie Selby Botanical Gardens..Maybe.....We'll see what's blooming this time of year in Sarasota....
Posted by Jeannie and Eldy at 11:19 PM