Sparky, the Wheelman or Driver's Ed 101

On the road again....Can't wait to get on the road again...So here we are...No weather report because we are travelin' down the road on I-110, to I-10, to I-75 South....Heading for Bushnell, FL today to spend the night in a Wally World, most likely. Tomorrow, Sarasota!

Sparky got to thinkin'....It's been a really really long time since she has driven the Tiffin. That is not good. With more practice comes more confidence..So it's TIME TO GET BACK BEHIND THE WHEEL. It's a little nerve wracking for Eldy. He's got to think of all the things he does when he gets behind the wheel, then transmit that information in language Sparky can understand. His idea of "push that lever" is not always Sparky's same perception. "What lever? You mean THIS one? Oh! You mean that one? Why didn't you say so?!"  (How in the heck she can not understand THAT direction is beyond me! says an exasperated E.) We won't get into gals and guys communication skills, that's asking for trouble!  :-) Heck, this is going to be a little nerve wracking for Sparky! Sparky doesn't even know how to get the wheel in the right position, and when Eldo says, "pull the lever back" it's -- -"WHAT LEVER!?" There are a ton of levers and push buttons all over the place...And the cruise control...You push the end of the lever button in on the drive shaft to slow down, and you SLIDE a lever ON the turn signal lever to the right to increase speed. It's a good thing they are on the same side of the steering wheel but you can't see the increase button 'cuz the steering wheel is in the way. Ar-r-r-g-g-g-h! So Sparky was having trouble finding the controls right off the bat.

Sparky had to get all that back in her head again, where the controls are, like where's the fuel gauge, what does this dial mean? What is that gauge for? And how to start a diesel pusher....OK, here we go...So, she put her foot on the brake pedal, pushed "D" for "drive", and DING! DING! DING! DING!  Ever notice when an alarm is dinging it seems to get louder the longer it dings? "What's wrong? Why is the rig dinging at me?" demanded Sparky. "Because you forgot to release the parking brake." DUH!  he wanted to say. But didn't. You know,  if you have been following the blog for awhile, that Eldo has the patience of Job, MOST of the time. He was very patient today with Sparky, so that was good. After she reacquainted herself with the controls, it was pedal to the metal! Not really..Sparky drives a conservative 57 m.p.h...The thing Sparky doesn't like about driving a 40 foot rig plus car in tow, is 1) encountering possible construction with cement barriers on both sides (which didn't happen today), 2) narrow toll booths-Sparky dinged the side  mirror on the first coach which scarred her for life, (no toll booths today), 3) trucks barreling along on both sides of you pushing you back and forth with their drafts of air (that did happen but only one side at a time), and 4) Sparky gets sleepy very quickly behind the wheel...that happened, too,, and 5) pulling into a gas station to fuel up. (That's NOT going to happen). Sparky is definitely NOT ready to attempt a fuel stop and navigate the gas pumps lane. 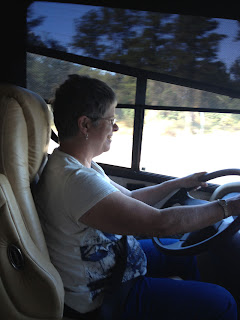 So after about 100 miles without mishap, a record for Sparky behind the wheel, she turned the wheel back over to Eldo. Sparky was content to be the assistant wheelman for the rest of the trip. (You mean the back seat driver sitting in the front seat, don't you? laughs E.) Naw....when Sparky gets back into her passenger seat, she knits, she reads, she's oblivious to the traffic....whew! Glad that's over with for today. But you know what? It wasn't that bad. I-10 was great--not much traffic today, no big city corkscrew and cloverleaf configurations, and very few entrance ramps to make a rig driver sweat as you try to figure out a) is the guy going to come onto the interstate like a bat out of hell? b) is he going to make you play cat and mouse as he slows down then speeds up?  c) is he going to run into the side of you? or d) is he going to drop in behind? How about e) all of the above? Hopefully not!

We'll be back on the road tomorrow with about 100 miles to go to Sarasota, home of "Sun 'n' Fun, our destination for the WHOLE month of December. See you later.....And Sparky knows you are just dying to know, is she gonna drive tomorrow? Heck no!...Just every now and then is enough stress for her! And besides, Eldy LOVES to drive....Sparky will just stay in the driving loop just enough to be able to drive in case of an emergency....(We're working on stretching that out, explains E.)

When we pulled into the Walmart tonight in Bushnell, who should we see but our Canadian neighbors, Carol and John, from Gulf State Park where we just left! We stopped by to say hello to them, they were bravely sandwiched between two semi trucks with just a couple of feet to spare. Then, a couple came over and started talking to us, Wayne and Betty Nelson. It turns out they were from Niles, MI, about 15 minutes away from South Bend, IN, where Sparky lived for many years and Eldy had a co-worker who worked at the same plant as Wayne did! They were in their eighties, still traveling but not full timing. Wow, were they sharp! Hope we can be in as great a shape as they were, both physically and mentally when we get to their ages, 81 and 85. The more you travel, the smaller the world gets, that's for sure!  See you back on the road tomorrow....
Posted by Jeannie and Eldy at 11:50 PM