Well, life has been moving along quite nicely until last night...The day was rather uneventful.  Sparky went to her swim exercise class, Eldy went exploring in the car for awhile--(a golf shop was going out of business), and we found an award winning great pizza place for supper in Sarasota, less than ten minutes from Sun 'n' Fun. It was called Pizza SRQ. It was wonderful! 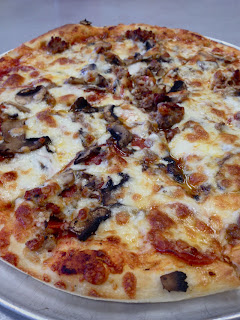 Then Sparky's Nikon Coolpix S9100 point and shoot camera died. It's a spare camera from Sparky's daughter. It's about a year old. It doesn't have the extended warranty on it, but we haven't had the best experience with that based on another point and shoot camera, the Panasonic DMZ, which is on its second repair at Best Buy and it DOES have the extended warranty. Best Buy has been great about honoring the extended warranty, it's just that after the first repair came back, the camera lens seemed to have picked up some tiny flaws that show up like Nike swooshes in every blue sky landscape photo. So the camera is back in the shop again. After the third repair, they are supposed to give you a new camera or credit towards a new camera of comparable value. We'll see what happens. The extended warranty is getting close to expiration at the end of this month and we're only on our second repair.

Sparky needs her little point and shoot for when she doesn't want to take the SLR to the beach or other not so hot locations. W-A-A-A-N-H! (That's Sparky having a hissy fit, explains E.) So today's photos are with the good ole iPhone 4, which will have to do in a pinch.

We get into bed last night, and Sparky reached for her little jar of Vick's Vapo Rub because she had some chapped lips. The jar was really warm...the contents were MELTED. That's odd...Sparky thought. The jar was sitting next to the panel behind the ceiling fan switch at the side of the bed. The ceiling fan had been running all day. Sparky thought maybe the heat was coming from inside the panel. the outside contact switch that you turn the fan off and on was NOT warm. Sparky took the cover off to inspect the wiring. The wires running to the cover switch appeared to be ok. 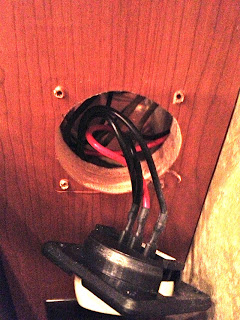 Sparky brushed her hand against the wood fiberboard panel and it was WARM. Sparky ran her hand up and down the panel checking for more heat and her hand brushed against the screw holding the panel. The screw was HOT! The screw was so hot, it was like burning your finger on a hot stove or pan lid. Sparky became alarmed. Eldo was almost asleep. "ELDY! THERE'S SOMETHING WRONG WITH THE CEILING FAN SWITCH! You've got to check this out!" We got up and immediately removed the 5 amp fuse controlling the ceiling fan from the fuse box in the closet. The ceiling fan runs on the 12 volt system that controls the house lights---the ceiling fan, the fantastic fans, etc. It appeared that the bedroom ceiling fan was the only thing on the 5 amp circuit. Sparky got the screwdrivers out, and got the panel off. (She has two good eyes, and I only have one, explains Eldo.) The capacitor (we think that's what you call it) was VERY warm. We looked at the wires, they appeared to be crimped at the junction of the little white capacitor box as if they had gotten pinched, maybe even by the screw, which was screwed in not straight. There was a burn spot under where the capacitor had been sitting...YIKES! 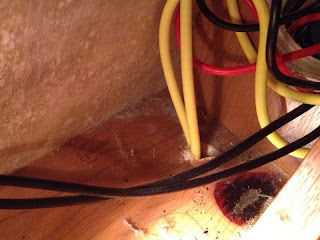 We think the crimped wire was apparently generating a LOT of heat....It looks like if Sparky hadn't reached for her jar of Vick's, we would have not discovered the wire/capacitor problem until something more serious happened. It's SCARY to think that this was a possible fire situation waiting to happen. We do keep a fire extinguisher/suppressant in the shelf unit right beside the bed,

so it was handy. But it could have gotten much worse during the day while we were out and about, or heaven forbid, while we were sleeping. The fan is now disabled and we are going to try and see if we can get a new capacitor when we go to Red Bay later.
It will probably not be a simple swap out, but a whole new fan cover plate switch assembly unit. Whatever it takes to make it right, that's all that matters. Kind of makes you wonder what else might not be operating at peak efficiency or what other wires might be hiding potential problems, you know? Sparky forgets how many miles of wire are throughout a coach, but it's a couple of miles, she thinks. A lot of possibilities for wiring to short out, wear out due to any number of possibilities, including little varmints. Guess you just have to have a lot of faith and BE PREPARED for fire emergencies. Time to get more extinguishers and come up with a fire emergency plan! Here's a different type of extinguisher we purchased at the Tampa show. It's a LOT easier to activate than the traditional red ones. But we have the traditional ones on board as well. We need to test them and know how they work and activate, something you need to do before actually needing them in a panic situation. 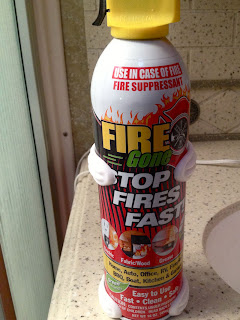 Do you have one? Would you know what to grab and where to find your most important papers in the two minutes or less you have to get out? Do you have enough fire extinguishers on board? Here's an important link to fire extinguishers and RVs..... And another one.....http://www.rvfireextinguisher.com
and our personal favorite, Mac, the fire guy, who does lots of RV seminars. Be sure to check Mac (the fire guy) McCoy's website out......It might save your life!