It's the Holiday Season...

More than half of today was spent trying to find stuff in the rig. Can you believe it? We can lose stuff in the motorhome and never find it. Sparky had lost a whole collection of ornaments for the mini tree. She spent the ENTIRE morning taking things apart in all the cupboards, reorganizing all of them, emptying and re-emptying the contents, bound and determined to find them while Eldo wisely stayed out of the way. Not only were the ornament boxes missing, but a whole bunch of rope lights we had out last year when we were here in Florida. We can't find them anywhere and we KNOW we left the site clean last year and loaded them aboard. The ornaments were found just when Sparky was about to dissolve in tears. (She had handknit and handmade most of them, explains a sympathetic Eldo.)  They were in the CAR! Hm-m-m-m-m...maybe the rope lights are in the car. Tomorrow the car gets emptied out.

It's amazing the amount of stuff that can disappear into the nooks and crannies of a motorhome. Sparky found a bathing suit she didn't know she had! And some of Eldy's missing sweaters, not that we need them here in Sarasota. After finding the ornaments, Sparky got the little 3 foot tree up. This is our second one. The lights on the first tree we got while full timing quit working even with light and fuse changes. Sparky started trying to take them off to save buying another the tree, but after an hour and a half of trying to get twisty ties off, and little doodads holding the lights securely to the branches, she gave up. The heck with THAT!  Off to buy another one, only 18.00 and here it is...TADA! 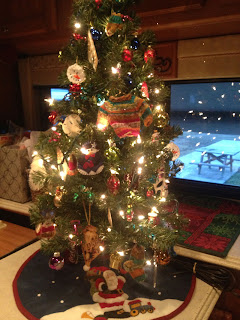 Back to trying to find stuff. You stash stuff in duffels, you stash stuff in bags that look like something else and not what the contents really are, so when you look at it, you think, "Hmph! That's not it." Sparky needs some organizational strategies, LABELS (now THERE'S a novel idea! E. chimes in) and more stackable tubs. (WAIT a second, NO, we DON'T! counters E. WE DON'T NEED NO STINKIN' TUBS!) Uh, ok, honey...I hear ya...And the next words out of his mouth WOULD be, "If you'd just clean out some tubs with yarn and crafts in them, we'd have more room and could find stuff!" We-e-l-l, maybe I'll put some stuff out at the neighborhood yard sale Saturday morning and we'll see what happens. Yep, Sun 'n' Fun is having a yard sale resort wide Saturday morning. With over 1100 sites and this place like a miniature suburb, maybe we'll get some traffic and sell some of this stuff! (Can I sell some yarn? asks E. Heh, heh, heh!)!  HA! Not if he knows what's good for him! 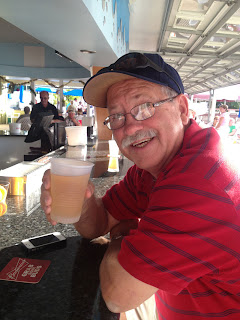 We really like Sun 'n' Fun. Eldo LOVES happy hour and actually, Sparky does, too...Two for one drafts, which makes this beer 1.75. House wines, two for one, too. Got that? Whoo-eeeee!....At this rate, Eldo is going to have to up his bike riding from 30 minutes a day to an hour a day!

The live music is terrific, something going on at poolside almost every day. Today from 4:00-6:00, it was a guy playing a ukelele and singing some really REALLY old songs. Anybody for "She'll be Comin' Around the Mountain"? Not for Sparky. Sparky is not in the old timer's group just yet, so she cut out early to head back to the rig. Eldo was finishing his supper, or he'd be moseying along, too. At 7:00 PM they had a duo of female singers by the name of Taylor and Taylor. Now, THAT'S more like it! Rock 'n' roll and awesome vocals!

Hey, hope we don't bore you with all the talk about Sun 'n' Fun. We'll be doing some kayaking, at least Sparky will. We'll be taking some side trips, visiting the Ringling Brothers Museum, checking out nightlife at Ocean Blues in downtown Sarasota, where there is some terrific blues goin' on....We'll be heading over to Myakka State Park to check that out, too. We've got ideas of things to check out, so maybe it won't be too boring after all! Sparky will do her best to keep it lively and interesting. See ya later!
Posted by Jeannie and Eldy at 11:30 PM