Every once in awhile, Sparky looks at her stats, just for the fun of it...You can look at them as daily figures, weekly, monthly or all time. Sparky usually picks weekly. She tries NOT to look at how many people view each day. With tendencies leaning towards an obsessive/compulsive personality, she could easily drive herself crazy--how come not that many people read today?  Was the title not catchy enough? Did she offend anybody? Were there too many photos? Were they too big? Was it a boring blog? Did anybody care about the topic? Does it matter? Yes, it does, a little...The blog is still for family and friends, but more strangers read it now than family! (See what she means? adds E.) So she usually looks at just the audience. Sparky is fascinated that this past week, there were 1,829 page views in the U.S., 120 in Canada, 106 in Russia, 88 in Sweden, and so on down the line. Where do the foreigners (Canada excluded :-) ) find our blog? Does a page view mean they just accidentally opened it and moved on? Wonder if they actually read it?

For the first time this week, the referring URL is our own blog address. Hunh? Does that mean if Sparky name dropped her blog when making a comment in an email or on another blog that people clicked on the link? She sure as heck didn't do that 108 times according to the number listed next to the referring URL... Hope a tech savvy guru can explain that to a not-so-savvy Sparky! (Like Rick, maybe, if you aren't too busy? :-)  Sparky has name dropped on Facebook a couple of times, maybe that's where the link is increasing the numbers. Sparky is starting to get just an inkling of how complicated it must be to promote a business, an event, grow magazine readership, a blog, things like that.

Hard to believe Sparky has written 907 posts. She has the best intentions of making the blog into a book from the first year up until now using Blog 2 Print, but it isn't going to be cheap! She missed the last 20% off sale to get the blog made into a book, she'll have to wait for the next one. Blurb is another site that lets you make your blog into a book. Hm-m-m-m..might have to check that one out....

Today was a rainy day...About time...Sarasota hasn't seen rain in over a month! Sparky got a swim exercise class in early this morning before it rained. Surprisingly strenuous, using styrofoam weights under water. Sparky forgot that if she raised her arms, she was going to go under! 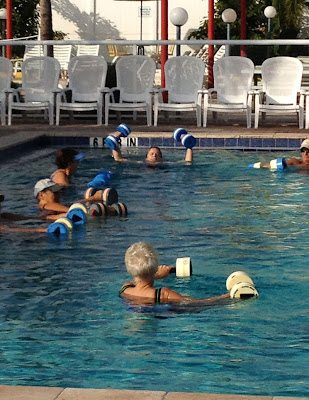 The ab work was really hard! But it felt good...(Ask her how she's feeling tomorrow morning, haha, laughs E.) Sparky thinks she'll go back for more tomorrow or maybe the next day. It's an hour of exercising totally in the water with the styrofoam bar bells. Sparky needs it!

Eldy has been good about riding his bike, despite falling off of it while getting on the other day. He happened to get on the bike using the driveway next door, swung his leg over the bar, and the bike went down in VERY soft, cushy crushed shells. He didn't realize the ground was going to give. Unfortunately, the shells gave him some bad road rash! Fortunately, it was very cushy and he's ok, not to worry. He was back on the bike the next day. Looks worse than it really is.