Sparky decided to bike the Mammoth Cave Railroad Bike and Hike Trail today, despite the threat of rain.....And, she even was going to go all the way from the Park City Diamond Caverns trailhead to Mammoth Cave National Park, a distance of about six miles...The actual mileage of the trail from beginning trailhead to ending trailhead is nine miles.

Eldy kept saying, "It's gonna rain, it's gonna rain....It's coming...Sure you want to go?" Yep, Sparky did. Eldy declined, he saw what was coming...Sparky started off....Up and down those BIG hills right there at the beginning...Get off and walk the bike a few times...Keep going....

The weather got a little darker out..the clouds a little thicker...Sparky rode on...she was too busy looking for deer and acorn caps for a craft project...Deer spotted up ahead! The deer looks like a skeleton, she's so grey and blends in with the woods and Sparky had to ZOOM wa-a-a-y in. But Sparky spied with her little eye....the doe is there. Darn, a biker coming from the opposite direction, somebody seriously into biking, he was bogeying. The deer bolted. Of course! 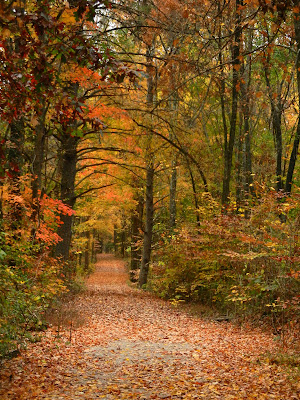 The trail was beautiful, and after the first rough part, it actually leveled out quite a bit. There is a place, a parking lot where you can pick up the trail a little further west from Diamond Caverns RV Park and avoid the worst part of the hills there at Park City. There are placards along the way that tell you more about the history and geology of the area. Cool! 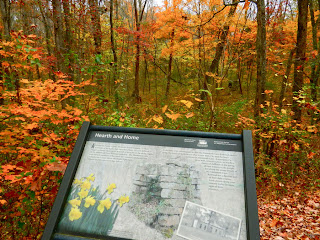 Sparky was within 2 1/2 miles of the park entrance when she stopped for more photos....PLOP!  PLOP! PLOP! Sparky had not heard the raindrops on her helmet with the bike tires rushing through the carpet of leaves.

(Good girl, she wore the helmet today!) Yep, after reading some reviews of this trail and the loose gravel causing kids to spin out and crash, Sparky got smart and put it on for today's ride.  By the way, Sparky's 2012 Trek, with the skinny tires, did OK on the loose gravel, she had decent traction, but you still have to exercise caution--some areas are packed much harder than others, and the sides of the trail are very loose. This trail is described as more of a mountain bike trail online at Traillink.com

Uh-oh, raindrops...PLOP.. PLOP..PLOP-PLOP-PLOP! It started coming down harder now...Sparky turned around and went back to the last spot where Eldy might be able to see her on the trail, the junction at highway 70. Phone call to Eldy....Signal not working well. Text to Eldy...."COME AND GET ME, PLEASE!" The rain came down harder...Sparky sought refuge under a big ole pine tree...Pretty soon, Eldy arrived....just in time...Sparky was thoroughly soaked thru her windbreaker that was supposed to be water resistant...After a bit, it just keeps coming through...Note to self: Next time, throw a little poncho in the bike bag! No photos of Sparky, the drowned river rat, but she's back home now, drying out!

Sparky highly recommends biking this trail, picking it up a little closer to the park than right at Diamond Caverns. Continue just a bit further west, watching for a small parking lot where you can get on a more level section of the trail. It's mostly level from there to the park, a few small hilly areas, but it's absolutely gorgeous. The trail follows the contour of the hillside which makes for a curvy trail but more level than the road going into the park. Sparky did five miles today, despite the rain!

It's gonna be a cold two days coming up, temps no higher than the 50's...We'll see what's up with Eldo tomorrow!
Posted by Jeannie and Eldy at 11:41 PM