Where's Eldo? In CHI-TOWN! Part I

Back in the early eighties, Eldy had a foreign exchange student, Bobbi, from "down under"-- Sydney, Australia....Eldy and his family warmly welcomed Bobbi into their family for a year. They became very close with Bobbi, and stayed in touch through the years. Bobbi is currently in the midwest, in CHICAGO, and the family began planning a trip to Chicago to spend the day with Bobbi and her husband, Chris.

Eldy's son and daughter, Brian and Kristi, and their families along with Sparky and Eldy hopped on the South Shore at the South Bend Airport. For 11.75 a person for the adults, one way, we headed to Chi-town for the day. The kids had a lot of fun on the train, and the big kids did, too!
Sparky is glad she's not the only one that's a "mamarazzi!"  (A mom who takes lots and lots of photos, documenting every moment of their child's life, according to a definition on Urban Dictionary.) Lori, Brian's wife, took LOTS of photos, and immediately started tagging everyone on Facebook. :-) Sparky is not sure how to tag exactly, she leaves that up to the younger generation, but she's working on it! 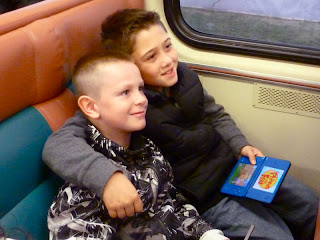 While we were en route to Chicago, Eldo spotted an Encore park that would be a great place to stay with your RV if you wanted to hop on the South Shore train and spend the day in Chicago. It's Lakeside RV Park in New Carlisle and offers Passport America rates. It has great ratings. Its right next to the South Shore line which is cause for some dings in the ratings. However, they don't blow the horns, which is a good thing, and this is not a major train line like the trains going through the Elkhart County Fairgrounds in Goshen, IN. The positives for being able to hop on the train to go to Chicago sure make up for the noise of the train cars clickety clacking on the tracks throughout the night. There are not that many trains during the overnight hours. The South Shore doesn't stop there unless you press a button at the train station a few minutes before it is due to arrive. Door to door service!

Everybody passed the time with playing their phones and electronics...What did we ever do without them?! Don't answer that! :-) 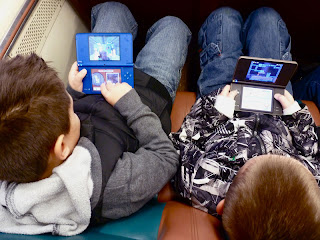 Brian and Eldy went head to head on trying to figure out how to receive the Notre Dame game on their phones, but didn't have much luck. Note the "like father, like son" position of their sunglasses! 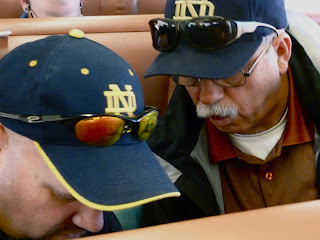 More photo opps and we aren't even to Millennium Park yet!
Eldy's daughter-in-law, Lori, and her daughter, Cate...the blog writer from this summer...If you've been following the blog, Sparky, always in teacher mode, made the grandkids blog about their two week vacation with us. Cate didn't mind, Trevor did. 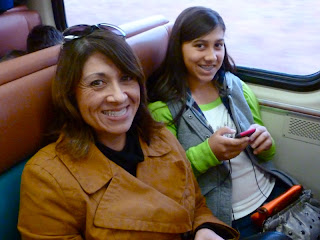 The train ride was a little over two hours and passed by quickly....The South Shore train is known for its punctuality and keeping to schedule and today was no exception! Our first stop---Millennium Park right across the street from the train station stop! See you at the park tomorrow!