A Diamond in the Rough

We are in Diamond Caverns RV Resort for a few days, three more days to go....We are enjoying the park very much. It's the kind of park where you feel very comfortable sitting outside and not doing much of anything..which is VERY difficult for Sparky to do...So off she went to the Diamond Caverns on a tour today...Sixteen dollars, no discounts for seniors, but a 2.00 discount if you are staying at the Diamond Caverns RV Park. 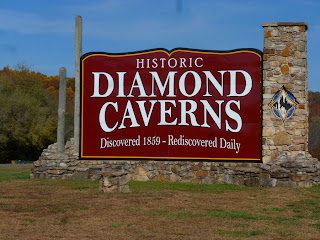 Now, Diamond Caverns is a privately owned cave, and it's much much smaller than Mammoth. So if you want to be WOWED, and have a BUNCH of different tours of differing abilities and challenges, go to Mammoth. Mammoth is a DRY cave (they don't sell alcohol there, haha, laughs E.) It's a constant 54-56 degrees. Diamond Caverns is a WET cave...It's about the same temperature, but it's got 100% humidity all the time, so it's damp, damp, damp! Puddles everywhere and drips coming down all the time.. If you want a nice, lower key, one tour fits all, interesting in a different sort of way tour, be sure to check out Diamond Caverns. The headquarters for Diamond Caverns is beautiful, modern and the center visitor's area is beautifully decorated.

The gift shop was wonderful! The geodes (a rock with a hollow center cavity lined or filled in with minerals or other composites) are AMAZING, beautiful, and come in all price ranges and colors. If you should by accident, knock over or damage one of these huge geodes by the fireplace, you break it, you buy it to the tune of $5,000! There was a matching one on the other side, and they were taller than five feet! 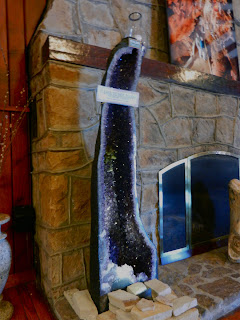 Sparky liked the gift shop almost more than the cave tour. There were all kinds of interesting minerals, rocks and cool stuff in there. The photo below is an ammonite--an extinct creature from 45-65 million years ago...They thrived in warm shallow seas. As they grew, they formed chambers, kind of like nautilus shells. When they were fossilized, the chambers filled in with minerals and calcite. These have been polished. Sparky thought they were absolutely gorgeous...(But did ya buy anything? Eldo wants to know.) He knows she likes sparkly things and just about anything the color of the ocean.
Nope! Not this trip....But Sparky might head back. What would she do with a geode on board the RV? Not a wise choice for a souvenir...so she got a pressed penny for Diamond Cavern to add to her collection instead. 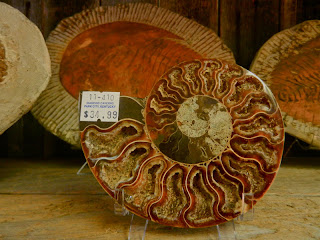 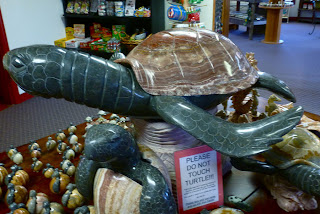 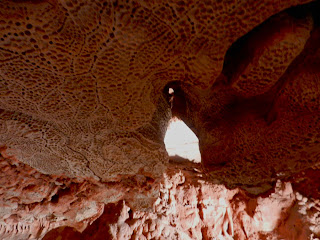 Down the stairs on the tour we went...about 80 feet down...Not very many stairs, just a few steep ones going down at the beginning and coming back up at the end. Everybody was breathing hard, including Sparky. Was it a good tour? Yes! Carmon was the tour guide for all three of us, Sparky and another couple. We learned some interesting facts about the blind creatures that live in the caves...How the cave cricket drills holes in the "sand" floor of the cave to lay her eggs, how the cave beetle comes along and finds the cave cricket eggs, how when the cave beetle eats the cave cricket eggs, it gives off such a strong smell, that the cave cricket can find the predator of her eggs, and eat him! Nature's paybacks are HELL! We also learned that if the cave cricket doesn't make it to the surface every four or five days to obtain additional food, he eats his own back legs off! UGH!

We learned some more interesting stuff about the "cave wars" in the 1920's and 1930's. Such competition for the tourists' dollars back then led to claims about "you don't want to visit _______ Cave, they have tuberculosis there..."  People got married in the caves, often enough in Diamond Caverns way back then, that an altar was built for ceremonies! 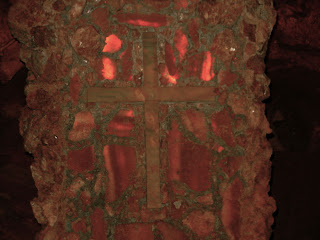 After cave protection laws were passed, weddings ceased to be held in the caves and the cave owners began protecting the cave formations. What's amazing, is that tourists came in droves to the caves, women wearing their long 1900's dresses and hard soled shoes to explore the caves. They crawled on their bellies, they got muddy, they got dirty. Guys, they always did that! People didn't see much of the caves with what little candlelight and torches they had in those days, yet they still came in droves to explore them....You had to wonder why....

Sparky enjoyed the tour today......above ground and below....and she didn't get claustrophobic!  Tomorrow, we'll show you the visitor's center at Mammoth Cave National Park.....
Posted by Jeannie and Eldy at 11:21 PM