Oh, boy, is this a great trail or what? Where else can you get on a trail that's paved, LEVEL, and beautiful scenery? LOTS of places, that's where...but here in Elkhart County, this is one of the prettiest trails we've ever been on.

Eldy's daughter, Kristi told us about this section of the Pumpkinvine Nature Trail that starts in Middlebury and goes to Shipshewanna, a distance of six miles one way... we've been on other sections of the Pumpkinvine Trail when we've come back to Indiana, but we hadn't been on the Amish country portion of it.

Eldy got himself a new bike after seeing how wonderful the hybrid bikes are. He tried out Sparky's bike several times, and after hearing that the Elkhart Bicycle shop was having a sale on Trek's, we headed over there to take a look. Eldy usually waits quite awhile before making up his mind, but a big bike ride with Kristi was coming up, a 12 mile ride on the Pumpkinvine Nature Trail, so he took the plunge today! He loves his new bike! He was ready to ride!

Off we went to ride. we parked at the Dairy Queen on County Road 13 in Middlebury, where the trail picks up on a gravel path behind the store. They let you park in the parking lot.....beautiful day...in the high sixties yesterday, sunny, late in the day, around 5:00 PM. The scenery was gorgeous...

Picture many Amish and Mennonite farms of different sizes and colors..... 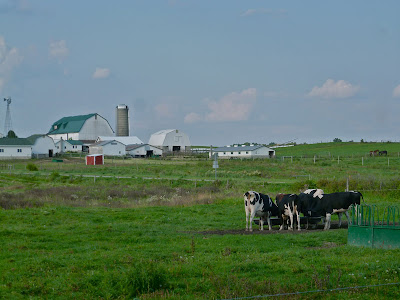 Horses in the pasture....Amish men plowing the field with horses and walking behind their plows... 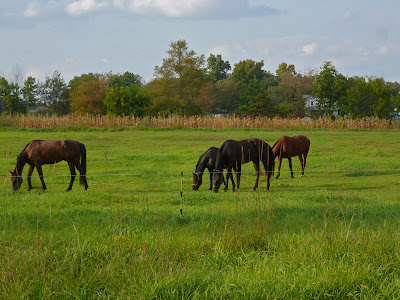 The women hanging out their clothes on the line...We passed many Amish riding their bikes that use this section of the trail to ride from Middlebury to Shipshewanna to get to jobs, shopping areas, other farms and maybe visit friends.

We passed a camel farm! Not sure what they are doing with them, but there were several and some young baby camels, too. 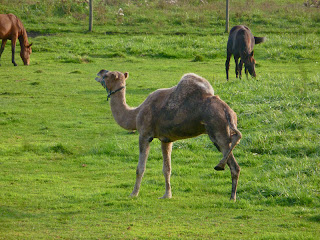 It was a regular menagerie of animals today...Sparky almost forgot the sheep! 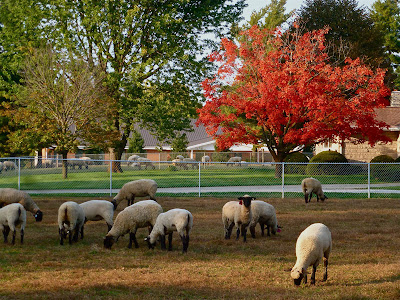 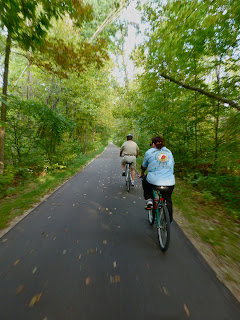 We rode six miles from Middlebury to Shipshewanna. As the trail ended in Shipshewanna, Eldy had gotten so far ahead, he headed up the street and around the corner to check out where you can park if you start on the trail in Shipshewanna. He was on his way back to meet us at the trail end when he heard, "CLIP-CLOP, CLIP-CLOP" behind him. He knew there was a buggy coming up behind him. No big deal...There are lots of Amish and Mennonites that ride bikes every day and share the road with the buggies and cars. "CLIPPETY-CLOP, CLIPPETY-CLOP, CLIPPETY-CLOP!" The horse was gaining on him. You had to have been there. He said it got louder and louder, and it was sort of like that movie, "The Headless Horseman" where Ichabod Crane is on an old nag, crossing the bridge and he hears the horseman coming up behind him. Eldy started pedaling faster.  The horses's hooves got louder and louder. He came up to the stop sign at the intersection, stopped to catch his breath, looked up and right there, was the horse's head! He wasn't sure what that horse was gonna do! Eldy came up to us, back at the trailhead, he was still breathing hard, and said, "Sparky, you missed the photo of a lifetime!" I'll bet I did, with the look on his face as the horse was gaining on him and then as he looked up next to him at the stop. I'll bet his eyes were about ready to pop out of his head! Those horses can be TALL! And they can get a little nervous, I'm sure! Back we went along the trail, retracing our route for a total of 12 miles today....It was wonderful!

We had a great time biking on the Pumpkinvine Trail today...so nice that we are going to do it again in a couple of days with Kristi and Eldy's grandson, Connor.  See you later!