It's a big day for Eldy's daughter, Kristi...A big day because over a year ago, Kristi had never run a race. Kristi was never athletic when she was a child. She was overweight most of her life and had become much more so after becoming a mom. Eldy was so concerned about her last year when he saw her that he pushed for her to do something about her weight. As parents, you worry about outliving your kids when something like this is going on. Kristi made a commitment to herself and her family. She decided she needed to do something and she was just going to have to start now.
She signed up for a class with Roy and Christine Pickler, from Middlebury, IN, season 13's Biggest Loser--NO EXCUSES! show contestants who are offering classes in lifestyle changes to help people lose weight. Doesn't Roy look like Santa?  As a matter of fact, he plays Santa at Christmas time.

When Roy, 63, began the show, he was 306 pounds and suffered from many physical problems. His wife, Chris, at 5'3", was 240 pounds. By the time they were voted off, Roy had lost 92 pounds and Chris had lost a lot herself. 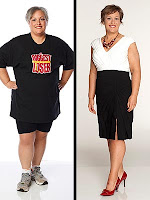 Sparky has never seen the show, but understands that it truly is a weight loss journey that can change people's lives for the better. Roy and Christ didn't win the show, but they are winners in every other way! They are now running classes to help others get control of their eating habits and change for the better. Kristi considers this show and the Picklers to be some of the motivating factors that got her started on her weight loss journey.

In the past year, with the Picklers help, and some close friends supporting her goal and her own determination, Kristi has lost 60 pounds and many, many inches through exercising, eating better and taking better care of herself. She now bikes, jogs regularly, runs 5K races and is working hard to keep this new lifestyle her way of life.

So today was another big day for her...the 5K race...the 8th Annual Middlebury Walks for a Cure. It takes place at Das Essenhaus in Middlebury, a Mennonite restaurant with awesome Amish food. There's a 5K Run/Walk, a 1K Fun Walk, vendors, a raffle with great prizes, and "Izzy", the PINK firetruck. Survivors of breast cancer and people wanting to remember a loved one, sign the truck that travels all around promoting breast cancer events. Sparky signed the truck in honor of her sister, who is battling breast cancer.... 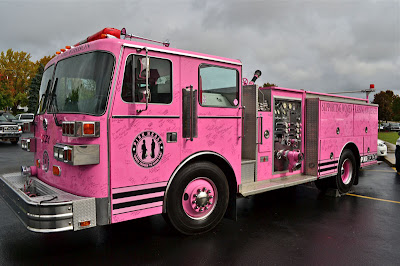 It was a COLD and RAINY day, but a festive one because it's a  PINK event, and everybody gets "pinked out"...as you can see.......Their shirts say something about "Get your mammograms" and "Feel your boobies!" 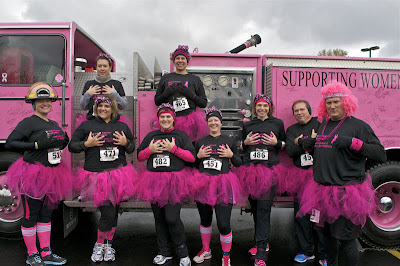 This is a pretty silly bunch, but a great team that loves to support charitable causes and each other through their training and their running.... 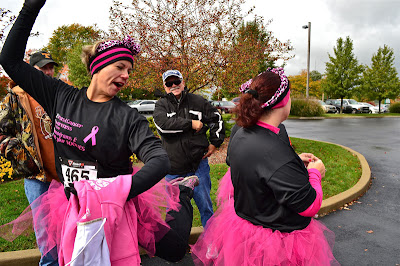 Kristi had her best time ever despite a brief downpour of rain and cold temperatures of about 46 degrees! Eldy was very proud of his daughter..... 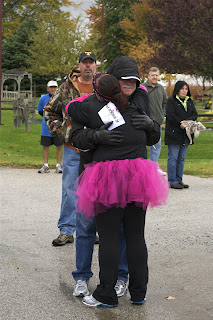 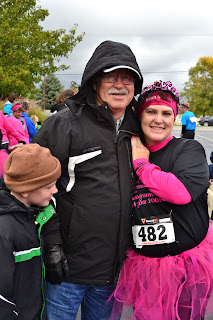 A cold rainy day spent watching Kristi and her friends shine....Congratulations, Kristi, and team BAMF. (Don't ask Sparky what the letters stand for, it's a team thing and not printable! explains E.) and keep on keepin' on!