Sparky had good intentions today, she really did! She was going to ride the Maple City Greenway...for quite a few miles....The Maple City (Goshen, IN's nickname for all the beautiful maples in the city) Greenway consists of many trails of many differing lengths. The city has been designated as one of just 190 communities all over the United States as a "Bicycle Friendly Community" because of its demonstrated ability in providing safe cycling and encouraging residents to bike for recreation and transportation.  Eldy had errands to run, so he dropped Sparky off at roughly the beginning of the trail and Sparky WAS going to ride from Elkhart to Goshen, the original plan. The Maple City Greenway runs alongside the railroad tracks for miles, then passes through neighborhoods, a cemetery, etc. and then Sparky was going to be meeting Eldy at the other end.

Three miles down the road, Sparky rode by Oxbow County Park, a BEAUTIFUL park with lots of amenities and paved roads. Sparky decided to do some riding inside the park, then venture back out onto the Maple City paved sidewalk style trail. Sparky decided to enter the park via the Greenway trail which can lead into the park if you want to cross the street. Sparky did.... 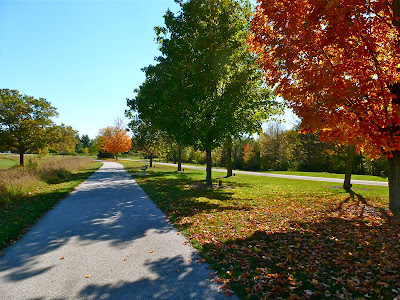 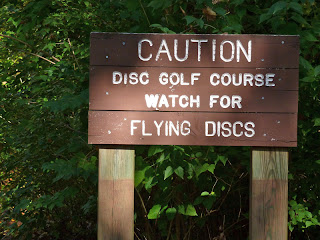 She looked both ways as she rode along the road, next to the paths for the disc golf course through the woods on each side of the road. No discs flyin' around to the right....To the left--------- 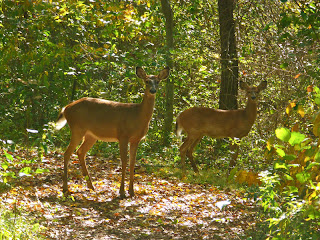 TWO does!  Wow! How about that?! They stood there long enough for me to take a photo, then a big snorting "WHOO!" they got my scent and boogied outta there.

The park has an archery range and they charge for that as well. There's a canoe/kayak launch, not sure if there's a charge for that or not.
There used to be an observation tower, sort of like a fire tower that was a tradition for people to climb. Arsonists burned it to the ground. No matter, Sparky remembered how beautiful the park is, how far you can ride or walk inside the park, and you can get lots of miles in for a ride if you wanted to...Sparky thought she would keep riding through the park exploring and racking up some miles, but that was not to be......Sparky passed through a short lowland section of the park with a little boardwalk bridge and causeway which is often flooded when there's been a lot of rain and then is closed to vehicular traffic. There was a sign that said, "CAUTION--SLIPPERY!" which Sparky duly noted but didn't take a photo of. Today, there was some runoff, but not a whole lot. Sparky raised up her legs out to the sides and sailed through the little flooded roadway....WHEE-E-E-E! 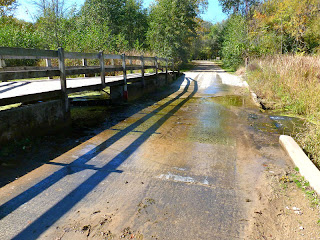 Later, after seeing the deer and exploring some more of the park, Sparky decided to come back through the little causeway (?) saw the "SLIPPERY" sign again from the other side coming back and briefly debated (you know what's coming, don't you?) whether to walk the bike over the little bridge or not. There was a couple standing on the bridge, so she decided NOT to take the boardwalk. She cheerily called out to the couple, "Hey, did you see the deer?" and started to sail BACK through the little flood, feet out to the side just like before....Only this time, the tires had gotten enough coating from the slippery lichens laying just beneath the surface of the water the first time through.....(Ya didn't see the greenish tinge in your photo the first time did you, Sparky?) Nope!  And the tires did a tip over, a slide over, like they were coated with grease, heading downward so fast, Sparky didn't have time to react much except to lay the bike down, probably a lot like a motorcycle rider does when he goes down on the bike.

Only Sparky laid the bike down with her left leg extended outwards, which thankfully, slid forward and not at some weird angle, but stretching some tendons and muscles MUCH farther than they were intended on her left leg. She landed on her butt, HARD,  with a SPLASH! right in the middle of the deepest part of the puddle, thoroughly soaking her jeans on her left side. Talk about feeling stupid....The folks called out, "Are you ok?" And Sparky, with injured pride and a probably pulled back thigh muscle replied, "Oh, FINE!" and looked down at her pants. "I'm gonna have some explaining to do when I get back to the car," she says. And with supreme effort, walks the bike out of their sight, trying very hard not to limp. Sparky was really lucky. She WASN'T wearing a helmet. She could have just as easily fallen backwards and hit her head instead of her butt. She IS going to wear a helmet on all future bike rides from here on out. It's been about a 50% of the time thing with the helmet.

She called Eldy and just said that she had fallen, nothing was broken, the bike was ok, and he asked if she wanted him to come get her. Not having gotten in a good workout, really, only about four miles when this happened, she dumbly said she wanted to explore the park for another twenty minutes and then she'd be ready to go....After trying to ride a little more and take some more photos, getting off and on the bike which REALLY hurt more than riding the bike did, Sparky called it a day.....Time for ice!
Ice, ICE, baby!