Eldo and Sparky at School

Yesterday we went to the grandsons' elementary schools for Grandparents' Day. It's with always mixed emotions when Sparky and Eldo head back to school. We look at it from two different viewpoints. Eldy thinks back about his school experiences as a student, Sparky thinks about her experiences as a teacher when walking into a school. Sparky gets excited to be back in a school, Eldo, not so much so.  :-)  But the grandkids are always glad to see us. 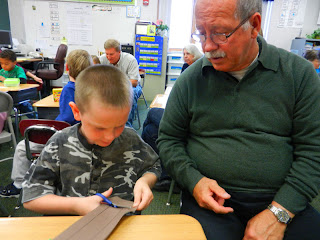 Because there's always a student who has no grandparents there and feels badly,  and Connor and Trevor have two of us there when we show up, Sparky always goes to the underdog to help out...the one kid that looks really sad or is even crying because they don't have anybody there on this special day. And there were at least two or three in both the boys' classes today, so Sparky became a "foster" grandma for a little while today. Trevor and Connor didn't mind...Eldy hadn't seen some of the new technology in the classrooms, like this electronic, interactive whiteboard which now takes the place of chalkboards in the classroom. Sparky really enjoyed this piece of technology in the last couple of years that whiteboards came into use towards the end of her teaching career. 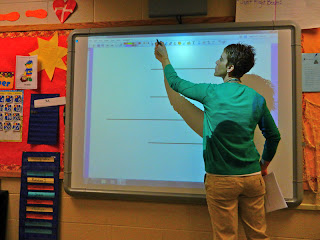 The classrooms were packed! Sparky was shocked at that, because parent/grandparent attendance at school functions where she used to work over the years was often poor. LOTS of grandparents in both classrooms today! 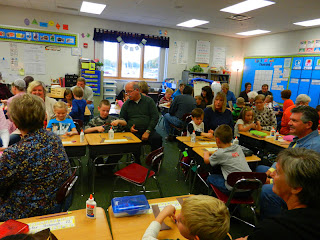 We went to Trevor's Grandparents' Day first...Trevor had a hard time putting his Pokemon book down during a lull in the craft activity. Papa is a little peeved....Trevor's teacher reminded him that he doesn't get to see his Papa every day! 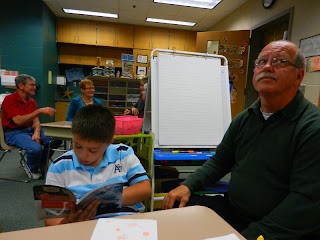 Trevor became a little more involved with Papa at that point..... 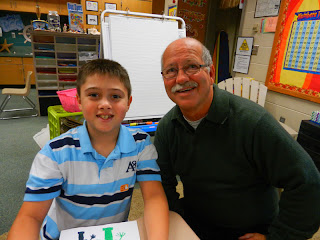 Trevor's class did a little song about vowels and there was a little disagreement over who was going to start it off....But they got the job done! 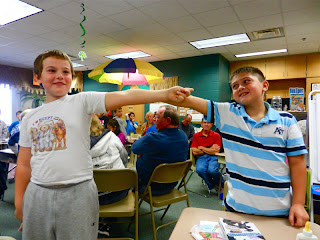 Everybody did a little craft activity and had to write a little something about their grandparents. The boys did a great job. And of course, we had to go visit the school Book Fair, which involves a struggle between buying a book that the kids can read versus one they are going to look at the pages and pictures for about five minutes, and then get bored with it. Buy Pokemon Strategies Game book or an age/skill appropriate reader? Sometimes we end up getting one of each! Last year Sparky endured scathing looks from a VERY disappointed Trevor after picking what SHE thought a young boy ought to be reading! After we completed our "homework" for the day, Sparky and Eldo headed over to Elkhart to meet Eldy's friend of 49 years, Mike. 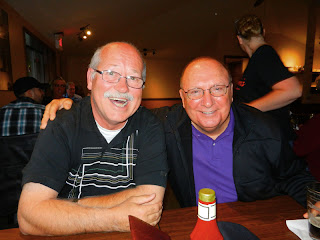 Mike and his wife Barb, shocked the heck out of Eldy with a surprise visitor to their house, another old school chum of almost as many years, Paul and his wife, Sheila. Somehow Sparky missed getting a shot of the couple together, but we all had a wonderful time and amused ourselves in different ways...How many guys does it take to find out the Jimtown's high school football game score? 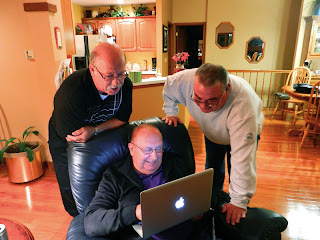 While the gals played a good old fashioned game of floor checkers.... 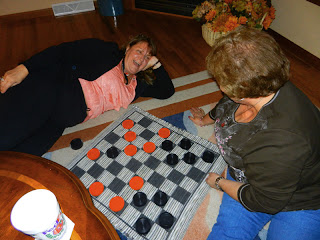 We had a great time at school today and we had a wonderful time with old friends this evening....As we get older, we appreciate our friends so much more as we are all mindful of how lucky we are to still be here and to be able to share the wonderful connections, memories, and presence of good friends. We treasure these times very much......