Geez, it's hot...we've had the AC on in the car, but not in the rig...we're cool enough with the fans going and the awnings out.....Sparky actually had to put on sunscreen to go bike riding today! 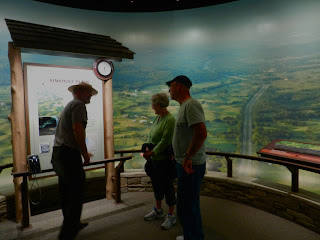 Sparky loves technology...and when there's buttons to be pushed, phones to pick up, videos to watch and lights that sparkle and move like running movie theater lights, she's hooked! Mammoth Cave National Park's Visitor Center delivers all this and more..... 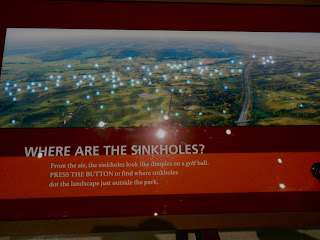 Lots to learn here about EVERYTHING Mammoth Cave and the surrounding area.....You can see the ice age advancing and retreating through the different geologic time periods by pushing buttons for each era...It was interesting to see the equator was not always running through the center of the earth, the equator used to on a much more skewed angle. Sparky didn't know that. There are a LOT of things Sparky doesn't know, but she likes learning new things! Eldo does, too! 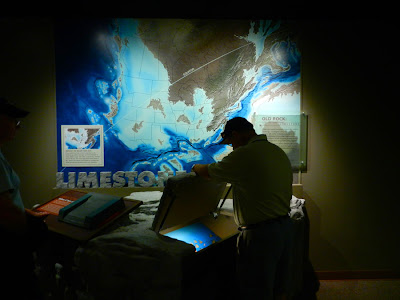 After visiting the visitor's center, Sparky headed out for a bike ride along the Mammoth Cave Railroad Bike and Hike Trail.....Sparky did the trail the first time on the part that is right across the street at the Diamond Caverns site. The trail was rigorous and VERY hilly--too much even for Sparky! It's beautiful though, this time of year.....The trail actually tells you to get off your bike and walk it for bits of the trail here and there. It is loose gravel and with all the leaves covering the trail, Sparky was not as comfortable riding today...(Because she didn't have her helmet on! Tch! Tch! Tch! chides Eldo.) So, Sparky turned around and went back, downhill all the way...WHEEEEEE!  However, if you can handle the hilly trail on this section, there are a lot of things to see along the trail...openings lead to informational signs about the geology of the area, points of interest like historical cemeteries, buildings, and other stuff. There are more level sections of the trail nearer to the Mammoth Cave National Park right outside the park and they appear to be a more packed surface. We are going to ride that tomorrow.....Right, Eldy?  Right? Right! 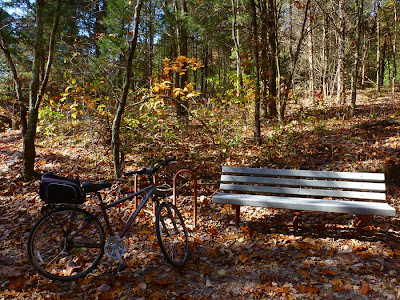 Later, we visited the South Central Kentucky Cultural Center in Glasgow, a FREE museum that has the early history of the geographic area known as "The Barrens"--a system of five counties in Kentucky from the past to . It is housed in an old pants factory and is 30,000 square feet of history. Some really cool stuff there....Sparky saw things from the fifties that really captured her imagination--A Betsy McCall paper doll set...Sparky remembers playing with those the minute she saw the exhibit. But it took the exhibit to pull that memory out.... 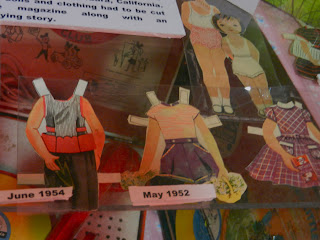 The museum is on Water Street in downtown Glasgow, KY, about a half hour from Diamond Caverns Campground. Tools, firearms, a log cabin, a gristmill from the mid 1800's, a general store, a 1940's kitchen, a pharmacy, an extensive military collection, a doll collection, a one room school house and a town square as it looked at the turn of the century. This was quite a museum for being free, and it was fun to relive certain memories of growing up in the fifties and sixties....A nice collection of memorabilia, beautifully displayed...and FREE, but they hope you will consider making a donation.....
The last thing we did today was visit Barren River Lake State Resort Park, about 10 miles south of Glasgow, KY on highway 31....A beautiful day to explore the park...We didn't stay too long, but saw a nice bike trail, a scarecrow trail...... 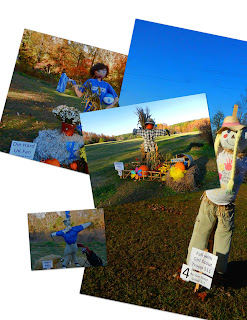 And some beautiful scenery......WOW! We'd definitely like to revisit this state park! 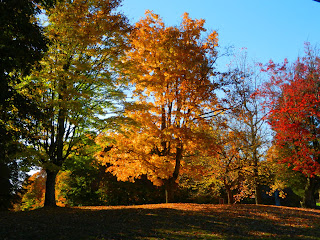