We've had THREE bike racks in four years....Why, you ask? Because at first, we didn't know anything about them! And because at first, we didn't have a hitch on the back of the CR-V. So-o-o-o-o...here's what we know about bike racks and really, it's pitifully little.  But we wanted to share our experiences in hopes that it helps someone else from making similar mistakes....Our first rack was before we were traveling in a motorhome, so we bought one for the car. Sparky was just starting to get into bike riding at this time..... 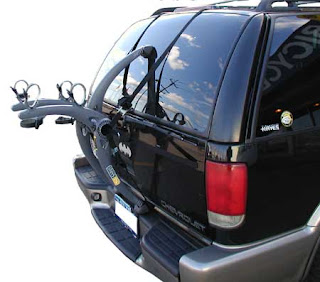 This is not the Honda, but at the time, Sparky had a Ford Escape Hybrid with no hitch, and she only had one bike....We had a lot of problems with the straps moving around a lot, we were forever adjusting and tightening the straps....There were times where the bikes had moved so much they were in danger of falling off! Probably user error, and a fit problem, but, these were the problems we encountered. The rack gets excellent reviews and is relatively inexpensive, probably the main reason Sparky bought it in the first place! Current price ranges from 120.00-259.00 depending on the model. Here are some highlights from a review for a three bike Saris rack from Amazon....Sparky's notes in brackets.

a 4.5 out of 5 star rating from Bicycling Magazine....ratchet straps keep your bikes secured to the rack arms, exclusive anti-sways, and articulated rubber feet to protect the finish on your vehicle. A breeze to install, [getting the straps ratcheted with the right angles and placement was NOT easy] with vinyl-coated hooks that strap securely to the car with spring buckles. Arched design fits practically any vehicle, from sedans to minivans, and even most cars with spoilers.

Constructed from heavy-duty, 100-percent recyclable plastic.. The injection-molded arms and legs will never rust, and are capable of supporting up to three bikes with ease. The arms separate the bikes on different levels to ensure that they won't rub or touch during transport. And because it's a trunk-mounted rack, your bikes are always accessible and easy to put in place. [You have to take the whole rack off to get to your trunk.] All Saris bike racks carry a lifetime warranty.

After having the bike rack shift and move and the straps not remain in position consistently, Sparky sold the bike rack and on to rack #2---another Saris, different design.... 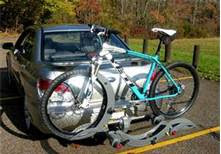 Bike Rack #2--Saris Thelma Bike Rack...This one had plastic wheel well trays, it was lower, and we thought easier to load the bikes. By this time, we had purchased our first bikes together, heavy Navigator Trek bikes. Here's what one person has to say about the Thelma bike rack.

Strengths:    Easy to install and remove, wheel tray folds down for compact storage, pretty stable rack, easy to load and unload bikes, light weight (down side is can't hold up weight)Weaknesses:    No access to tailgate with bikes on (but which one does except Thule Revolver)
Ratchet strap for the wheels are poorly design and cheap
Wheel size specify bike carrier (I manage to fit a 24" kids bike on to a 26" carrier tho) - no 29er
Material will not last long for everyday usage
No security system
Will not work with bikes with front fender
Weight limit means no sub $200 bikes

What happened with this rack was, a person who shall remained un-named, backed the car up with the bike rack in the down position, and cracked the plastic wheel holder frame so we had to get a new rack. We felt this rack was cheaply made and the plastic not very durable. So-o-o-o-o...we bought a Thule bike rack.

Bike Rack #3--Thule Helium Three Bike Rack--why a three bike rack? Because it was on sale (around 260.00)....and we thought maybe a grandkid's bike might be on it in the future. We installed a hitch on the car, now we're getting smarter. (or not!) We paid more money for this one, thinking it was going to be more durable. It has a built in bike lock but could be easily cut. It's one of the lightest bike racks out there, but seemed to be made really well. Thule is a great company, it stands behind its products so here we go again.... 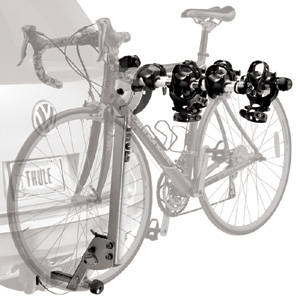 The Thule 971xt Helium Lightweight Aluminum 3 Bike Hitch Mounted Bicycle Rack is almost half the weight of traditional hitch racks. The newly designed Helium XT Stinger provides better ground clearance and accommodates both a 1.25" and 2" receivers out of box. Bikes are fastened down on Thule's T3 frame friendly cradles, while the 955 No Sway Cage prevents bike to bike contact. The Hitch Switch, quick release lever allows easy access to the rear of the vehicle and conveniently fold down bike arms when not in use. Bikes must be removed before lowering the rack to access rear of vehicle. The Helium hitch rack provides narrower bike arms for easier loading, ideal for women's and kid's bikes due to the smaller size frames. Installation - No tools required, simply insert bike rack into your receiver hitch and tighten adjustment knob located at the bottom of the bike rack mast. The Helium provides maximum bike security with integrated locking cable that locks your bikes to rack and a locking knob that locks rack to receiver.

And the problems started...Two of the rubber straps that wrap around the posts of the bike broke, probably from over stretching them and trying to make the bikes secure, but the holes on the rubber straps do stretch out over time. Thule sent us new ones. A plastic post where you latch the straps to, broke. Thule sent us a new assembly, the wrong part. We rigged the fasteners to work but it was a bad solution. The main problem of this rack? You have to lift the bikes to about shoulder level to get them on the rack. Eldy has shoulder problems, Sparky just found our bikes very heavy to lift. The cable wires would get caught on the bars trying to lift them across to the first position on the rack closest to the car. Although this was a three bike rack, we took the middle rack assembly out to have more room for our two bikes and they still came in contact with each other. The bikes bounced a LOT on the frame.

After some time went by, the individual rack assemblies where the bikes are strapped down started sliding forward, causing the bikes to come in contact with each other and the bikes got scratched. The cradles that hold the bike posts became more and more difficult to swing into place. After more than one piece on the rack broke, we were getting frustrated with the quality of the bike rack and loading the bikes was a chore and getting more and more difficult. Once Sparky got her new, lighter Trek bike, it became easier but we still weren't happy with the rack...The guy who had installed it at a sporting goods store where we purchased it had not place the mounting bar in the hitch correctly and the weight of the bikes caused it to bend downward. The bike rack extended too far out behind the car. We thought it was just a matter of time till the hitch bar came out or someone hit our bikes.

Eldy recently committed to replacing HIS bike and he now has a new Trek Verve 3.0! Elkhart Bicycle Shop and Steve Peterson, the owner, did a GREAT job of fitting him for his bike, and gave him a nice trade in for the old Navigator bike. Not wanting to get our new bikes scratched, we decided to get rid of the Thule rack and since Steve did such a great job for Eldy, we purchased a different bike rack from him. Hopefully, it's the last one for a LONG time!

The jury remains out on this one but you can read reviews online. Sparky was afraid to look, we just knew we wanted something LOW this time and easier to load...we love it so far....really really easy to load, no lifting up high, the bikes don't bounce as much as they did on the Thule, they don't stick out from the back of the car as far....One concern we are wondering about is the metal ratcheting mechanism, the "j hook" part that ratchets up and down to hook the bike post, rust going to be an issue over time? We ordered a two bike cover from Swagman to protect our new investments all the way around, that should help.
Everyone has their own preference and their own way of carrying their bikes. Some people carry them on their ladders on the backs of their rigs, but our ladder is up too high to comfortably do that, so that's why we ended up with hitch bike racks. Hope this little review of the ones we've had helps you see what's available out there. We're sure that some people have some of these racks and are VERY happy with them and have never had a problem. That's what's great about having choices in this country, you get to pick what you like best!   Thanks for reading!
Posted by Jeannie and Eldy at 11:36 PM