A Visit to Ruthmere Mansion 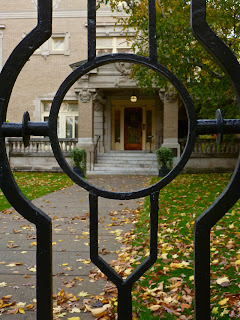 Sparky's friend, Jeannie, from South Bend, came over today for a visit. She and Sparky decided to visit the Ruthmere Mansion just down the road a few miles from the campground. It's a mansion. It's a museum. It's wonderful! The mansion is named for the only child of Albert and Elizabeth Beardsley, one of Elkhart's most prominent couples in the early 1900's. It's named for their daughter, Ruth, who died in infancy from hydrocephalus, water on the brain. The "mer" part has the meaning of connected to "water" or the "sea". The mansion sits across from the Elkhart River. The tour was 10.00 a person, and lasted an hour...No photos are allowed.  :-(   But after seeing the incredible treasures inside, the Cuban mahogany walls everywhere, the priceless china and glassware that the Beardley family had, the artwork, you can understand why the curators of this 1910 Beaux Arts mansion would not want photos plastered all over the internet. This mansion has been featured on A & E "Castles of America", and is on the National Register of Historic Places. It's one of the most opulent and grand places in America and it's right here in Elkhart! 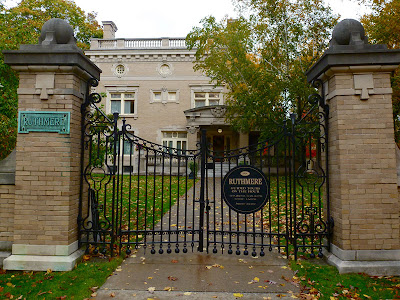 This 1910 home of Albert and Elizabeth Beardsley is decorated with SILK wall coverings, there are hand carved woodwork, wall murals painted on fabric and ornate Victorian style decor is everywhere. There are original Rodin statues, fine art, Tiffany lamps, paintings and vintage autos. When we got to the garage, there were three antique autos, and one of them was a Milburn electric car built from 1912 to 1920. There were thousands of them made back in the early 1900's. Sparky didn't know that! It didn't have a steering wheel, but a "tiller/rudder" like you see on a boat! They were made in Toledo, OH. Hmmm! What goes around comes around, they say.....Isn't that the truth!
Sparky has seen a LOT of fancy mansions on her travels around the sun with Eldo, but this was one of THE fanciest she has ever seen. Fancy to the point of taking your breath away as you walk into some of the rooms... There was an amazing intricately set stained glass skylight on the second floor. There were beautiful stained class windows in the Craftsman style on the first floor. There was so much handcarved wood and elaborate decor, you couldn't take it all in.  Wow!
Sparky and Jeannie knew that the pineapple was a symbol of hospitality, but they didn't know that the pomegranate, featured predominantly in carved relief all over the house, was a symbol of wealth and prosperity. There is gold gilding everywhere. This house certainly gave them bragging rights...However, they were not your typical high society couple. Mrs. Beardsley started the first "bookmobile" in Elkhart. She wore makeup when it wasn't "in" at the time, she smoke and cussed when she thought the situation fit. She also drank a fifth of champagne every night to help her sleep! Albert Beardsley, her husband, was one of Elkhart's most prominent citizens. 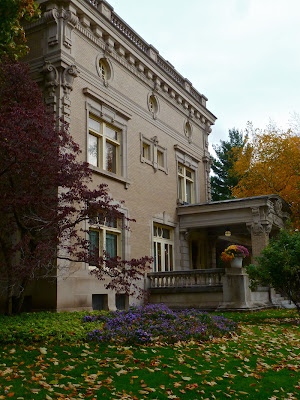 What else was cool about this house? The stories behind it...The second set of Beardsleys who lived in the house, raised a lot of boys...they set up bowling pins downstairs in a narrow hallway leading to the greenhouse. The sides of the walls have murals painted depicting scenes from Italy all over them. Bet the mother had fits about that! One of the statues on the staircase leading from the lower level has a broken arm as one of the boys was throwing a football and hit the statue...These are no ordinary statues, they had to cost an arm and a leg!   HA! Couldn't resist that one! :-)

The kitchen had a set of china that Abraham Lincoln dined from...the family room had a viewing scope stand that was the precursor to the Viewmaster slide shows, you know the little handheld viewers that you would insert a disc into and pull the lever and the disc rotated around showing you scenes of various themes? This was a full size stand viewing scope. They would view their slides of their trips on it. It was very interesting!  They had a piano/player/organ called a Choralcelo. In the foyer, the piano plays as a piano. In the library, there are 17 pipes installed under the floor that reverberates the music as organ music when the piano is played. Almost like surround sound, only it was the early 19th century.

They had a shower in the master's bedroom that had a cage of pipes inside the shower, shooting water--probably the first "walk in shower" with multiple water jets, we think! The house even has a central vac system, unheard of in those times. There was a sprinkler system in case of fire. The walk in closets have automatic lighting that comes on when you open the door. This house had everything and more back then.....

It is an amazing place....We HIGHLY recommend this tour when you visit Elkhart. It's just 15 minutes from the Elkhart Campground. And, a second historical home, the Havilah Beardsley House, is nearby, on the northwest corner of Main Street and Beardsley Ave.  Dr. Havilah Beardsley was the founder of Elkhart. Two beautiful mansions within a block of each other...Nice!

Lots to do in Elkhart and the surrounding area, we are really enjoying our stay....See you later!