We've Got Ourselves a CONVOY! 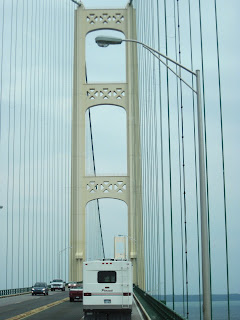 We left Gaylord this morning and headed to the Mackinac Bridge. We were concerned about the winds in excess of 30 mph. while driving...we knew that sometimes the bridge closes traffic to high profile vehicles, but we weren't sure what wind speed would shut us down.  I guess they aren't that sure either as we asked at the toll booth at the other end and they said it depends on the wind speed and the direction. As we approached the bridge, electronic signs warned of high wind speeds, and cautioned RVs and trailers to cross the bridge at 20 m.p.h.  Eldy was getting nervous. When we got to the bridge entrance, campers, trailers, RVs and semis were directed into one lane on both sides of the bridge, and either police or Mackinac Bridge workers were waiting for a line of travelers before taking a convoy across the bridge. Guess they didn't want any yahoo boogying across the bridge at excess unsafe speeds. As we traveled over the bridge at 20 m.p.h., (normal bridge speed is 45 m.p.h.) the wind was not very noticeable, until the highest point of the bridge crossing. It was a direct crosswind from west to east. The gusts seemed like a LOT more than 30 m.p.h.!  We crossed without any incident, but once we got on the other side, it wasn't long after before an older motorhome in front of us had an air conditioner cover blow off the top of the roof which bounced into our lane. Luckily, it bounced out of our lane before we reached it! 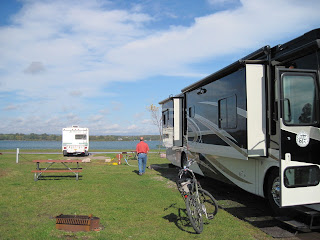 We are now situated at Aune (Aw-ney) Osbourne Campground, which is located on the St. Mary's River at Sault Sainte Marie between Lake Huron and Lake Superior. We were here last year with a waterfront site which was fantastic. You can watch the barges go between the locks heading back and forth from Lake Huron to Lake Superior. The barges are HUMONGOUS! This campground is so popular, that you have to book way ahead of time to get a waterfront site. There are very few trees, so the sites are very out in the open. We were not able to get a waterfront site, as we just decided to call today. But, we are on one row back from the St. Mary's River, so it will still be awesome to see the barges! (You know you are getting old when the sight of barges is an exciting event! My mom in her 90's, used to love watching the barges on Lake Huron with her binoculars, and at the time, I thought to myself, that will probably never be something I'd get excited about)....WRONG! Here we are, at the ages of 60 and 62, and barge watching is going to be the highlight of our week!
Posted by Jeannie and Eldy at 6:32 PM