OK, here are the photos I promised you from Sunday's waterfall extravaganza! If you are ever in this area, stop by the welcome center in Munising as you come into town and pick up the waterfall and lighthouse guide that tells locations and info about the falls and lighthouses..it's a very good guide.

Now for the story from Wayne and Holly--when they pulled in next to our site at the Munising Tourist Campground, I noticed that their Prevost coach had "Angola Coach" written on the side of it. I got excited, because I knew that Angola, IN (my last hometown) had a place, Angola/Pantera, that customizes and refurbishes interiors of big RV coaches/busses for people. So I asked them if they bought their coach there, and they said yes... We proceeded to talk for the next half hour or longer about my old stompin' grounds at Angola. They knew several of the places I used to frequent, and we traded stories about traveling and dining there....we exchanged lots of information and tips as RVers do, and then we shared some travel stories. After telling them our RV + tow car u-turn at the toll booth story (see early blog details) they had a story that just cracked us up. They told us about a very frugal couple they knew who never traveled anywhere, but had to take a trip out of town to see a nephew (?) graduate. Now this couple, who never even liked to travel away from home in their hometown, were really uncomfortable about going out on the road to travel quite a ways south. They had someone give them a Mapquest set of directions, and off they went, needing to use the Illinois toll road to get part of the way there. After paying several tolls and not really understanding why so many in such a short distance, they noticed that people were breezing through the "IPASS" lanes. They thought, well, this "IPASS" lane must be for people who want to use the express lanes...this must be like, when you don't want to play in a card game or sharing circle and you say, "I pass.." So they proceeded to take advantage of the IPASS lanes and zoomed right through them to finish out their trip. Much to their chagrin and misunderstanding later, the toll road people caught up to them through photo ID of their license plate and issued them several hundreds dollars worth of fines  and tickets....as a result, their friend said he would never travel again! True story! Thanks for sharing, Holly and Wayne, and happy traveling! 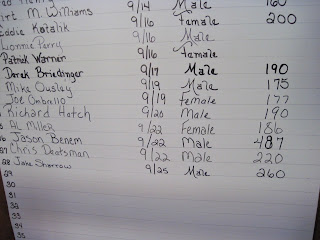 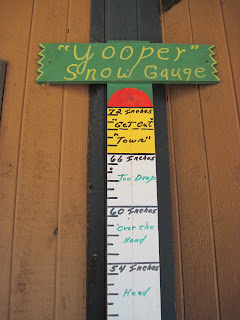 Yesterday, after hiking 2.8 miles to Chapel Falls and then some more hiking to other falls in town, we had really worked up an appetite. We found a tavern on the way back to Munising, called the Bear Trap Tavern. This wasn't quite the man-cave that the Antlers restaurant was in Sault Ste. Marie, (I just had to see if I could still spell that!) but there were a several bear heads displayed, deer mounts, and bear rugs on the walls. This tavern definitely had the hunter/fisherman atmosphere. Great burgers and great fish! We got a kick out of the "Yooper Snow Guide" measuring stick outside the tavern. At 72 inches, it says, "get out of town!"  For anyone who doesn't know, a "Yooper" is a person who lives in the U.P. (upper peninsula). We saw a chart on the wall of bear kills--it's bear season in Michigan right now! The waitress told us there were three bear seasons in Michigan--bait, gun, and bow....There were five bears killed yesterday alone in this area. We had talked to a couple just a short while earlier after coming off the hiking trail, and we asked them if they had seen anything in the woods. They said no,  but they did hear some  loud snorting! They didn't know what the source was, but they said they kept going on the trail (quickly) and did not stop to see what it was. The woman was carrying food, and we now think it might have been a bear in the woods getting a whiff of what she was carrying! Yikes!
Posted by Jeannie and Eldy at 8:29 PM