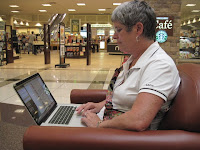 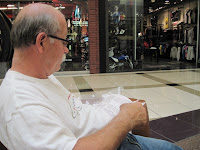 Most of today was spent at the Grand Rapids Mall while we waited for our "laundry list" of things to be fixed was taken care of.  It was a VERY pleasant way to spend the day...there were nice couches and chairs out on the Woodland mall floor, so we plumped ourselves down in front of Barnes and Noble, and Eldy got out his manuals, and I got out my laptop, and we proceeded to settle in for the afternoon.  A few hours later, we checked back in with General, and some of the things were accomplished and some were not. We decided NOT to dump the propane today--that just really bothered us that they were just going to open up the valve and let the propane escape out into the air. We saw two coaches who must have had bad gauges like ours, and propane was being expelled out of both of them. This is not an environmentally friendly solution! We felt that we can come back later after we've used up a lot more propane during the cooler weather and get the gauge fixed at a later date. We discovered some more things that were wrong with the coach. There's a bubble in the body of the motor home under the outside TV, something that is pushing the side out from the inside wall, like a bolt. There were streak marks on the front of the coach that could not be buffed out so they will have to be a new "Diamond Shield" coat applied to the front of the coach. There's a ceramic floor tile that is loose in the living room. All new RVs no matter what price range, have little "bugs" that need to be worked out and we were expecting this.

When we got our Challenger a year and a half ago, we had a cable break on a slide on our first major road trip, a couple of screws came out of the slides because they weren't the right type, one slide cable was broken when we took possession of it and didn't know it, and the shower door weatherstrip kept falling off the bottom of the shower door.  Damon and Total Value took care of anything and everything that we needed. So all in all, we really didn't have very many complaints for the dealer this time. We had an extended warranty on the Challenger, and we went with the extended warranty on this one as there are so many electronics on the Tiffin!

We are on the road (I-75) to the Upper Peninsula of Michigan, and so anxious to test the RV out on a long trip that we got a late start today, around four pm... So far, the ride is fantastic, smooth as butter. The Tiffin has much better brakes than our old coach, and fantastic pickup coming out on the entrance ramp to a highway. I'm going to hold off on driving it until Eldy really knows his stuff about diesels. There will be driving classes offered down the road, and I definitely will take one. Our only complaint out on the road right now is a very loud rattle in the living room under the couch which we will add to our next list of things that need to be fixed. Then again, it smoothed out when we hit smooth road so we'll see...We're not sure where we will end up tonight, only Eldo knows and maybe he doesn't! He keeps me guessing!

It's now 10:35 and we just came off the road. Against our better judgement, we got a late start today, tried to stop at a Yogi Bear Jellystone Park in Grayling, but it was too dark to see the campground site where we were supposed to be able to pull through. After scraping the top of the motor home against some low lying trees, we decided not to jeopardize our new home with trying to find out site when it was so poorly lit we couldn't see anything. Although tired, we pulled of Jellystone and continued on to Gaylord, to Wally World where we will spend tonight. We have some "rules" or guidelines: 1) we try and pull off the road before it gets dark, 2) we try not to travel on less than a third of a tank of fuel, but we just tossed those guidelines out the window tonight because we wanted to get going north! We ended up stopping for our first diesel stop with less than 1/8 of a tank..yikes!  Where we will end up tomorrow is anybody's guess, but it will be before dusk, that's for sure!  See you then!
Posted by Jeannie and Eldy at 10:43 PM