Do we stay or do we go? It's a really hard rain coming down today (Thursday) so we will be sitting tight at our campsite all day. We're trying to decide whether to move to the western side of the state as it's supposed to rain steadily for two days here. There is also a high wind advisory that is going to continue till Saturday at Munising, MI, which is where we were going to go next but we don't want to drive in high winds nor be rocked and rolled by them when we park, if we can avoid it. We'll sit around today and discuss and plan where we are going to go next. I'm going to try out the central vac system while we're rained in. We've also discovered that the hot water heater tank, which is much bigger than our previous one, runs out of hot water faster than our old one did! Oh, no! That's not good! We're going to get out the manuals and see what might be the problem. We only had a six gallon hot water heater on the Challenger and the Tiffin has a ten gallon heater. We should not be running out of hot water! 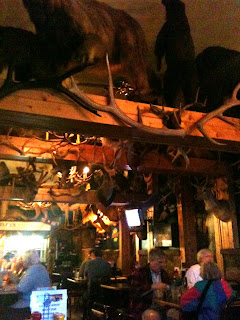 Last night we went to the Antler Restaurant on Portage Ave. just down the street from our campground for a late supper. If you are an avid outdoorsman, you'll love this place. It's a taxidermist's delight--stuffed moose heads, deer, bear, fox, elk, fish, and goats everywhere on the walls with antlers of every shape and size jammed in between the creatures. It seems like there's not an inch of space on the walls and ceiling that isn't covered with antlers or animals. There's even a birch bark canoe hanging from the ceiling! It's very cozy. (Reviewer's translation: dark and cave like) If you are creeped out by preserved animals staring down at you and stuff looking like it could fall off the wall at any moment, you won't like it!  Their steak special for the evening was tough and overcooked, and the twice baked potato was very runny, but we might  have caught them on a bad night. We did like the atmosphere, however!