We are watching everybody leave....We're not quite ready yet to head to HOT Houston....So we decided to stay another week...Rates at Sun 'n' Fun for the first week in May are 170.00. We're under our campground budget for the first time since November of last year! But it's really been a fun time and well worth the extra cost to stay in a place with so many wonderful amenities....

We're waiting to see if an influx of LOVEBUGS comes to Sun 'n' Fun...Yesterday when we were out and about in the Sarasota area we were in a residential neighborhood north of Sarasota and the lovebugs were swarming all over the place. We mean, BIG, HEAVY swarms of them! We were batting them away from us, and every time we opened the car doors, we had to hurry up and shut them, the lovebugs were terrible!

Our last experience of lovebugs was when we were traveling on I-75 in Alligator Alley, two years ago. All of sudden a BUNCH of them hit the windshield, RAT-A-TAT-TAT--SPLAT!  It sounded like gunshot pellets hit the windshield glass. "WHAT THE HELL WAS THAT???!!!" We both turned to each other and said those exact words at the same time. Later we found out it was the infamous Florida LOVEBUGS, also known as the March fly, the "doubleheaded bug", or the honeymoon fly. They cause the most annoyance with traffic and drivers getting splatted on windshields causing vision problems, and into radiators causing overheating problems while driving. Here's a sample of how bad they COULD be! (not our rig!) 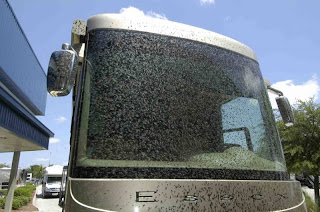 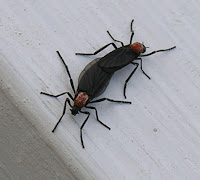 There are two "flights" or swarms in Florida every year. One is in the spring--April-May, the other in August and September. The females live 2-3 days but generate 100-150 eggs a day. When they reach maturity, they spend their entire lives copulating with their mates, attached at the rear of the abdomen.They remain that way even while they are flying! After mating the male dies and is dragged around by the female until she lays her eggs. It's a good thing they don't bite or sting! We asked somebody if we might be seeing them soon in Sarasota, and they just smiled and said, "Oh, yeah..." We're on the watch! We've seen a couple of them so far around our rig, but NOTHING like what we saw a few miles north!

This morning we both played pickle ball, and met some new people from the rally that are here in the park. They came down and played pickleball with us. Sparky is going to roll Eldo back down to the courts tomorrow morning for another game or two--or three or four. ("Sparky, where's the Aleve?" hollers E.) 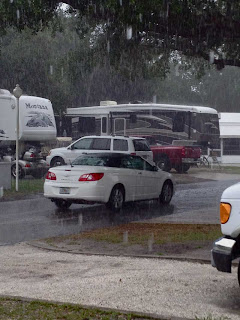 We had our first example of a summer rain shower here in the park. We know, it's not summer yet. But it's hot like summer! The clouds came rolling in, yet there were patches of blue sky. All of a sudden, all hell broke loose and we had a torrential downpour. It lasted less than ten minutes and then it was a gentle rain for another few, and it was done!

Eldy was out grilling under the awning....since there wasn't wind, we managed to get our pork chops cooked on the grill. Sparky made salad, (holy moley! That's right---Sparky made something in the kitchen! says a shocked E. I'm so glad I didn't have to figure out where to take her for a cheap dinner tonight! LOL!) 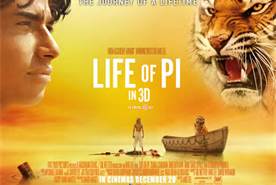 Sparky watched the movie, "Life of Pi"....interesting movie-- A live action/computer animated adventure drama with elements of religion, spirituality and a young man's coming of age.

A 16 year-old Indian boy's passage to a new life in America aboard a freighter ends in a shipwreck in the Pacific. He is left to fend for himself on a life raft with an orangutan, a zebra, a hyena and a Bengal tiger.

The movie is based the book by Yann Martel, Life of Pi, published in 2001, the director being Ang Lee. If you like movies with fantasy elements and marvel at the latest computer technology being used in cinema, you might like this movie...