Hazards of Living in Florida

You wouldn't think there'd be very many, right? Well, there are....We heard on the news this morning, that over 100 people were rescued in ONE DAY by lifeguards at the beaches in Florida yesterday, due to dangerous rip tides...Lifeguards were telling people not to go in the water past your knees, it has been so dangerous lately.....

Sparky started this blog as a lighthearted idea, thinking there really weren't too many hazards of living in the sunshine state. But then, she started investigating....She found a website that the lead line was, "903 Tips and Warnings of Florida Dangers..."  YIKES! What did that one say? It turns out to be a collection of disgruntled tourists who ventured into the wrong neighborhoods in certain cities, senior citizens who got too loud in a public place due to malfunctioning hearing aids (for REAL!) and because they were so being so loud, they were kicked out of a joint in Key West,  (are you sure they weren't drunk? wonders Eldo) and other silly stuff. So, are there any legitimate hazards of living in Florida? Sure, there are...A couple are beach related, but others are not.... 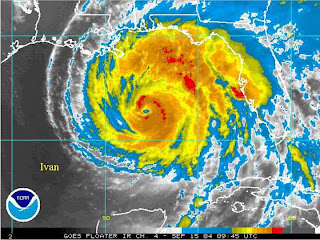 SHARKS! In 2011, Florida had more shark attacks than any other state and the world...The sharks seem to be coming closer to shore than ever before, some researchers are finding...Sharks started hanging out closer to Florida's shores about ten years ago, and scientists really don't know why. Sparky doesn't care to know why, she is just going to avoid going into the waters any more than waist deep, and probably not even that far...She's not a big salt water fan anyway.... Did you know sharks are snowbirds? Yep! They travel north and south up and down the Eastern seaboard just like people do! Sharks travel to Florida in January for warmer temperatures, and by summer, they are more scarce...Guess they head back to northern waters... 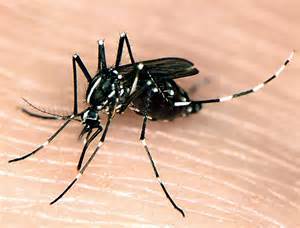 BIGGER, BADDER MOSQUITOES! A new, invasive, non-native mosquito, the Asian Tiger mosquito has established its presence in Florida after accidentally being brought over from Japan in old truck tires headed for recycling in Houston, TX. in 1985. They have rapidly spread throughout the south as most invasive species do. They don't need a lot of water to breed like regular mosquitoes.  They can breed in little water holes in trees or tiny little puddles. That's bad news for Florida!

What's bad about these mosquitoes is they can carry new diseases not common to the area...like dengue fever, which is a incurable virus that causes fever, bad joint pain, and other malaise. They are tiny, can get through cracks and screens more easily than your garden variety of mosquito, and they feed 24 hours a day as opposed to regular mosquitoes that feed mainly at dawn and dusk. So far the only cases of dengue fever have been reported in the tropics and in Key West...

SINKHOLES!  After hearing about the big sinkhole in Seffner, FL this year, where a man died after the sinkhole swallowed up his bedroom while he was sleeping, we thought we'd better check out where  they are in Florida. Unfortunately, the map doesn't show ALL the sinkholes...Egads! There are a lot of places to worry about sinkholes in Florida! Well, just be sure you get sinkhole insurance if you are in a sinkhole prone area. Sinkholes are prevalent where there is limestone under the bedrock, so if you are in an area with sandy soil and a different composition of bedrock, you don't have to worry about sinkholes. 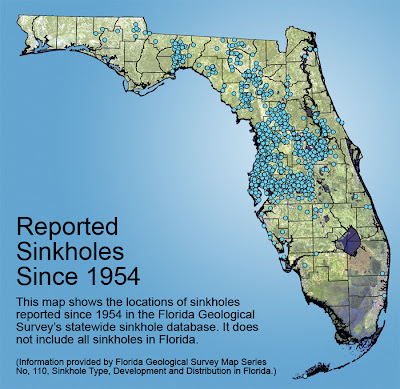 ALLIGATORS!  Not as big a worry as northerners seem to think. Alligators mind their own business usually, and are quite timid when they see humans around UNLESS--people have tried to feed them. Once they associate humans with food, they might tend to become aggressive and come towards you looking for food. They do go after four legged critters that are on the same height plane if they are hungry. We remember seeing a warning sign at Midway Campground in the Everglades that cautioned against letting small dogs roam freely around the campground pond. Sparky and Eldo did the 17 mile Shark Valley bike trail in the Everglades with nary a problem with gators. They were sunning themselves just a few feet from our bikes. Gator after gator we passed. They were laying right on the bike path! We counted about 17 last year when we were down there as we rode past them.

LIGHTNING! Florida is the lightning capital of the U.S., a dubious honor to be sure. An average of 10-12 people a year are struck and killed by lightning in Florida. Central Florida is known as "Lightning Alley." And you thought there was only Tornado Alley and Alligator Alley! With over 100 days a year having thunderstorms here in Florida, lightning is something to pay attention to! Just yesterday, a lady was struck and killed by lightning at a beach in St. Pete's Beach. Lightning even beats out tornado deaths which account for 13% of all weather deaths here in Florida. Lightning deaths account for 53% of weather related deaths in Florida. Time for a review of lightning safety.

Rubber soled shoes are not going to help, car tires, not as much protection as you think. As long as you aren't touching any metal parts and you are inside the car, you should be ok. Stay away from electrical appliances in your home during a thunder/lightning storm, don't take a bath, stay off your corded phone and computer if connected to the wiring system in your house. Beach shelters, metal sheds (duh), picnic shelters, carports are no protection from lightning. Lightning can strike MORE than ten miles away from the center of the thunderstorm, a distance beyond the audible range of thunder. Know the 30-30 Rule: If the "flash to bang" time from seeing lightning to hearing thunder is 30 seconds or less, seek shelter IMMEDIATELY and stay there for 30 minutes or longer. That rule is harder to follow in the Tampa Bay area as storms roll in and out faster than it seems you can blink your eyes. Just like the lady who was killed on the beach yesterday. That storm came in so fast she didn't have time to make it to safety. It would be wise to have a NOAA portable weather radio when spending a lot of time camping outdoors or at the coastal beaches. We've got one, do we use it? Nope! We should!

PYTHONS! A marine biologist who had Burmese pythons for a pet as a kid, caught a record 17-18 foot python at the side of the road in rural Miami-Dade county just the other day. He was traveling in an ATV when he saw the head of the snake poking out of some bushes. So he pulls over and grabs the snake from behind the head.

The snake proceeded to start wrapping himself around the guy, around his legs and arms.  He knew he had to keep the snake from wrapping itself around his neck. There were two other guys with him, thankfully. After ten minutes of them struggling with the snake, they finally cut off the snake's head. The biologist said he wasn't afraid. Who thinks he was lying? :-)

And we thought pythons were only in the Everglades! Not a big worry for the rest of Florida, however...

And related to pythons, VENOMOUS SNAKES! Three kinds of rattlesnakes live here in Florida--the Eastern diamondback, the canebrake, and the dusky pigmy. And then you have the venomous Southern copperhead, the Florida cottonmouth (Sparky saw one of those on a bike trail once not too long ago) and the Eastern coral snake. We saw a rest stop on I-4 heading to Orlando while taking a day trip last month, that had a caution sign: "WARNING! Venomous snakes area."

After Sparky's great tourist promoting for the state of Florida, and in particular, the beautiful city of Sarasota, she'd better quick posting about the hazards....But it was fun learning about all this stuff, though. Hope you learned something, too!

By the way, one last thing...(Sparky's on a roll again, folks!) It's National Trail Day. Go out and show one of your favorite trails where you are some LOVE....Clean it up, pick up trash, walk it! Take some friends with you. Take some photos and share on TrailLink.com   Donate some money to Rails-to-Trails---Sparky's favorite trail website.