We're in a cool down! Woo-hoo! (Don't get too excited, woman. It's only going to be for a couple of days! cautions Eldo.) Well, Sparky is going to really enjoy it while it lasts! Ride her bike, go exploring maybe, spend a lot of time outside....

Eldy has been worried about the coach engine starting...like for the past week. Should he start it? Should he not? Should he wait till the day we're ready to pull out? Should he start it now to see if there are going to be any problems?  He's talked to several Freightliner guys around the country, and at the Tampa RV show Freightliner crew in January. They said it's not necessary to start it, to "exercise" the engine when sitting for a long time. Tiffin has a battery miser that charges the chassis batteries while we are plugged into shore power. There are a lot of electronics in the coach that would run the batteries down if there wasn't some kind of extra charging going on. Then again, lots of people say they do start the engine and let it run for a little bit to get it warmed up.

We hadn't done that because if we did start the engine, the diesel particulate system might go into REGEN (a process where the waste products from the engine are burned out through the exhaust at 1500 degrees) which happens at certain intervals and more so if you are idling or not up to highway speed to burn the exhaust emissions off. You can start a fire under the coach if sitting on dry grass. It's been really dry for a long time in Sarasota until recent rains, so we held off.

And here comes Freightliner to the rescue! They are in the park this week for the NAARVA rally. Eldy went down to talk to them and explained he wanted to try and start the coach. It's been such a long time, he went back and review the manuals to see what to do IF the coach didn't start and wanted to get advice from the guys who know, Freightliner, in case it didn't start. The Freightliner rep, Dwayne Wilkie, offered to come down when he had finished for the day today and help Eldy if there were problems. That was really nice of him! First things first, Eldy checked the oil. He usually does that several times during traveling long distances, and after sitting for long periods of time...it was low. Eldy couldn't find the funnel to fill it, so Dwayne suggested we use an empty water bottle with the bottom cut off. Eureka! Great solution for no funnel! Sparky might suggest that to her daughters to carry a water bottle in case you need to put emergency oil or coolant in the car. 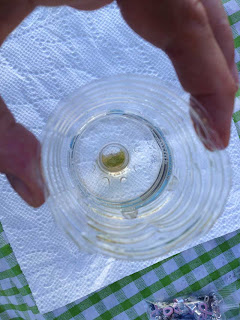 Of course, when a guy opens up the hood of anything that runs, more guys come to check it out with him. Our neighbor stopped by to see what was going on, and all three of them, Eldy, Dwayne, and Brian were at it, checking things out. Do you see how LONG that dipstick is??? Unbelievable! 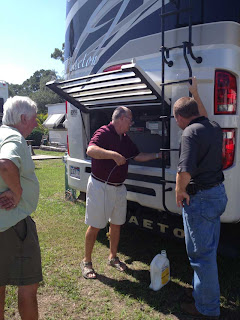 Dwayne even got down under the rig to see what engine we had so he could be certain how many quarts our engine takes...Our particular engine takes 23 quarts of oil...Holey molly! That's a LOT of oil! 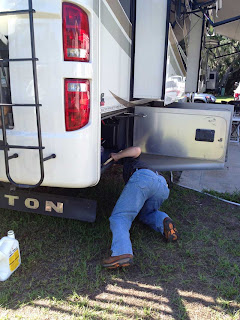 OK, start 'er up, Eldy! The engine fired right up the first time he turned it on! Eldy let it run until the engine warmed up to 140 degrees on the gauge,  to get it warm enough and the fluids circulating enough to avoid condensation and then we shut it down...The fellas watched the gauges to make sure everything was working properly, and it was... 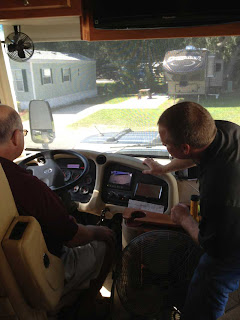 Eldy heaved a big sigh of relief knowing the rig was working the way it was supposed to in regard to the batteries...Mission accomplished! Thank you, Dwayne, for stopping by our site before heading home to your family after a busy day.

Those Freightliner guys are just terrific! Everywhere we've been, they have been SO helpful, so knowledgeable and ready to help us with answers to our questions. We've covered a LOT of territory in the past three years, and we can honestly say, Freightliner really has great customer service and knowledge to help you with your Freightliner chassis.