Grandma Goes to the Mall

Sparky is going to try and keep things a little on the generic side, for the privacy of her daughter and grandchild as per Kerry's request. Today we went to a mall to have some fun! As in chasing Barron around the playground....He had a ball... 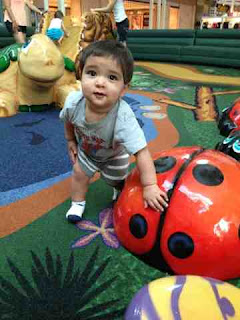 It's a cool playground...lots of shiny, colorful surfaces to pat, touch, and explore the ins and outs of a little kid environment.....He got to ride on his very first horse ride on a carousel and loved it. 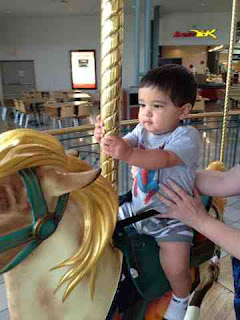 There were so many kids there, we didn't stay long at the playground..Sparky took Barron in the stroller to walk the mall while Kerry went and got her nails done....Barron had a great time looking at an ipad with children's apps on them. Sparky had taken him to the Apple store to get a charger for her phone. While she was there, sitting at the little kids' table with him, she got the brainy idea to charge up her phone using the charging station right there in front of her. So-o-o-o-o, she started to unplug the ipad charger to use for her iphone. She was just going to set the iphone down on the table and use the charger right there when, "WHOOP-WHOOP-WHOOP-WHOOP!!!!!"  Sparky set off the store alarm! An Apple store employee had to crawl under the table to reset the alarm system. Sparky slunk lower in her seat and buried her head in the game with Barron. Oops! Here he is earlier with Kerry at the store enjoying his iPad demo. Future programmer? 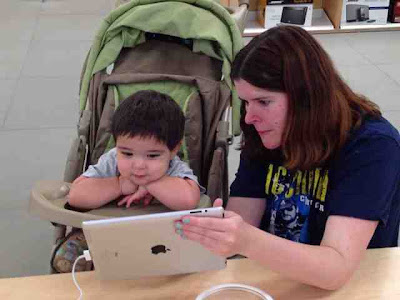 Back home with Kerry....time for a nap for Barron and Grandma....he fell asleep on the way home in the car. 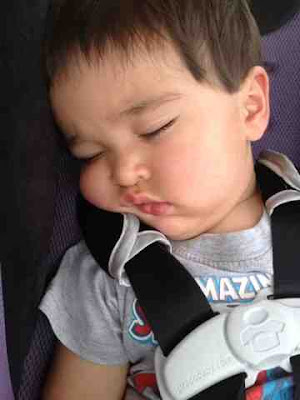 The rest of the day, Kerry ran errands on her own, which she seldom ever gets to do and Sparky played with her little grandson once he got up....Playing with him involves following him around to make sure he doesn't get into mischief, reading his favorite books, and just letting him do his thing with plenty of smooch time from Grandma as well.

What's Eldo doing? This morning he played pickleball! Woo-hoo! And wore himself out!

That's about  it for today....Tomorrow is the start of the Galveston Island Vintage Bathing Beauty contest that Kerry is in. Sparky, Kerry and Barron will be heading to Galveston Island tomorrow for more fun! See you there!

Email ThisBlogThis!Share to TwitterShare to FacebookShare to Pinterest
Labels: Sparky plays at the mall, the Apple store