Sparky and Eldo have not been doing much lately...We're stayed put in Sarasota, because Sparky is headed to Houston soon to see her little grandson and her daughter for a week. After doing some number crunching, Eldy decided to stay put and do some maintenance things on the RV.  It would be cheaper to have Sparky fly out and back, than to spend a lot on fuel there and back in the motorhome. A trip to Red Bay needs to happen one of these days...It didn't make much sense to drive the motorhome out to Houston, then back to Red Bay and then back out to Colorado, which was our original plan....We're not sure what we are doing now except just enjoying Sarasota some more and seeing if we can handle the Florida summer weather which is upon us, even thought it's early May. Sarasota skipped spring altogether, and moved right into summer temperatures. Sparky wants to get some kayaking in one of these days, too, before leaving Sarasota! She's halfway afraid to unpack it and find out if any little critters have made nests or eaten holes in it after being stored under the motorhome for a couple of months. It's now back in the car waiting to be used. Better check it out on land before getting it back into the water!

The pressure is on to find something to blog every day when the days are slow! Sparky has not missed a single day since June, 2010 when we started out, so the pressure is on herself to keep writing every day....Laurie Owens laughed and made a comment that Sparky must have "run out of things to blog about" and it's kinda true! We have done just about everything we wanted to do here in Sarasota. we are missing the more cultured side of things---ballet, symphony, art galleries...those kind of things...We are not into that as much as we are other types of activities and music...But it's all here for any Sarasota resident....

Sparky checked out the indoor pool today...With all the snowbirds just about gone, it's empty much of the time. BUT--Sun 'n' Fun runs a heckuva summer camp program all summer long, and they are gearing up to receive LOTS of daily campers in to use their facilities. It's starting now....The park has the indoor pool set up with the Wibit activities--that inflatable obstacle course and fun objects to climb, slide, and "puddle jump" on. Hard to see in this photo, but it's on the left. 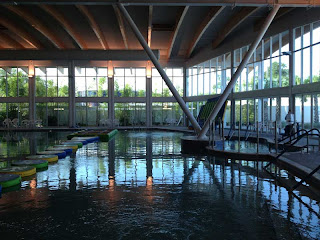 She thinks she might try one of these water bikes soon. These bikes are immersed IN the water and THEN you pedal like crazy. That would be quite the workout, Sparky thinks! 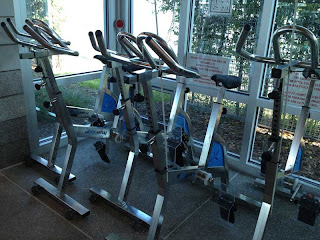 Until Sparky gets to Houston next week, we don't have too much going on...No festivals to speak of close by, no new restaurants to report that we've tried...OH! wait a minute! We decided to test SRQ Magazines's "Best Burger" at Square One restaurant this evening. Overrated, we think...Sparky had a VERY bad-for-you blue (they spell it the French way, "bleu") cheese crumbles Angus burger with lettuce, bacon, tomato, mayo, and red onions on a special type of brioche bun. Good, but the burger wasn't very flavorful. 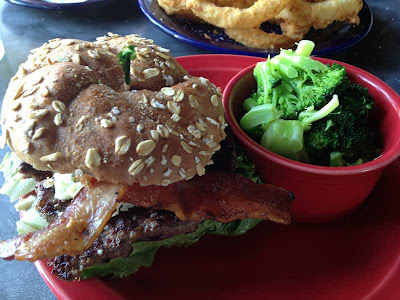 The onion rings were good, but the "Sooner" sauce was so spicy, it set your mouth on fire! For some, the hotter the better, but when all you can feel and taste is the fire, it takes a little away from the appetizer, we think.

Eldy had a more traditional burger, and it was fine, he said...but nothing out of the ordinary. The restaurant has an upscale, edgy, modern feel to the decor... 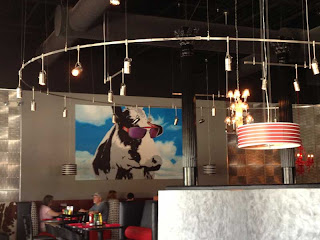 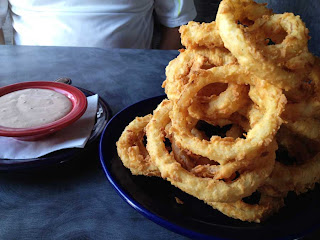 If you want a fancy place for a fancy pricey burger, this is it...12.99 for Sparky's blue cheese burger, 8.99 for Eldy's traditional burger.

Sparky thinks the Hob Knob, a little outdoor diner that serves burgers on Washington Street in Sarasota might the the place to check out for burgers. It's always busy!

So Sparky wants to apologize for a slowdown in blog activity lately....We've just slowed down from exploratory mode into relaxation mode and hope you'll still stick with us, but will understand if you get bored and decide to move on....The blog might evolve into a little different style blog if we stay longer here in Sarasota, that might be interesting to see what that might look like!

Stay tuned.....We'll keep you posted! And we'll keep posting....  :-) Sparky is leaving for Houston soon to see her daughter and little grandson who will be one year old soon...Where has the time gone?????
It seems like it flies faster now that we're retired.....See you later....
Posted by Jeannie and Eldy at 11:55 PM